Google is developing a subscription-based game streaming service that could work either on its Chromecast or a Google-made console, which is still being developed, the Information website reported on Wednesday.

The service, codenamed Yeti, would put Google at the forefront of a new part of the videogame business that lets people play games as they’re being streamed, rather than using downloads or disks, the report said.

The plan that Google has been working on involves use of its cloud servers to broadcast the games to users over the internet, the Information report said, citing people with knowledge of the project.

Google is developing a subscription-based game streaming service that could work either on its Chromecast or a Google-made console, which is still being developed, the Information website reported on Wednesday. Stock image

Google has discussed Yeti with game developers, but it is unclear whether any of them will develop a game specifically for Yeti or only make existing streamed games available, the Information reported.

The report also claims the firm has developed several iterations of Yeti so far, as it discusses the project with ‘top-tier gaming developers,’ according to 9to5Google.

The move wouldn’t be the first time Google has expressed interest in the gaming business. 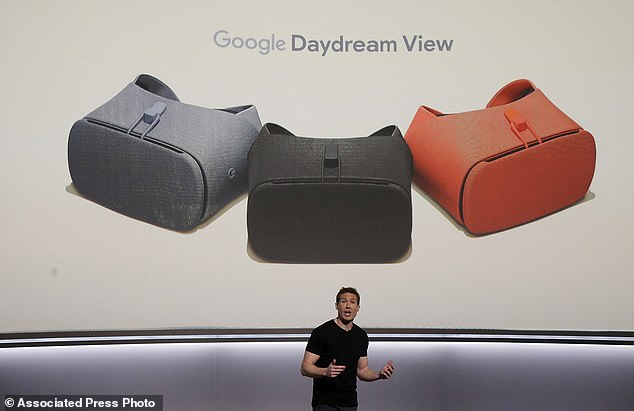 Google’s Juston Payne speaks about the Google Daydream View at a Google event at the SFJAZZ Center in San Francisco, Wednesday

In 2016, the firm unveiled its $79 Daydream VR headset, in a move to make virtual reality more affordable.

But, it only worked with the Pixel phone.

Google later unveiled an updated version of the headset, with compatibility with far more devices.

WHO CAN USE GOOGLE’S DAYDREAM VIEW VR HEADSET?

Users can slip their compatible smartphone into the headset, which works with a small controller that stores on the back of the head strap.

According to Google, the new headset has custom-designed lenses for the widest field of view yet.