Google has been accused of lifting the work of song lyrics website Genius in an effort to stop web users clicking away from the search engine.

Genius provides a database of annotated song lyrics, but web users can often find the words displayed in a Google box without needing to click on a different site.

The lyrics website alleges that Google has been stealing its work – a claim the search giant denies – and says it has developed a secret watermark to prove it.

When they transcribe songs, Genius staff have varied their use of apostrophes – some of them slanted (‘) and others straight (‘), they say. They have then noted down the particular sequence they used.

Now, Genius says it has found exactly the same sequences appearing in more than 100 Google search results, the Wall Street Journal reported – but Google and its affiliates say that is a minuscule proportion of the total volume of songs, and insist that any copying is accidental.

According to the report, the sequence of apostrophes could be converted into Morse code to spell the words: ‘Red Handed’.

Speaking to CNN, Genius executive Ben Gross said Google was lifting lyrics in ‘order to keep users from leaving Google to go to other sites’.

A Google spokesman rejected Genius’s claims but said the tech giant would investigate.

They told MailOnline in a statement: ‘The lyrics displayed in information boxes on Google Search are licensed from a variety of sources and are not scraped from sites on the web.

‘We take data quality and creator rights very seriously, and hold our licensing partners accountable to the terms of our agreement.

‘We’re investigating this issue with our data partners and if we find that partners are not upholding good practices we will end our agreements.’ 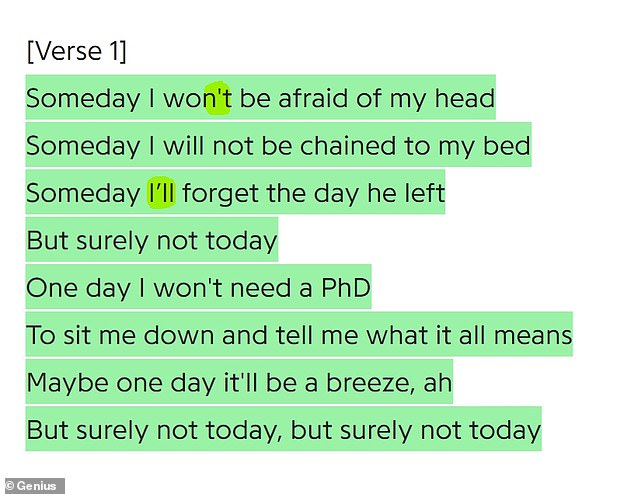 Staff at Genius say they have caught Google out with lyrics such as this one, using different types of apostrophes in a particular sequence. These are the lyrics to Not Today by Alessia Cara, as they appear on Genius 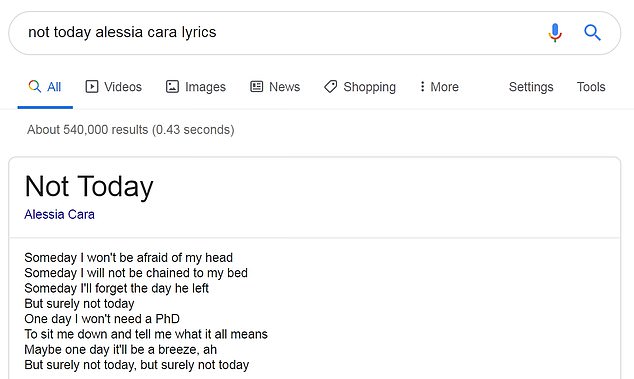 Song lyrics often appear in search results in a box such as this one, meaning that users do not have to click on websites such as Genius to view them

Some of Google’s lyrics are provided via a company called LyricFind.

The Toronto-based firm said it licensed its work properly from music publishers and said to accuse Google of wrongdoing was ‘extremely misleading’.

The firm acknowledged it was possible that ‘our team unknowingly sourced Genius lyrics from another location’ but said it had previously offered to remove them.

‘Genius claims that there are 100 lyrics from Genius in our database,’ a LyricFind statement said.

‘To put this into perspective, our database currently contains nearly 1.5 million lyrics.

‘In the last year alone, our content team created approximately 100,000 new lyric files. The scale of Genius’ claims is minuscule and clearly not systemic.’

‘LyricFind has a fifteen-year history of proper licensing and payments to rightsholders, and we’re extremely proud of our role in creating this valuable revenue stream for songwriters.’