Taking a page out of Apple and Amazon’s playbooks, Google will open it first physical retail store in New York City’s Chelsea neighborhood, the company announced on Thursday.

The new location, which is part of Google’s existing campus in the trendy district, will stock a number of Google products, such as the Pixel 5 smartphone, Nest thermostats and Fitbit smart devices, among others.

The space is designed in a way where ‘customers can experience our hardware and services in a helpful way,’ Jason Rosenthal, Google’s VP, Direct Channels & Membership wrote in a blog post.

The store will be part of Google’s Chelsea campus, which is home to some 11,000 employees 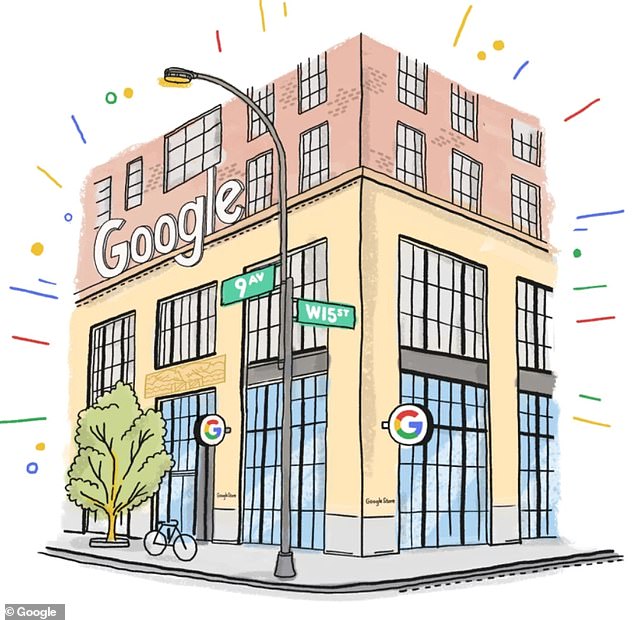 This is not the the company’s first foray into physical retail – it has had a few pop-up stores at different times of the year, but this is its first permanent location.

Rosenthal explained that the area was chosen because Google has been in New York City for the last 20 years ‘and we view the store as a natural extension of our longtime commitment to the city.’

Google noted that the COVID-19 pandemic and the future went into designing the store and shopping experience.

Masks, hand sanitation and social distancing are required inside the store, which will be cleaned ‘multiple times a day.’

The tech giant added it will also limit the number of people inside, while also offering the ability to shop online and pick-up in store from customers ordering on GoogleStore.com.

The spot will open to the public in the summer.

For comparison purposes, Apple has more than 500 retail stores across the world, the first of which opened in May 2001.

In the U.S., it has 271 stores, including nine in New York City alone.

Excluding Whole Foods Market, which Amazon purchased several years ago, Amazon has six kinds of stores to sell products, including two Amazon Books and a Amazon 4-Star store in Manhattan.