Google has redesigned Gmail with self-destructing messages, email snoozing and smart replies as part of its first redesign since 2013.

The company says the expensive overhaul was two years in the making and means it now has improved security and offline functionality.

Users can start using these new updates today  – although it will not immediately be available to everyone – with some features appearing in the coming weeks.

It is Google’s most extensive update to software in its G Suite workplace bundle since accelerating efforts to steal business from its competitor Microsoft Office.

The new look Gmail will also provide ‘nudges’ which are designed to remind users to follow up and respond to forgotten reminders. This will happen via quick reminders that appear next to email messages

Users will be invited to opt in to the new changes from today on – although they are not currently available to everyone.

To get the new features, users should go to Settings (top right corner of the inbox) and select ‘Try the new Gmail’.

In order to go back to the original Gmail, users can go to the same place and select ‘Go back to classic Gmail’.

The new design has smart-assistant features such as ‘suggested replies’ to messages and ‘nudges’ to respond to forgotten emails.

Its in-built AI will flag high-priority notifications which will help users ‘stay focused without interruption’, the company claims.

In the update Gmail will also suggest when users should unsubscribe from newsletters or offers they no longer care about.

Gmail will alert users in bold when it spots something that appears to be a threat.

Generally, the design aims to be less cluttered with side panel that provide access to Google’s other apps such as Calendar. 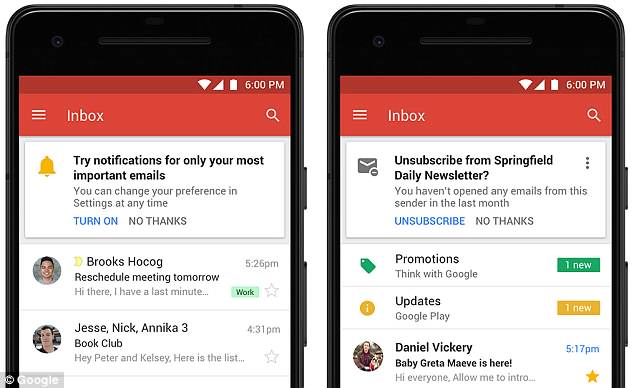 WHAT FEATURES DOES THE NEW GMAIL INCLUDE?

Confidential mode – This stops recipients being able to forward, download or print an email. You can also set expiration dates for specific emails

Smart replies – These will let users rapidly answer with a automatic response.

Personal information cards mean users can see who they are interacting with. These cards contain the individual’s job title, desk location, department and contact information.

In the near future, the company says the Calendar feature will start tracking your work location and suggest meeting rooms for guests.

Attachments can also be viewed and downloaded without opening the email.

‘This is an entire rewrite of our flagship, most-used product,’ said Jacob Bank, product manager lead for Gmail, which 1.4 billion people use each month. 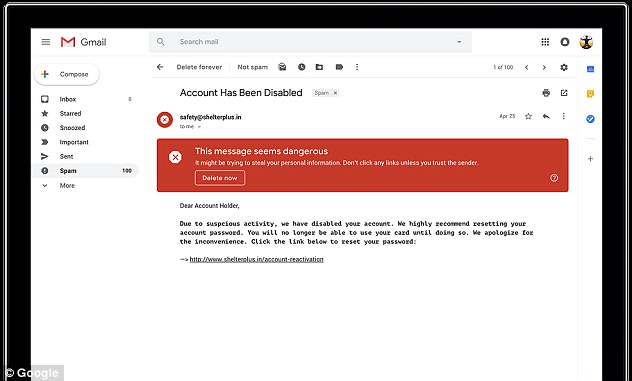 Google declined to specify costs associated with the redesign.

Chief Financial Officer Ruth Porat told analysts that half of the spending resulted from hardware purchases to support expanding use of machine learning.

The new confidential mode allows an email to be sent without the option to forward, copy, download or print it. This is designed to be used for sending sensitive information. Users will also be able to make a message expire after a set period of time. Credit: Google

These automated programs can, among other things, identify spam and predict which emails users would find most important.

Mr Bank said the overhaul was required primarily to provide offline access to up to 90 days of emails for users who turn on the feature.

Users who enable a ‘confidential’ option when sending an email can time-limit its access to recipients and also require they enter a one-time passcode sent to their phones to read it.

Smart Reply is another new feature for Gmail on the web which will allow customers to reply to messages faster and easier with a range of pre-selected replies to choose from . Credit: Google

The company estimated that the ‘nudges’ feature will lead 8 per cent of business users each week to remember to follow-up on something important.

Cosmetic changes bring Gmail’s website in line with Office by placing Google’s calendar, tasks and note-taking services within the same page as emails.

Mr Bank said testers have advanced from ‘neutral to positive to very positive’ on the new look.