Google’s leaders came under fire again on Monday after a former manager’s internal memo accusing the company of discriminating against pregnant women was leaked online.

The unnamed female employee’s document was posted on an internal Google message board before it was obtained and published by Motherboard, which said that it has verified the memo’s authenticity.

In her 2,300 word letter, the ex-team leader announced she would not be returning to work for Google upon completion of her maternity leave because she said the company’s culture was toxic towards new and expecting mothers.

‘I’m sharing this statement because I hope it informs needed change in how Google handles discrimination, harassment and retaliation,’ the woman wrote in her memo. ‘This is a long read, but the details are important in understanding the often drawn-out, isolating and painful experience of victims of discrimination, harassment and retaliation. Also, if anything similar has happened to you, know that you’re not alone.’

The whistleblower claimed she was promoted to her management position more than a year ago by a fellow female Google manager who later made ‘inappropriate comments’ about another expecting female ‘Googler,’ a term for a Google employee.

The memo author said her female boss noted that the subordinate ‘was likely pregnant again and was overly emotional and hard to work with when pregnant.’

‘My manager also discussed this person’s likely pregnancy-related mental health struggles and how it’s difficult because, “you can’t touch employees after they disclose such things.”‘

The memo’s author said she reported her superior’s inappropriate conduct to human resources and was told that others had complained about the same manager who had been given feedback about her behavior. 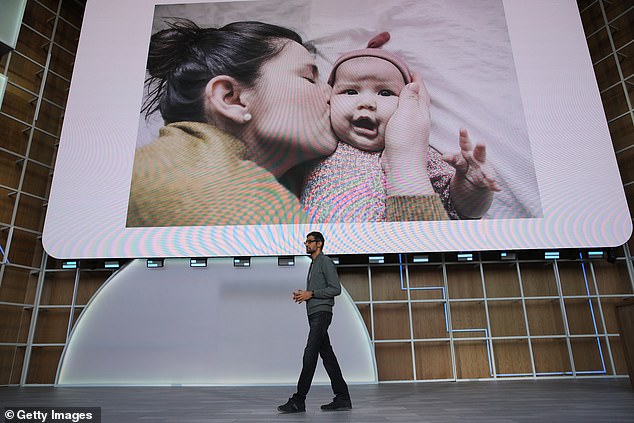 Google CEO Sundar Pichai delivers the keynote address at the 2019 Google I/O conference at Shoreline Amphitheatre on May 07. An unnamed former employee’s memo was obtained by Motherboard after it was posted on an internal Google message board for expecting moms 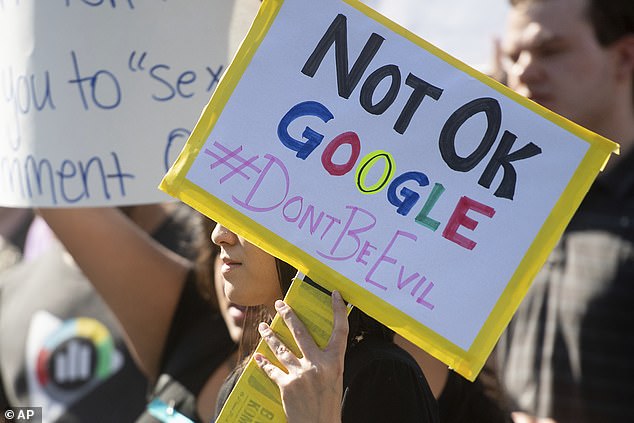 ‘I was told my comments might be shared directly with my boss, but not to worry because strong measures are in place at Google to prevent retaliation,’ she noted.

But the unnamed whistleblower said her manager’s disposition towards her changed dramatically shortly after the discussion with HR.

‘I endured months of angry chats and emails, vetoed projects, her ignoring me during in-person encounters, and public shaming,’ the memo author wrote. ‘The final blow was finding out my manager was sharing reputation-damaging remarks with other more senior Googlers… and actively interviewing candidates to replace me.’

The anonymous author went on to say the stress from the situation made her ‘physically ill’ and kept her from sleeping.

‘I additionally worried how the stress was impacting my gestating baby,’ she said. ‘I needed to remove myself from the abusive environment and thus accepted a management role on another team.’ 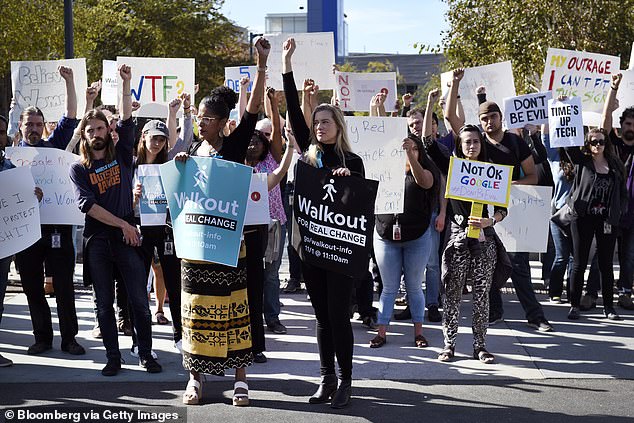 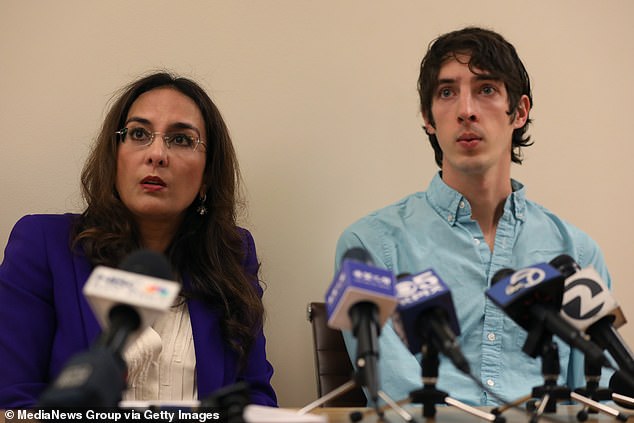 In 2017, Google fired engineer James Damore (right) for violating the company’s code of conduct after he published a memo explaining that women were underrepresented and paid less in the workplace because of inherent differences between the sexes

The struggling manager said she eventually was re-assigned, but was told by her new boss that she wouldn’t start leading her new team until after she returned from maternity leave.

The memo author’s new boss said she feared the maternity leave could ‘stress the team’ and ‘rock the boat,’ the document stated.

The alleged mistreatment continued for some time, according to the whistle blower, who said Google HR later told her its investigators found ‘no evidence of discrimination.’

In an emailed statement, Google declined to comment on the female manager’s allegations, but noted that the company’s rules explicitly ban workplace retaliation.

‘To make sure that no complaint raised goes unheard at Google, we give employees multiple channels to report concerns, including anonymously, and investigate all allegations of retaliation,’ a Google spokesperson wrote.

The discrimination accusations have surfaced nine months after thousands of Google employees at offices around the world staged walkouts over how leaders handled a sexual harassment scandal involving multiple executives, including Android mobile software creator Andy Rubin, who allegedly was paid $90 million to leave his post, according to the New York Times.

Google said it fired 48 people for sexual harassment over the preceding two years.

In January, a shareholder lawsuit was filed accusing Google parent company Alphabet’s board of directors of trying to hide Google’s alleged culture of misconduct by signing off on golden parachute severance packages worth millions.

In 2017, Google fired engineer James Damore for violating the company’s code of conduct after he published a memo explaining that women were underrepresented and paid less in the workplace, not because of sexism, but because of inherent differences between the sexes.