A new Google Maps update means electric car owners will now be able to find the nearest charge point to replenish the batteries in their ultra-low emissions vehicles.

Launched on Wednesday, it not only lets drivers find chargers in their area but also details which brand supplies them and the charging speed of the system.

Drivers can also read reviews left by previous users and give their own rating.

Google to help electric car drivers: The latest update to Google Maps has an ‘EV charging’ search function that allows motorists to find the nearest plug-in point and information about the supplier and charge speeds

Not only will it bring up small red charger icons telling you where available ones are located, it will also give information about what ports are required for each, how many there are at each destination and if they are slow, fast or rapid systems.

The operators responsible for each charger can also add links that will route users to more information about how to use the station.

Additionally, you’ll be able to see what other electric and plug-in hybrid car drivers thought of the station by the reviews they left as well as their photos, if any were taken.

Google Maps will list the whereabouts of charging stations supplied by Tesla and Chargepoint all across the world. 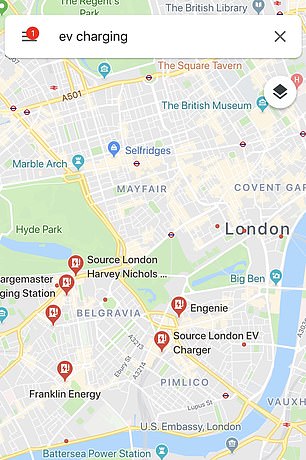 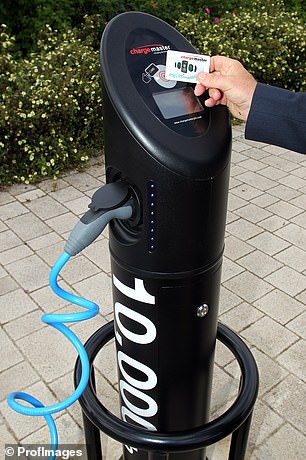 Using the search function, drivers will be able to locate the nearest charger to them. It will also tell users which connectors are compatible with each charging station 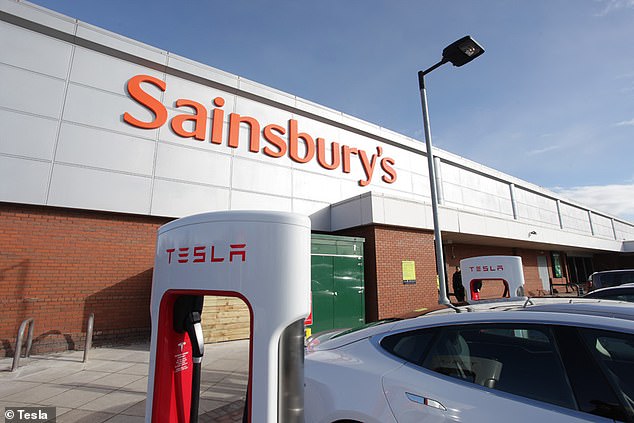 Tesla’s Supercharger stations are listed on the app all around the world. UK users will also be able to see Chargepoint, Chargemaster, POD Point and SourceLondon chargers

UK users will also get information about Chargemaster and Pod Point Stations.

SourceLondon’s network of chargers is also available in the capital.

Drivers in the US will get access to details about SemaConnect, EVgo and Blink stations while Australia and New Zealand EV drivers will see information on Chargefox stations.

The feature is available on both Android and iOS.