Google will use its powerful algorithms to let users rove their photos for text inside an image.

Its new feature, slated to be rolled out in Google Photos, will allow users to search text that appears in photos and then, more importantly, copy and paste that text into a note or document using Google Lens — its image recognition technology.

In a tweet to venture capitalist Hunter Walk, Google acknowledged the feature which he noted had been turned on in his account.

Google photos just got a lot smarter. The company’s AI can now look through your library and pull out text that appear in images.

‘You spotted it! Starting this month, we’re rolling out the ability to search your photos by the text in them,’ said Google in a tweet.

‘Once you find the photo you’re looking for, click the Lens button to easily copy and paste text. Take that, impossible wifi passwords.’

The technology is apparently being rolled out for all users over the course of the next month.

To use the feature, Walk says users can open the Google photos and select screenshot, select the ‘Lens’ feature, highlight the desired text text, and then choose copy/paste.

The features use a Google technology known as ‘on-screen character recognition’ (OCR) to scan your photos and tag them in the app.

After its done tagging your photos, users can then input searchers for words that appear in images.

This allows one to search for things like receipts, passwords, or any other interest that displays a searchable text.

Wow, @googlephotos has OCR to turn screenshots into copy/paste text!

The fact that entire libraries are now searchable suggest that Google is applying the feature to each and every photo one uploads.

As noted by The Verge, the features seem to hearken back to an initiative in 2017 when Google said it was developing technology that understands the ‘context’ of photos, allowing wielders to automate certain processes like inputting WiFi passwords.

Googles new features will complement other such features of its Google Lens app which allow people to use their cameras to help facilitate web searchers by taking pictures of things like business cards to find company information.

IOCR has also been deployed to catalog users photos by object, recognizing the difference between, say, a dog and flower. In 2018 the company announced that Lens can now identify more than one billion items.

CAN AI JUDGE IF YOU HAVE THE FACE OF A CRIMINAL?

A controversial paper investigated whether a computer could detect if a human could be a criminal, by analysing their facial features.

730 of the photos belonged to criminals – although the images were not mugshots. 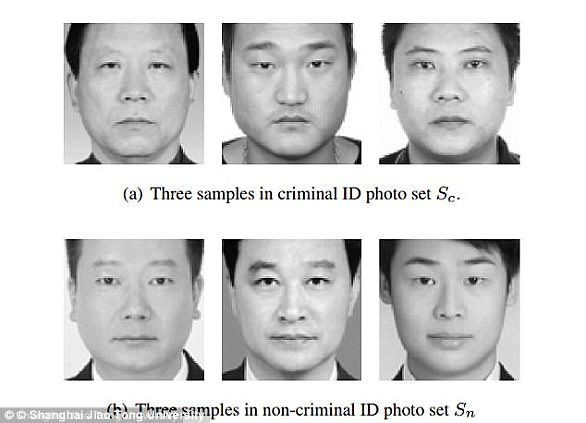 Last year, a controversial paper was released which investigated whether a computer could detect if a human could be a criminal, by analysing their facial features. The results suggest that people with smaller mouths, curvier upper lips and closer-set eyes (pictured top), are more likely to be criminals

The images were fed into a machine learning algorithm, which used four different methods (classifiers) of analysing facial features, to infer criminality.

The researchers write: ‘All four classifiers perform consistently well and produce evidence for the validity of automated face-induced inference on criminality, despite the historical controversy surrounding the topic.

‘Also, we find some discriminating structural features for predicting criminality, such as lip curvature, eye inner corner distance, and the so-called nose-mouth angle.’