YouTube has removed more than 300 video adverts for President Trump but the company has refused to say why.

The removal of the video clips promoting Donald Trump are revealed in a transparency report but CEO Susan Wojcicki remained tight-lipped about why the ads were yanked.

When Wojcicki responded: ‘There are ads of President Trump that were not approved to run on Google or YouTube, ‘ she told 60 Minutes correspondent Lesley Stahl when asked by if the video sharing platform had yanked any Trump ads.

Wojcicki added about the clips on the user generated site, ‘Well, they’re available in our transparency report.’

YouTube CEO Susan Wojcicki told 60 Minutes: ‘There are ads of President Trump that were not approved to run on Google or YouTube’ but she wouldn’t say how they violated policy 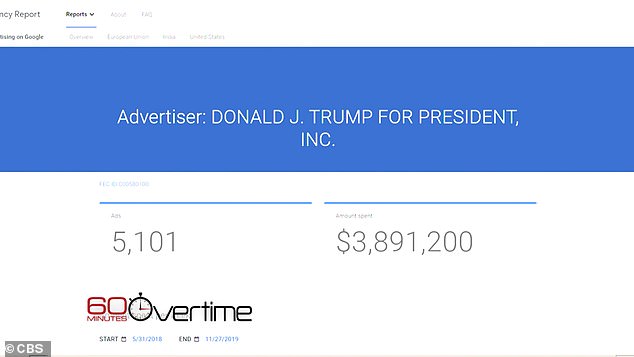 Transparency report shows that 5,101 ads were posted under Donald J. Trump For President Inc. and $3,891,200 was paid to parent company Google 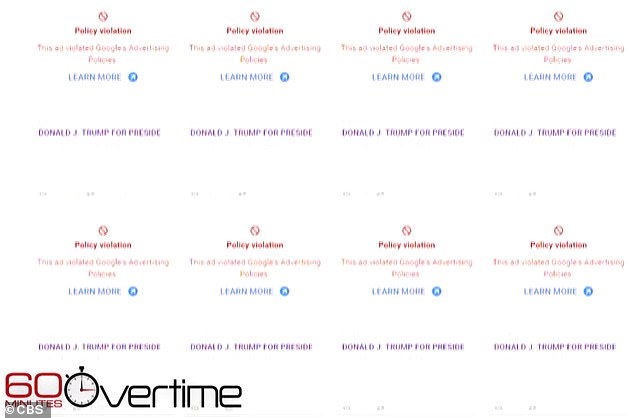 It isn’t transparent what policy the videos may have violated whether copyright or factual inaccuracies.

The program noted that they were online for a few days before removal – mainly during the summer – and YouTube got paid for them.

Stahl said it was likely the clips had reached their target audience before they were removed.

Wojcicki noted that a Trump ad Facebook pulled down for spreading lies about Joe Biden offering Ukraine $1billion to stop an investigation into his son Hunter, was not a violation of their rules.

Asked whether that advert was available on the website she said: ‘It has been.’ 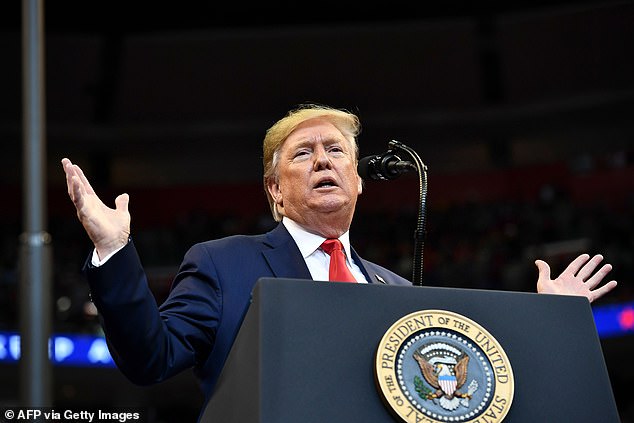 Wojcicki noted that a Trump ad Facebook pulled down for spreading lies about Joe Biden offering Ukraine $1billion to stop an investigation into his son Hunter, was not a violation of their rules

Google has said that, beginning in January in the United States, advertisers will only be able to target political ads based on broad categories such as sex, age and postal code. Currently, ads can be tailored to more specific groups, such as political affiliation.

Google’s announcement follows the decision by Twitter to ban political ads. Twitter also placed restrictions on ads related to social causes such as climate change or abortion rights. Twitter said the move would help reduce the flow of election-related misinformation.

The Trump campaign protested that change as well but said Google’s will have more impact.

The Trump campaign and Republican groups said Trump has built the greatest digital operation in politics, so Google’s decision will ‘disproportionately impact both the Trump operation and all of the Republican candidates and organisations that derive strength from it.’ 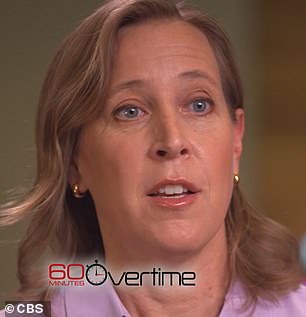 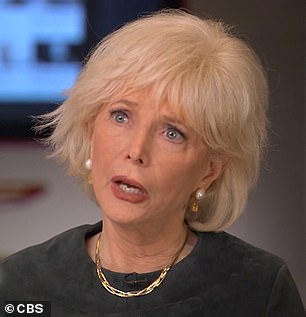 Questioned by correspondent Lesley Stahl (right), Wojcicki (left) insisted their systems ‘don’t have any concept of political bias built into them in any way’

‘Tech companies should not reduce the power of the grassroots just because it is easier than addressing abuse on their platforms,’ said leaders of the Democratic National Committee and allied groups helping oversee Democratic congressional campaigns.

Probed about conservatives who think YouTube and parent Google discriminates against them, Wojcicki said they are also criticized from the Liberal side and explained that their algorithm doesn’t have the capacity to have political bias.

‘Well, first of all there are lots of very successful conservative creators on YouTube… Our systems, our algorithms, they don’t have any concept of understanding what’s a Democrat, what’s a Republican,’ Wojcicki said.

‘They don’t have any concept of political bias built into them in any way. And we do hear this criticism from all sides.

‘We also have people who come from more liberal backgrounds who complain about discrimination. And so I think that no matter who you are, we are trying to enforce our policies in a consistent way for everybody.’