Google is facing an onset of privacy concerns after it announced it plans to dissolve the Nest brand in favor of a new, all-purpose smart home division, called Google Nest.

As part of the decision, existing users of Nest smart thermostats, security cameras and other products will be forced to migrate their information over to a Google account.

The announcement, made at Google’s I/O developer conference last week, has caught the eye of some users and experts who say it gives them little control over the future of their Nest data and, as a result, their privacy.

Google is facing an onset of privacy concerns after it announced it plans to dissolve the Nest brand in favor of a new, all-purpose smart home division, called Google Nest

When Google acquired Nest in 2014 for $3.2 billion, Nest pledged to keep the data it collects on its users separate from Googles other services.

‘When you work with Nest and use Nest products, that data does not go into the greater Google or any of its other business units,’ Tony Fadell, former CEO of Nest, told BBC in 2015.

‘So, just when you say we may be owned by Google, it doesn’t mean that the data is open to everyone inside the company or even any other business group – and vice versa.’

Now that the two firms are officially merging, the Nest data is fair game for Google, so that users’ ‘devices and services can work even better together,’ the company says.

‘We strongly recommend account migration to Google for all of our users,’ Nest said in a post breaking down the move.

‘Having a single account will also enable Nest and Google Home devices and services to work more seamlessly together – for example, if you have a Nest thermostat and a Google Home, just say, “Hey Google, make it warmer” to turn up the heat without any additional setup.’

If Nest users choose not to create a Google account, they’ll miss out on future services and updates. 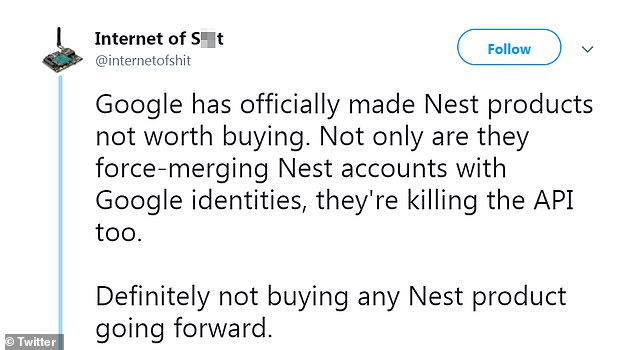 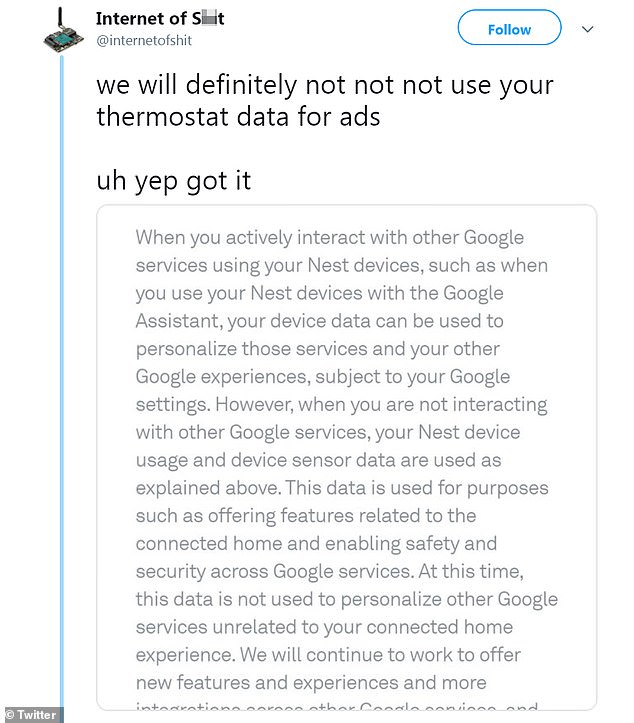 Google has since developed a lengthy set of privacy principles in an attempt to be transparent about how it handles user data.

In it, the company explains that it won’t use audio recordings and video footage collected by Nest devices for the purpose of ad targeting or promotions.

Similarly, data collected from Nests sensors, which can include things like motion activity or the temperature of your home, won’t be used to generate personalized ads or promotions.

However, it may be used for ‘improving and personalizing your google services and developing new ones…and for keeping you informed of relevant google products, services and updates.’

Nest made a promise not to share data from its products with ‘unrelated’ Google services, but the way it’s worded makes it seem that this could change.

‘At this time, this data is not used to personalize other Google services unrelated to your connected home experience,’ Nest states.

‘We will continue to work to offer new features and experiences and more integrations across other Google services, and as we do that, we’ll be transparent and give you controls to manage your information.’ 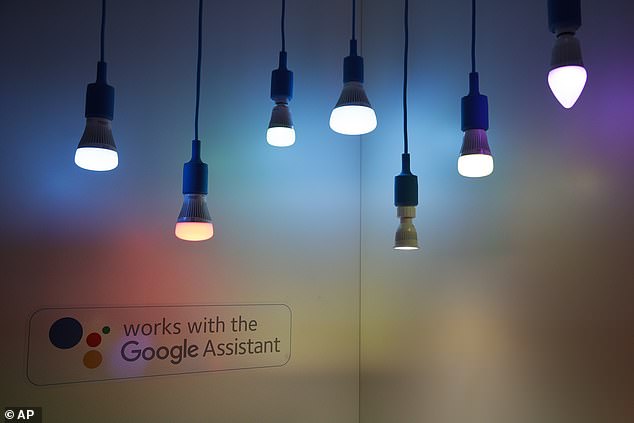 When Google acquired Nest in 2014 for $3.2 billion, Nest pledged to keep the data it collects on its users separate from Googles other services. With the merger, that will soon change

Additionally, both Nest and Google say that any user interactions with its AI Assistant can be used to generate targeted advertisements.

The Works with Nest program allowed other device manufacturers to integrate with Nest devices.

Google getting rid of this program is a proactive move, in order to limit the amount of user data third parties have access to.

Under the Works with Google Assistant program, developers will have to integrate their devices not just with Google Nest, but also Google Assistant, giving ‘small numbers of thoroughly vetted partners access to additional data,’ according to Variety.

For many Nest users, having the choice to keep their data separate from Google was important, but with the two companies officially merged, they’re left with little recourse other than to hand over their data.