Travelers looking to book on Google Flights can get carbon emission estimates for nearly every flight, right next to the price and duration.

Shoppers searching for major appliances will now get details on which models are more energy efficient.

The updates were announced by Google CEO Sundar Pichai on Tuesday at a special Sustainable with Google presentation held virtually, and come after North America set records for the hottest June and July in recorded history.

Google Travel now provides carbon emission estimates for nearly every flight, right next to the price and duration. The rates factor in things like the age of the aircraft and which seat the passenger has chosen, as first class takes up more room

Estimates for carbon emissions on Google Flights are pulled from data from the European Environmental Agency, as well as flight-specific information from airlines and other providers, according to Richard Holden, Google’s vice-president of travel product.

‘It’s critical that people can find consistent and accurate carbon emissions estimates no matter where they want to research or book their trip,’ Holden said in a blog post on Tuesday.

The results are fairly granular, drilling down into the age of the aircraft and which class seat the user has selected, since newer aircraft are generally less polluting and first-class and premium seats take up more space ‘and account for a larger share of total emissions,’ Holden said.

Flights with significantly lower emissions are labeled with a green badge and users can filter their results by ‘greenest’ flights, much as they would cheapest or fastest trip.. 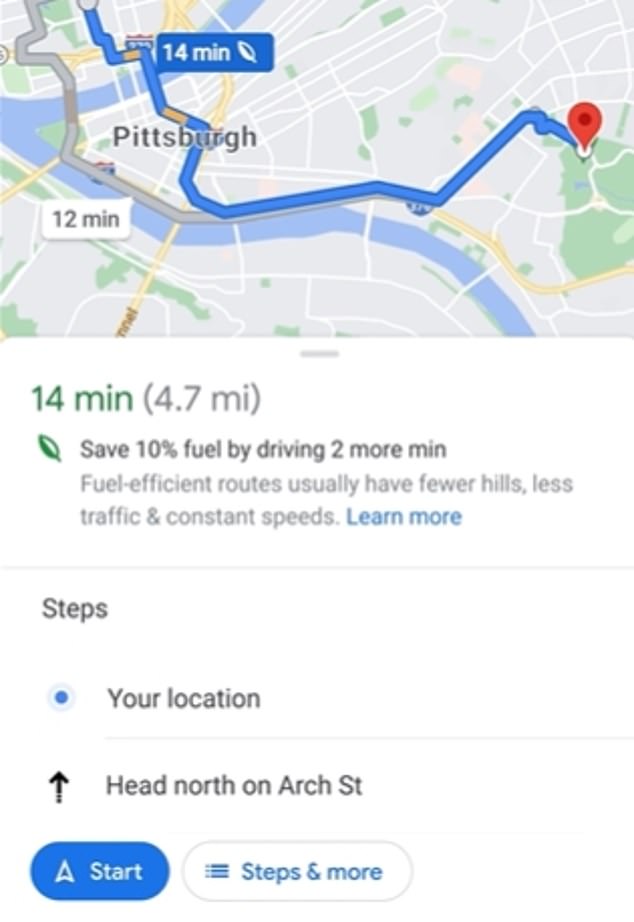 In addition to filtering for the shortest path, Google Map users can select routes that are more energy efficient

Hotels that receive the green badge have been verified independently from organizations such as Green Key or EarthCheck, Google said in a statement.

Relying on insights from the U.S. Department of Energy’s National Renewable Energy Laboratory (NREL), Google Map’s eco-friendly routing is rolling out now on Android and iOS in the U.S., with plans to expand to Europe and elsewhere next year. 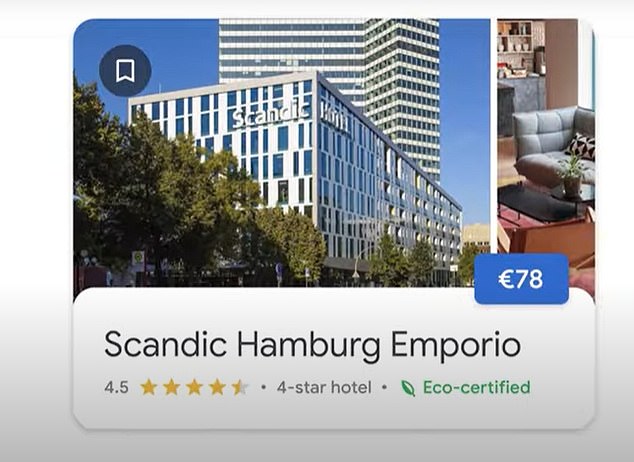 Google boasts the feature has the potential to prevent over one million tons of carbon emissions per year, the equivalent of removing more than 200,000 cars from the road.

‘Not only does Google Maps’ eco-friendly routing bring NREL’s fuel-efficient technology from the lab to the road, but it has huge potential to significantly lower emissions and save drivers money on gas,’ Jeff Gonder, a researcher with NREL’s Center for Integrated Mobility Sciences, said in the release.

‘Something that’s good for both people and the planet.’

If there’s a significant difference between the fastest route and the most fuel-efficient, users can choose whichever they prefer.

To encourage even more environmentally friendly travel, Google Maps has also expanded bike and scooter share information for some 300 cities worldwide and will add a ‘Lite navigation’ feature for Android and iOS in the coming months that will allow bicyclists to quickly get updates on their progress and real-time ETA without having to constantly pull their phone out of their pocket.

Google has also established a dedicated results page that will pop up when users search for information on climate change, with reliable information from sources like the United Nations hopefully helping to dispel misinformation. 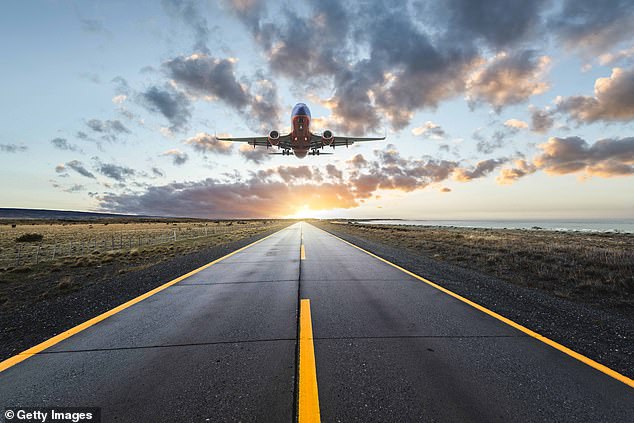 Richard Holden, Google’s vice-president of travel product, said, ‘It’s critical that people can find consistent and accurate carbon emissions estimates no matter where they want to research or book their trip’

In August, the National Oceanic and Atmospheric Administration released a report indicating the combined land and ocean-surface temperature in July was 1.67F (0.93C) above the 20th-century average of 60.4 (15.8C), the hottest since record keeping started 142 years ago.

‘Around the world, wildfires, flooding, and other extreme weather continue to affect our health, our economies, and our future together on our planet. We need urgent and meaningful solutions to address this pressing challenge.’

Google has vowed to run its data centers and campuses on 24/7 carbon-free energy by 2030, a ‘moonshot’ that Pichai described as ‘a physical manifestation of our commitment to sustainability, one that goes back to our founding 23 years ago.’

Right now, its data centers are running 67 percent carbon-free, up slightly from 61 percent two years ago.

While Pichai admitted Google had a big responsibility in developing a more sustainable future, he said users had to do their part, as well.

Google also launched a new service, Nest Renew, which allows Nest thermostats to automatically shift electricity usage for heating and cooling to times when energy is cleaner or less expensive. 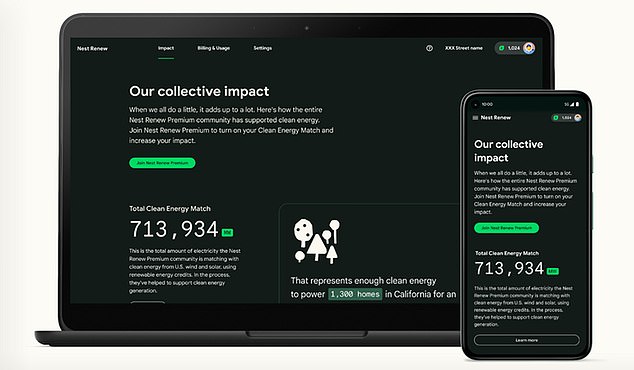 The Nest Renew will allow users to automatically shift electricity usage for things like heating and cooling to times when energy is cleaner or less expensive. They’ll also receive monthly reports on their energy impact

With a $10 Renew Premium subscription, you can also match your fossil-fuel-based electricity at home with high-quality renewable energy credits generated from projects in Google’s portfolio.

The eco-friendly additions are just the latest updates the Mountain View, California-based company has made to address pressing environmental and public health issues.

The information is also available on Google Search, when a user looks up a term like ‘California wildfires’ or searches for details on a specific fire.

In September 2020, Maps added a layer giving users updated information on the rate of new coronavirus infections in their region.

In April of this year, COVID vaccination sites were added.