Google announced today that its annual hardware event will take place September 30 at 11am PT.

‘Launch Night In,’ a virtual event which will be livestreamed to the public, is expected to include details about several new products, including two new Pixel phones, a smart speaker and the successor to Google Chromecast.

In a blog post in August, Google teased it would be sharing info on new devices as well as its approach to 5G ‘in the coming months.’

‘This fall, we’ll have two more devices to talk about: The Pixel 4a (5G), starting at $499, and Pixel 5, both with 5G2 to make streaming videos, downloading content and playing games on Stadia or other platforms faster and smoother than ever,’

Both phones will be available in the US, Canada, the UK, Ireland, France, Germany, Japan, Taiwan and Australia.

Google’s annual hardware event will be held online September 30, when details about two new Pixel phones, a smart speaker, and the successor to Chromecast are expected to be shared

Google unveiled details about the highly anticipated Pixel 4a smartphone in August, after months of pandemic-related delays.

Unlike its predecessors, which operate via smartphone, it’s expected to have a physical remote.

According to leaked images, the Pixel 5 will have a single selfie camera in the top left corner of its front display, with a rectangular camera bump with three sensors and a flash on the back. 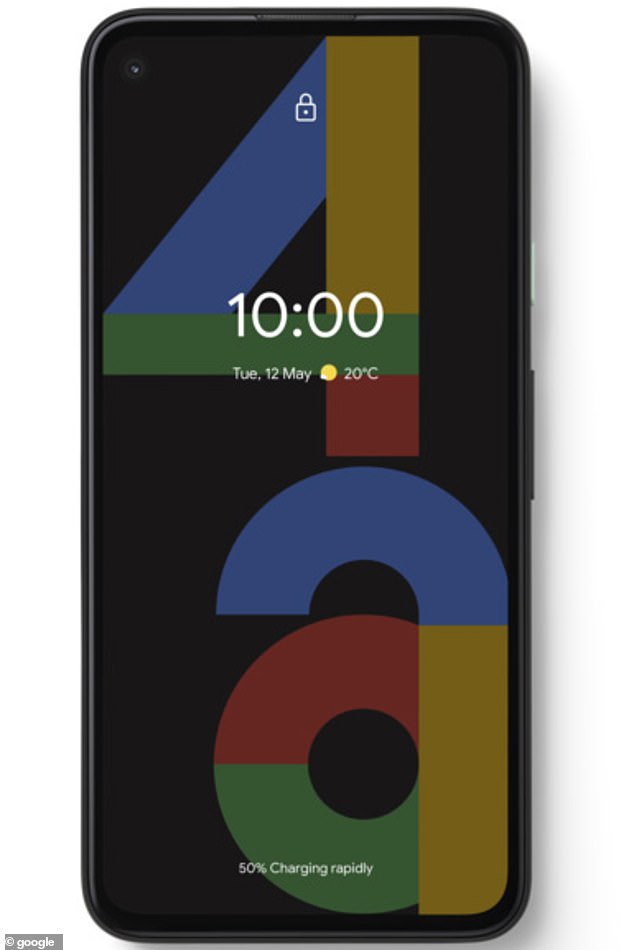 Google unveiled the much anticipated Pixel 4a in August after months of coronavirus-related delays. At the September 30 event, it will reveal details on the 5G-powered Pixel 5 and 4a smartphones

Both the Pixel 5 and the 4a are expected to be powered by the Snapdragon 765 and offer 5G network connectivity as standard.

The 5.8-inch Pixel 5 will be carved out of aluminum, according to reports, while the 6.1-inch Pixel 4a will have a plastic build.

The rumored new smart speaker will likely be an update to the Google Home, Android Authority reports, revamped with Nest branding.

‘Sabrina’ went before the FCC for regulatory approval in August, and the 5G-powered Pixel 4a and Pixel 5 were submitted to the agency earlier this month.

It was a big day of announcements for the online giant: Google also shared that it plans to operate entirely on carbon-free energy by the year 2030.

The company revealed that it has purchased enough carbon credits to virtually cancel out all the carbon dioxide emissions it’s produced since its founding in 1998.

“The science is clear: The world must act now if we’re going to avert the worst consequences of climate change,” Google CEO Sundar Pichai wrote in a blog post. “We are committed to doing our part.”

While Google has been carbon neutral since 2007, that only means it’s offset its carbon footprint by investing in renewable energy.

In 2018 alone, Google released 4.9 million metric tons of greenhouse gases, The Verge reported, equal to about a million automobiles.

iPhone SE vs Pixel 4a

Available for pre-order September 10 and on sale October 1