GOP Congressman Jim Banks has launched a scathing attack on presidential candidate Pete Buttigieg after a doctor who ran an abortion clinic in his Indiana town was found to have 2,000 fetal remains in his home when he died.

Banks is among those lawmakers demanding an investigation after more than 2,000 medically preserved fetal remains were found inside the home of Dr Ulrich Klopfer – who performed abortions in various Indiana clinics – after he died on September 3.

Klopfer used to perform abortions at the now-shuttered Women’s Pavilion clinic in South Bend where Buttigieg is Mayor before the doctor’s license was suspended in 2016.

Buttigieg has not yet commented in the wake of the grisly discovery inside Klopfer’s home. 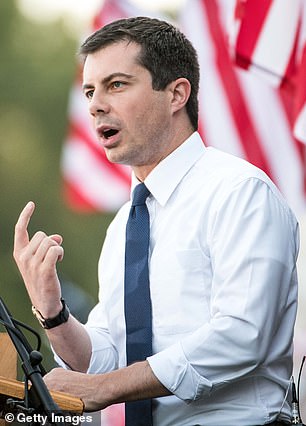 GOP Congressman Jim Banks has launched a scathing attack on presidential candidate Pete Buttigieg after a doctor who ran an abortion clinic in his Indiana town was found to have 2,000 fetal remains in his home when he died

Banks has since slammed Buttigieg on Twitter for his pro-abortion stance and accused him of supporting a new abortion clinic that opened up in its place that was said to have the ‘same kind of profile as Dr Klopfer’ given some employees were the same.

He also criticized Buttigieg for vetoing last year an anti-abortion clinic’s request to open up next door to the abortion facility.

Whole Women’s Health is the abortion clinic that opened up after the late Klopfer’s clinic was forced to shut in 2016. When the clinic was still in its planning stages, an anti-abortion group requested to open up next door.

Buttigieg vetoed the request last year because he said it wouldn’t be responsible to have two opposing groups situated in such close proximity.

At the time, Buttigieg cited the potential harassment patients going to the abortion clinic might face from those who are pro-life.

The anti-abortion facility went on to find another location in South Bend.

In his Twitter rant, Banks accused Buttigieg of supporting the abortion clinic and obstructing the alternative facility.

He linked it to the revelations of the fetal remains found in Klopfer’s house and demanded Buttigieg apologize. 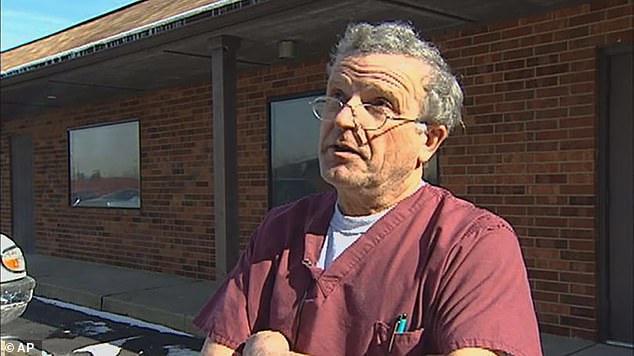 Banks is among those lawmakers demanding an investigation after more than 2,000 medically preserved fetal remains were found inside the home of Dr Ulrich Klopfer (above in 2015) – who performed abortions in various Indiana clinics – after he died on September 3 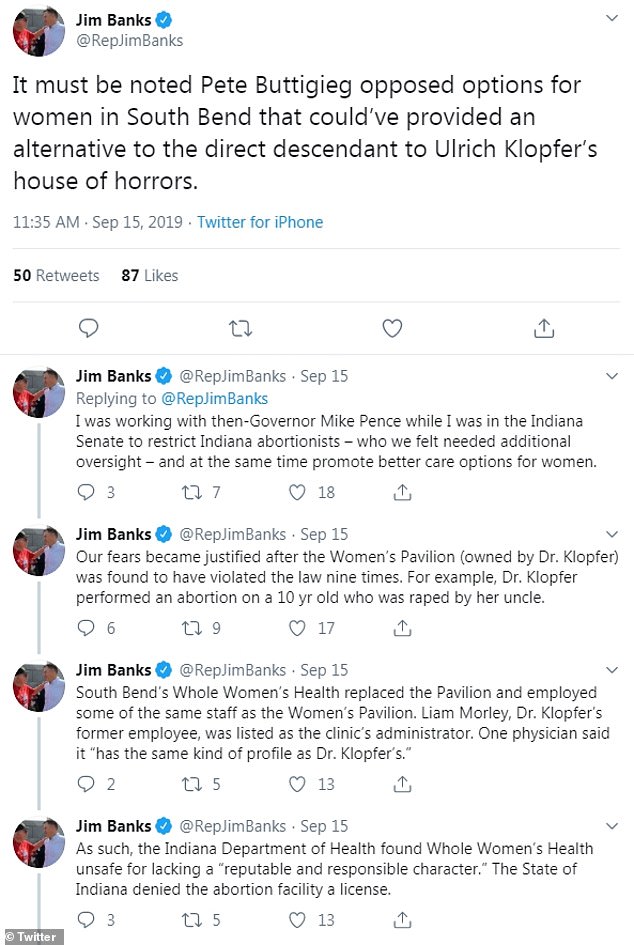 ‘Now that this has come to light, Mayor Pete Buttigieg should apologize for his actions and his flagrant disregard for the state of Indiana’s skepticism towards Whole Women’s Health,’ Banks tweeted.

Banks was among those to call for an investigation following the discovery at Klopfer’s home to see if anyone else was involved.

Indiana’s attorney general Curtis Hill said on Monday that he will work with his Illinois counterpart to investigate what he called the ‘grisly discovery’.

He said he and Democratic Illinois Attorney General Kwame Raoul have ‘agreed to work together’ as Hill’s office coordinates an investigation of the remains.

‘The grisly discovery of these fetal remains at the Illinois home of a deceased abortion doctor shocks the conscience. Further, we have reason to believe there is an Indiana connection to these remains,’ he said in a statement.

Hill’s statement did not elaborate on what specifically would be investigated. Raoul’s office said it has agreed to assist Hill with contacting authorities in Illinois.

Judd Deere, a White House spokesman, issued a statement Monday evening decrying the situation and calling for a full investigation to determine if anyone else was involved and whether crimes were committed.

The Will County Sheriff’s Office in northeastern Illinois announced late Friday that Klopfer’s relatives had discovered 2,246 preserved fetal remains while sorting through his property.

The county coroner’s office has taken possession of those remains, and it, the sheriff’s department and local prosecutors were already investigating. 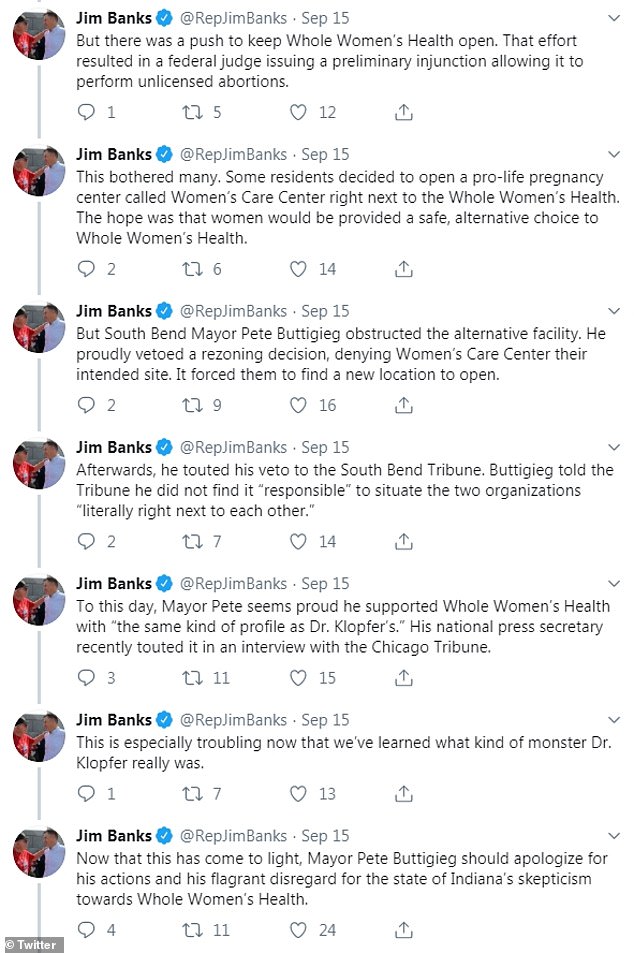 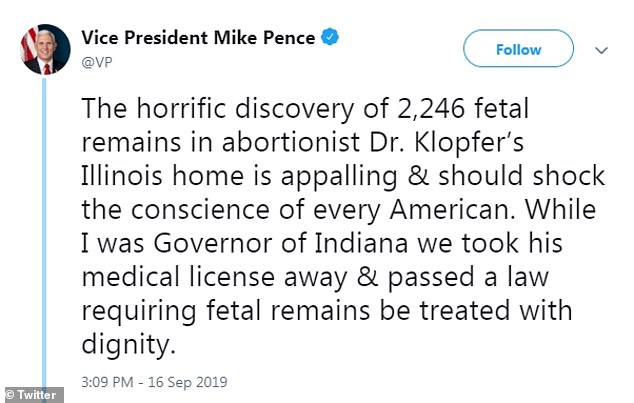 Hill’s announcement came after several Indiana lawmakers called for his office to investigate whether the remains were illegally transported across state lines.

Lawmakers are also seeking a probe of the shuttered clinics in Allen, Lake and St. Joseph’s counties where Klopfer had performed abortions to make sure no fetal remains are being stored at the former clinics in Fort Wayne, Gary and South Bend.

Indiana state Rep. Ron Bacon, a Chandler Republican, called the discovery at Klopfer’s home ‘seriously disturbing.’ He also expressed concern that ‘there may be other remains in the Indiana clinics where he performed abortions.’

‘We have a lot of work to do to make sure this never, ever happens again,’ said Republican Sen. Liz Brown of Fort Wayne.

Republican Gov. Eric Holcomb issued a statement saying he was ‘deeply disturbed’ by the discovery of the fetal remains and that he supports ‘calls for a federal investigation.’ His statement followed Republican U.S. Rep. Jackie Walorski’s request Saturday that state and federal authorities ‘conduct a full investigation into this case and take any steps necessary to protect Hoosiers, including the unborn, from unsafe practitioners.’

Klopfer was believed to be Indiana’s most prolific abortion doctor, performing thousands of procedures over several decades, the South Bend Tribune reported.

The U.S. Supreme Court in May upheld a 2016 Indiana law requiring burial or cremation of fetal remains after an abortion. Before that, clinics could turn over fetal remains to processors who handle disposal of human tissues or other medical material by incineration.

However, Klopfer’s clinics in Fort Wayne, Gary and South Bend closed years before his death.

The state revoked the South Bend clinic’s license in 2015. The Indiana State Department of Health had previously issued complaints against the clinic, accusing it of lacking a registry of patients, policies regarding medical abortion, and a governing body to determine policies. The agency also accused the clinic of failing to document that patients get state-mandated education at least 18 hours before an abortion.

Klopfer’s license was suspended by Indiana’s Medical Licensing Board in November 2016 after it found a number of violations, including a failure to ensure that qualified staff was present when patients received or recovered from medications given before and during abortion procedures.

Klopfer was no longer practicing by that time, but he told the panel he had never lost a patient in 43 years of doing abortions.