By Cian Cheesbrough For Mailonline and Brian Homewood, Reuters

Genoa’s veteran striker Goran Pandev scored a remarkable goal from near the halfway line but turned villain in the second half when he was booked twice in four minutes and sent off in a dramatic 2-2 draw at Lecce on Sunday.

Genoa, who led 2-0 at halftime, finished with nine men in the Serie A relegation battle while Lecce drew 2-2 for the third successive home game.

The 36-year-old was part of the Inter Milan side that won the treble of the Champions League, Serie A and the Coppa Italia under Jose Mourinho in 2010. 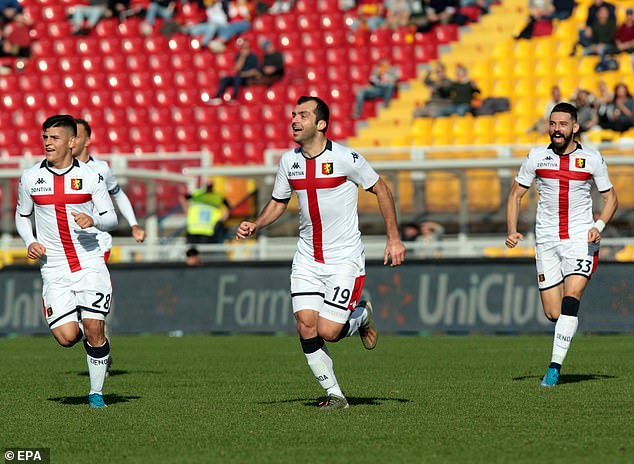 Pandev struck in the 31st minute when Lecce goalkeeper Gabriel sent a clearance straight to him and the North Macedonian controlled the ball on his chest and immediately sent a long, looping shot into the net from around 40 metres.

The Macedonian also won the penalty which Domenico Criscito converted in first-half stoppage time to make it 2-0.

Genoa nearly had a third in the 57th minute when Kevin Agudelo had only Gabriel to beat but the Brazilian stuck out his foot to save the shot in what proved the game’s turning-point.

Filippo Falco pulled one back with a curling shot on the hour, then Genoa had Agudelo sent off and Andrea Tabanelli equalised in the 70th minute. Pandev was booked for diving in the 73rd minute and then received his marching orders for a clumsy tackle shortly afterwards.

Genoa are 18th in the 20-team table with 11 points, four fewer than promoted Lecce.

? GORAN PANDEV WITH A WONDER GOAL!

? The veteran gives Genoa the lead in style pic.twitter.com/bcKjAz9V3E

? Pandev gets sent off after a second yellow card!

? The Macedonian’s incredible goal set Genoa on their way to a 2-0 lead, but they’re now down to 9-men and desperately hanging on at 2-2 against Lecce pic.twitter.com/bo9gEEAYZG