Gordon Brown has called for scores of bankers to be thrown in jail for their part in the financial crash that almost crippled the country’s economy.

Writing in his memoirs, the former prime minister declares that senior bankers from Northern Rock should be among the first to go to prison for making fraudulent claims about its finances.

And he says other guilty men – including shamed former RBS chief executive Fred Goodwin – should be forced to return their bonuses, be stripped of their generous pensions and be banned for life from becoming a company director.

Mr Brown warns that unless serious action is taken, another crisis sparked by reckless risk-taking is ‘inevitable’. ‘If bankers who act fraudulently are not put in jail with their bonuses returned, assets confiscated and banned from future practice, we will only give a green light to similar risk-laden behaviour in new forms,’ he writes.

‘We still do not have the right balance between the capital that banks need, the dividends they pay, the remuneration they give employees and the contribution they make to the public for the social costs of their risk-taking.’

The outspoken comments come from his book, My Life, Our Times. He discusses the defining story of his three-year premiership: the near-collapse of Britain’s banking system.

The former Labour leader hits out at a series of the biggest names in high street banking, saying:

Mr Brown also turns his fire on David Cameron, accusing him of being too soft on the banks after he took office in 2010. He points out that while major bankers have been prosecuted for fraud in countries such as Iceland, Spain and Ireland, nothing has happened in the UK. 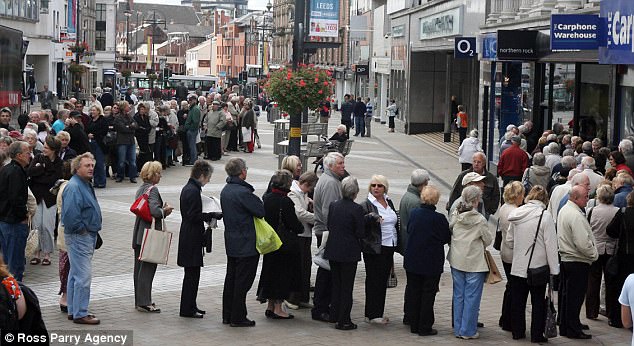 Panic: Worried Northern Rock savers queue up to withdraw their cash in 2007

The former PM accuses the banks of paying far too much in dividends. As a result, they did not have enough capital saved up – which meant they had to be bailed out by the state to the tune of £50billion. ‘Little has changed since the promise in 2009 that we bring finance to heel,’ he says. ‘The banks that were deemed “too big to fail” are now even bigger.

‘Some regulators freely confess that risks have morphed and migrated out of the formal banking system and if the next crisis came they would still not know what is owed and by whom and to whom. 2009 has proved to be the turning point at which history failed to turn.

‘Dividends and bankers’ pay today represent almost exactly the same share of banks’ revenues as before the crisis hit.’ Mr Brown points out that since 2008, the financial sector has paid out £128billion in bonuses – enough to recapitalise Britain’s banks.

A typical senior banker still earns £1.3million a year and ‘Britain has three-quarters – more than 4,000 – of Europe’s one million-euro bankers, a figure that has risen 50 per cent since the crisis’, he says.

‘Even at RBS, which has had £58billion of accumulated losses and is guaranteed by the taxpayer, the number of bank employees earning more than one million euros has barely changed – 121, down from 131.’ He calls for senior bankers to be charged under the Fraud Act 2006, which criminalises fraud by false representation, failing to disclose information and abuse of position.

Mr Brown lays into Northern Rock, which had to be nationalised by his government early in 2008. He says it was far too dependent on short-term loans – and was guilty of covering up its debts. 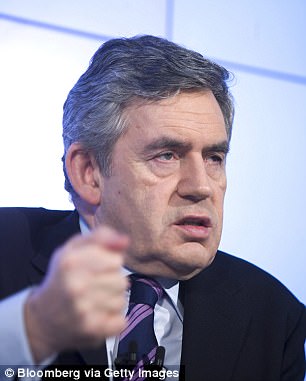 ‘No other bank relied so much on short-term borrowing – often overnight lending – from the marketplace and at the same time paying low interest rates to fund long-term mortgages, so much so that their very survival depended on it,’ he says. ‘They had no plan B if the short-term financial markets dried up. Indeed, their strategy was so aggressive that it was but a short step from criminality: when they issued figures for mortgage debts in the months before the bank’s collapse, they had failed to disclose the arrears of hundreds of mortgages.’

On RBS, Mr Brown accuses Mr Goodwin of agreeing to the catastrophic takeover bid of Dutch firm ABN Amro in 2007, which brought RBS to its knees, on the flimsiest of evidence. ‘Yet at no point did I ever hear Fred Goodwin express real contrition to me – or to anyone else – for his role in the bank’s collapse,’ he says.

Mr Brown accuses RBS and Mr Goodwin of the shameful waste of billions of pounds.

By the time the bank collapsed, Mr Goodwin ‘had from his company a private suite in the Savoy costing £700,000 a year, a fleet of 12 chauffeur-driven Mercedes limousines with RBS emblazoned all over them, and he regularly used a private jet at the weekend – whether for boar hunting in Spain or following the glamorous F1 circuit around the world’.

RBS wasted an estimated £200million a year in a sponsorship budget. Last night RBS said it would not comment.

Day I told Sarah: I don’t know if I’ll still be PM this evening

Mr Brown told his wife Sarah to prepare for a ‘sudden move’ out of Downing Street as the banking sector teetered on the brink, he reveals.

The former prime minister said he had been prepared to resign in October 2008 if his £50billion bank rescue plan had failed.

Writing in his memoirs, Mr Brown says he woke up one morning and told his wife that if the scheme had demonstratively failed by the evening, he would have to go.

Mr Brown announced the biggest nationalisation of modern times on the morning of October 8, 2008. The drastic step – a £50billion state rescue of Britain’s crumbling high street banks – came amid fears that some of the most recognisable names in banking cold have vanished in days.

In his memoirs, the former prime minister recounts how on the evening of October 7 he met the chief executives of major banks to hear the details of the bank rescue plan. 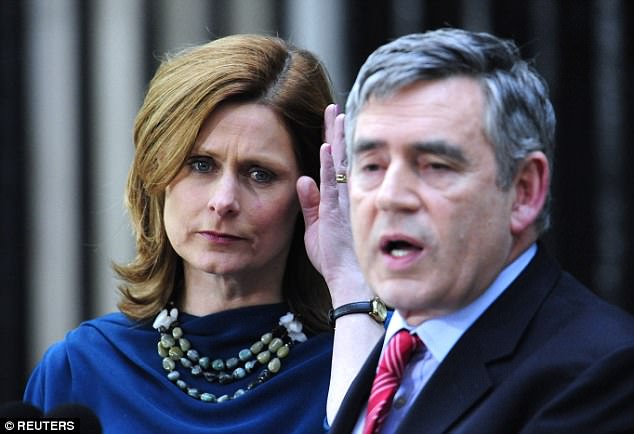 ‘I went to bed at midnight on Tuesday, 7 October, with my mobile phone next to me in case of any further disasters,’ he says.

‘I had decided to announce the plan at 7am the following day, and that we would phone other national leaders and finance ministers immediately beforehand and afterwards.

‘When I got up the next morning I told Sarah that she would have to be ready to pack our things for a sudden move out of Downing Street. If what I was about to do failed, with markets collapsing further and confidence ebbing from Britain, I would have no choice but to resign. As I walked into the office, I didn’t know if I’d still be there at the end of the day.’

RBS was the first bank to sign up, followed by HBOS and then Lloyds, which was taking over HBOS.

But Barclays remained aloof – preferring instead to borrow money from Qatar and the United Arab Emirates.

‘What Barclays executives and its board now did, to escape British government control, was unconscionable,’ Mr Brown writes.

‘They paid the sovereign funds a service fee – in Qatar’s case, £300million – that they never disclosed. Because of this they have been warned they may well be subject to a Financial Conduct Authority fine for handing over money they did not properly declare. However, the FCA probe had to be temporarily suspended to give way to a Serious Fraud Office investigation into a £3billion loan subsequently given by Barclays to Qatar.

‘I was always suspicious of the bank’s lack of openness with their shareholders – and the public – about the deal it did with the Gulf states.

‘And I was always unhappy that Barclays chose to use their deal to make a political statement: denouncing our state recapitalisation of the banks.

‘The fact that it was state money – from Qatar and UAE – that bailed them out did not discourage them from trying to score cheap political points and build a myth about the awfulness of state interventions.’