Gordon Ramsay was every inch the family man as he celebrated the opening of his latest restaurant  – The River Restaurant – with his wife and daughters on Thursday.

Gordon donned his chef’s whites for the evening, while Tana looked stunning in a glittering black dress.

The other F word: Gordon Ramsay was every inch the family man as he celebrated the opening of his latest restaurant – The River Restaurant – with his wife Tana and daughters Holly and Megan on Thursday

Holly wowed in a high necked black dress, while Megan matched in a silk shirt dress, ensuring Gordon stood out on the night.

This comes as Gordon’s daughter, Strictly Come Dancing’s Tilly has insisted she’s ‘just good friends’ with her professional partner Nikita Kuzmin after the pair sparked rumours of an off-screen romance.

The CBBC star, who wowed viewers with her Charleston on Saturday, told Hello! that her relationship with Nikita is strictly platonic as they throw themselves into training for Movie Week.

It comes after rumours swirled that Tilly and Nikita were set to be victims of the show’s famous ‘curse’ after the pro’s girlfriend Nicole Wirt penned a crypical message about ‘not being supported.’ 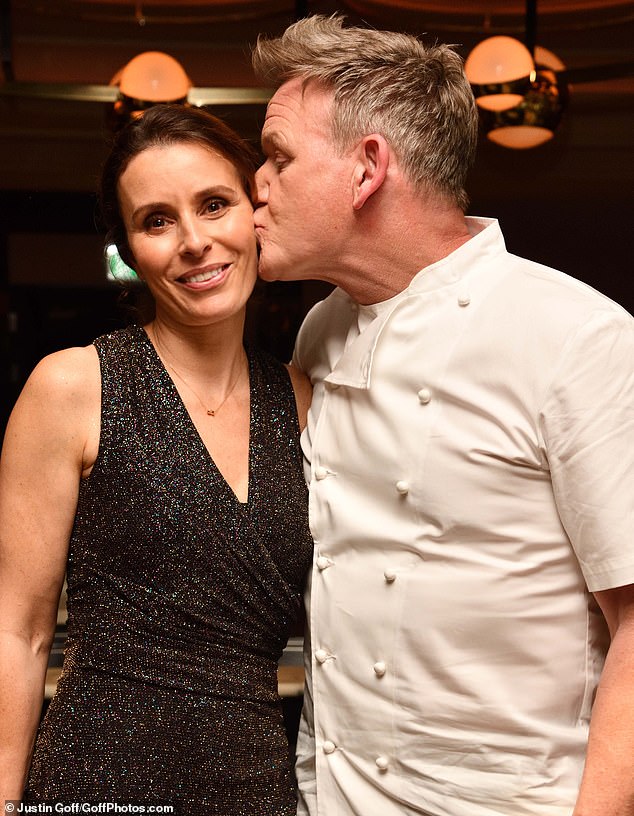 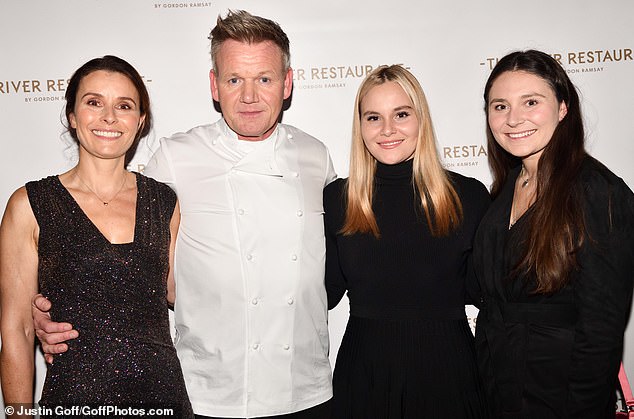 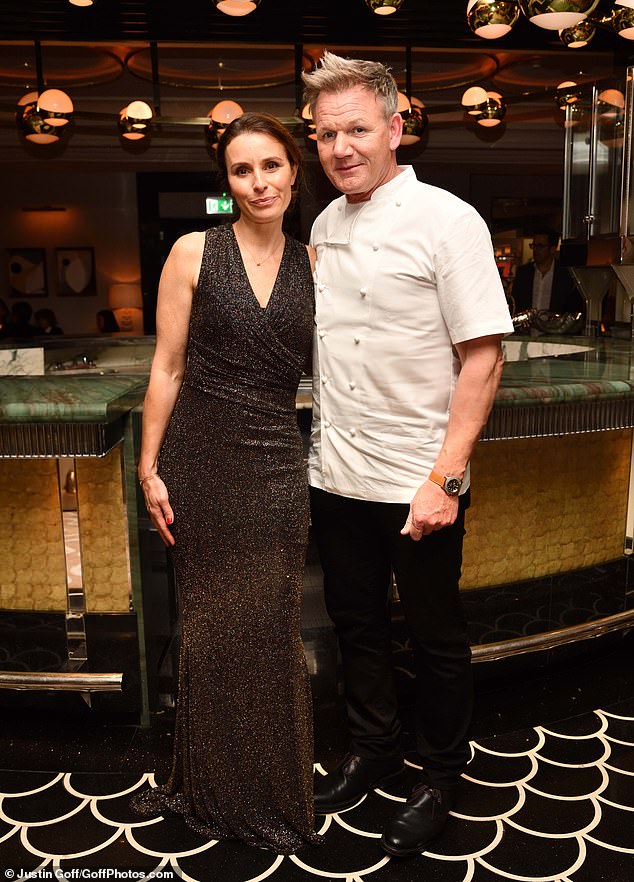 Glitz: Tana looked stunning in a glittery black dress as she posed with her husband 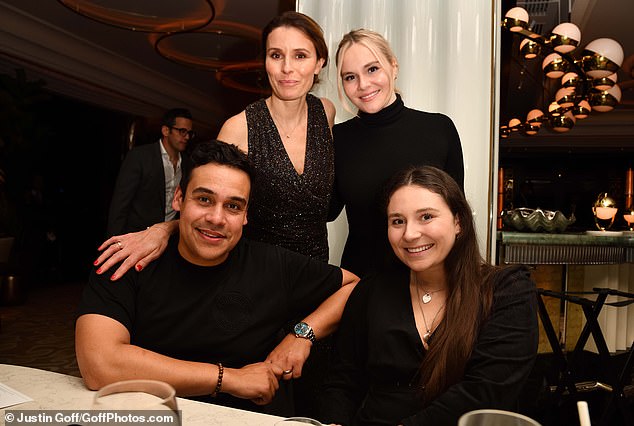 Pose: The group were joined by Paul Ainsworth for a quick snap 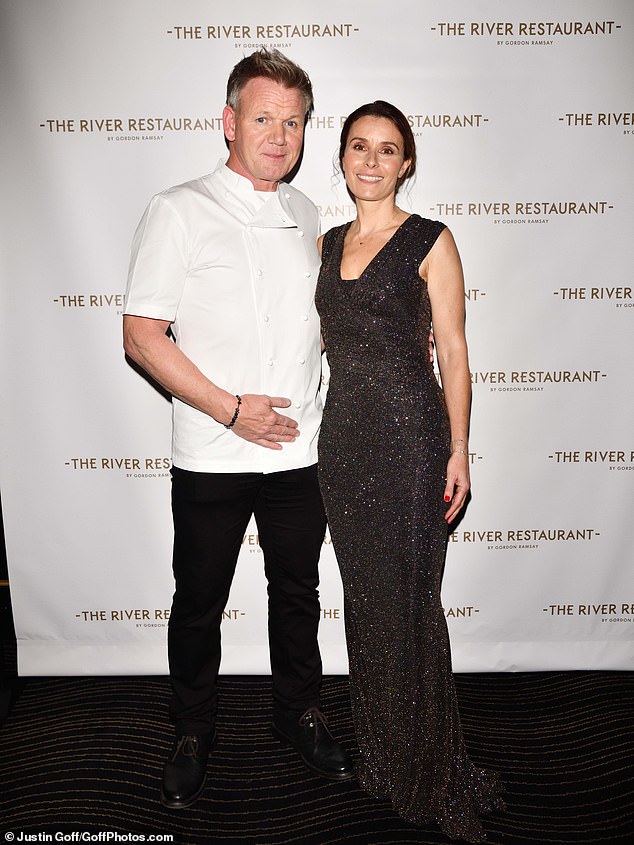 Look of love: Gordon looked delighted to have his gorgeous wife on his arm 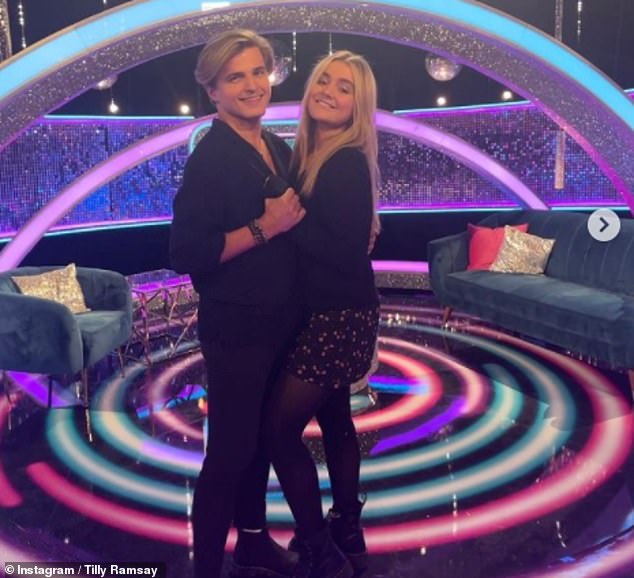 After Tilly and Nikita were seen heading back to her flat one evening, the daughter of TV chef Gordon Ramsay set the record straight, clarifying: ‘No no – we were filming a VT for the show, we really are just good friends and dance partners.’

Nikita added that his family and his girlfriend Nicole have been hugely supportive since he joined the Strictly lineup earlier this year.

He said: ‘My family and my girlfriend have been an amazing support since I started Strictly. I try to call them every day to update them on how it’s going. 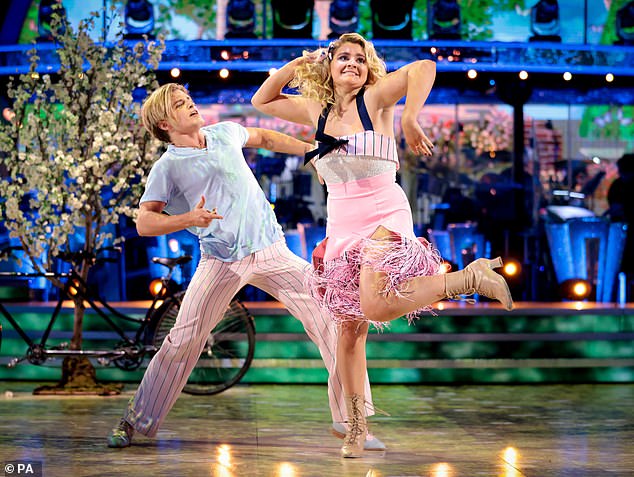 Hard at work: The star, who wowed viewers with her Charleston on Saturday (pictured)her relationship with Nikita is strictly platonic

‘We’re used to living far away from each other. I lived in Denmark for most of my youth, then I lived in a separate city in Italy to them, then in Germany for the last five years.

‘It would be a dream for them to come and watch Strictly live. My mother is a huge Strictly fan – she knows more about the show than I do!’

It comes after Tilly, who is single, insisted that she is on Strictly to focus on the dancing, which she is juggling with her university work.

Speaking to new! magazine, she said: ‘Yes, I am single but I’m here to focus on dancing.

‘I’d have been crazy to say no to Strictly Come Dancing. It really is a once-in-a-lifetime opportunity and most importantly I really want to learn to dance.’ 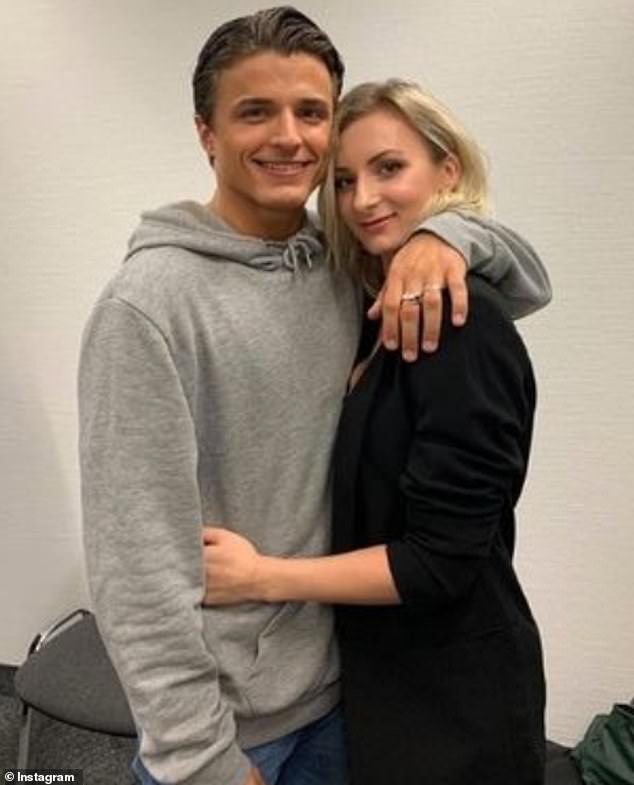 Proud: Nikita added that his family and his girlfriend Nicole Wirt (pictured) have been hugely supportive since he joined the Strictly lineup earlier this year

Nikita is in a relationship with girlfriend of five years Nicole who recently liked a post about Tilly’s training with Nikita before changing her mind and removing it, according to The Mirror.

Nicole, who is also a dancer and is currently based in Germany, was said to have taken to Instagram and shared a cryptic post of a split screen image with a single person on one side and the caption: ‘The Support’.

Alongside this was a photo of a large crowd which she captioned: ‘The congratulations’. 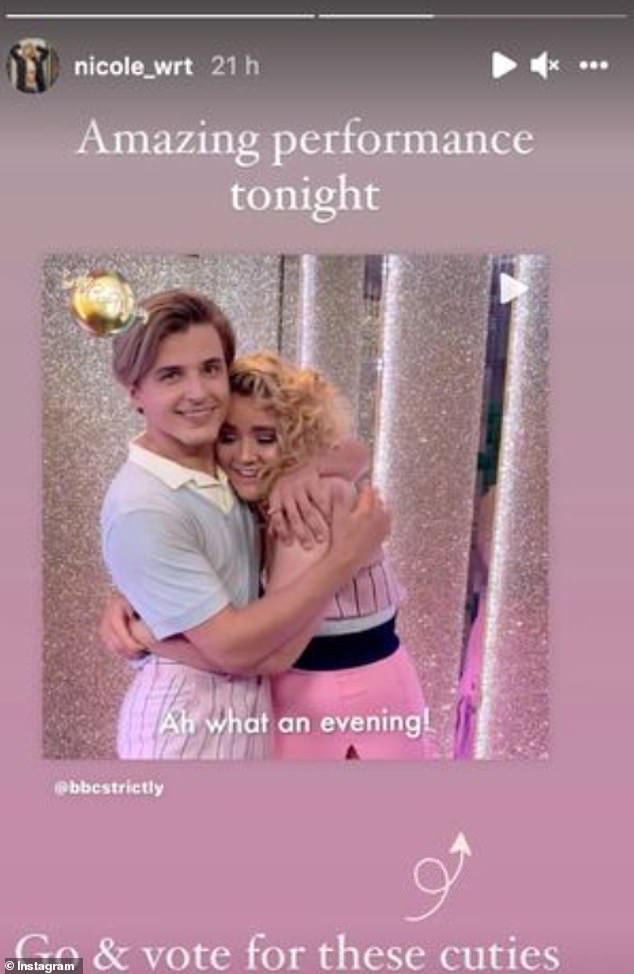 Couple: Nicole previously offered her support for girlfriend Nikita did offer her support with this post where she wrote: ‘vote for these cuties’

Nicole was then said to have written ‘Don’t be fooled’ over the photos along with an emoji of a person with their finger over their mouth.

She also shared a photo of Tilly and Nikita’s waltz from week one and wrote: ‘Cheering on my faves’ and said their performance was ‘mesmerizing’.

It comes after Craig Revel Horwood predicted Tilly might ‘fall in love’ with Nikita during their time together on the show.

He told The Mirror: ‘Nikita is hot, hot, hot. Tilly might fall in love! They look great together.

‘I would love to see Gordon Ramsay on here and having his daughter is the best, best thing. She looks keen and I can’t wait to see her personality…’ 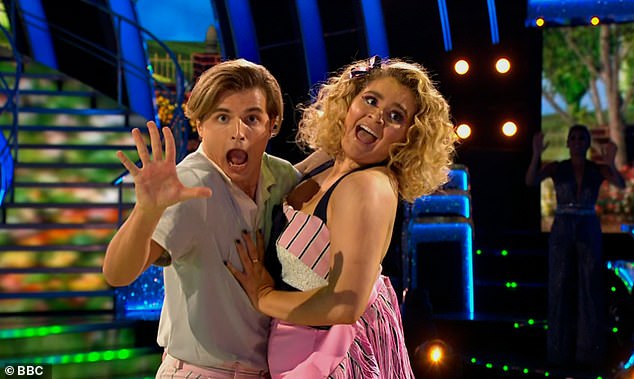 Chef Gordon revealed he gave his youngest daughter one piece of advice when she signed up for the show, notorious for its stars forming romantic relationships.

In an interview with You magazine in The Mail on Sunday, Gordon recalled: ‘I said to her, ‘Please don’t date the effing dancer.’ ‘

Last week, pictures were published of the 19-year-old presenter enjoying a cosy night with Ukrainian dancer Kuzmin who is starring in his first series of Strictly.

He was seen dashing into her flat in South-West London after a day training together in a nearby studio.

An onlooker said: ‘They looked around for each other, then Tilly linked up with the dancer and they headed inside under cover of darkness.’

Gordon was moved to tears during Saturday night’s episode of Strictly as he watched Tilly top the leaderboard alongside Sara Davies.

The notoriously hot-headed star couldn’t stop the tears from flowing as he and wife Tana proudly watched their daughter, 19, perform an impressive Charleston in the closing moments of the BBC show, bagging themselves an impressive 34 points out of 40. 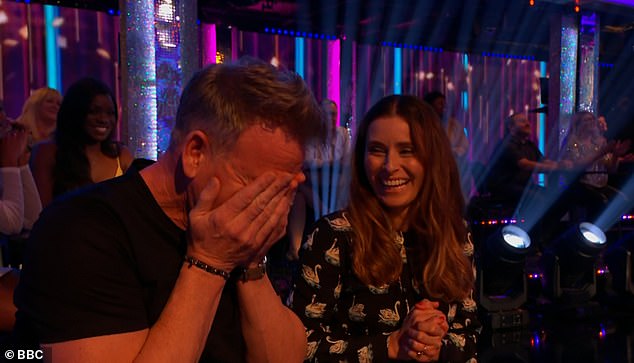 So sweet: Tilly’s proud dad Gordon was moved to tears during Saturday night’s episode of Strictly as he watched her top the leaderboard alongside Sara Davies