The desperate battle to save the life of a devoted dog lover has been revealed after her unconscious body was pulled from the water at a Sydney beauty spot.

Bev Webb, 47, died after she appeared to have a medical episode in the sea at picturesque Gordons Bay in Clovelly on Sydney’s eastern beaches on Monday.

Aleksei Prakhiy, 18, was on the beach when he and his mates spotted the Leichhardt woman lying lifeless in the water close to nearby rocks and sprinted to help.

He and his friend immediately pulled her from the sea but she was already unconscious and appeared to have stopped breathing.

Bev Webb, 47, died after she appeared to have a medical episode in the sea at picturesque Gordon’s Bay in Clovelly on Sydney’s eastern beaches on Monday. 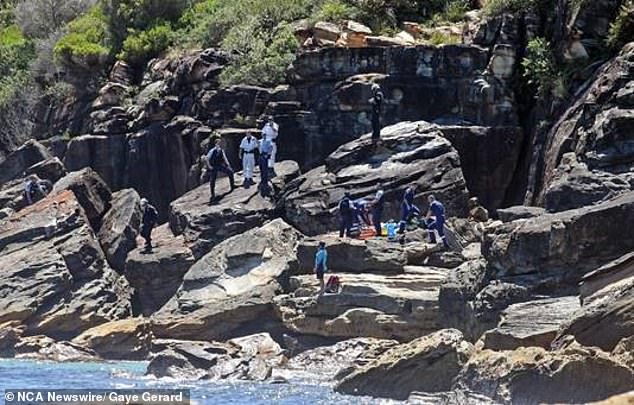 Aleksei Prakhiy, 18, was on the beach nearby when he and his mates spotted the Leichhardt woman lying lifeless in the water close to rocks and sprinted to help

‘The waves were washing over her and she was being submerged so we had to move her onto a rock,’ the teen from Mascot in Sydney’s east told Daily Mail Australia.

‘There were three teenage girls there too, but one guy checked her pulse and tried to see if she was breathing, but there was no sign of life.

‘She wasn’t responsive at all so we started shouting for people to call the emergency services.’

Aleksei learned basic CPR at school and put it into action, recalling instructions to use the rhythm of the Bee Gees song Staying Alive to try to keep her heart beating.

‘When we saw she wasn’t breathing, we realised we needed to do CPR so I just started doing chest compressions,’ he said.

‘I was doing it for five minutes or so – I did about three or four rounds of it. I was trying to remember the song in my head to keep the beat.

‘It felt surreal at the time. I remembered it and I was doing it – but it just didn’t work.’ 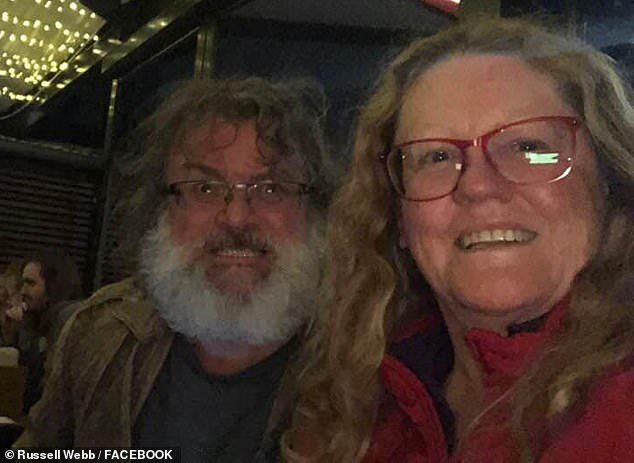 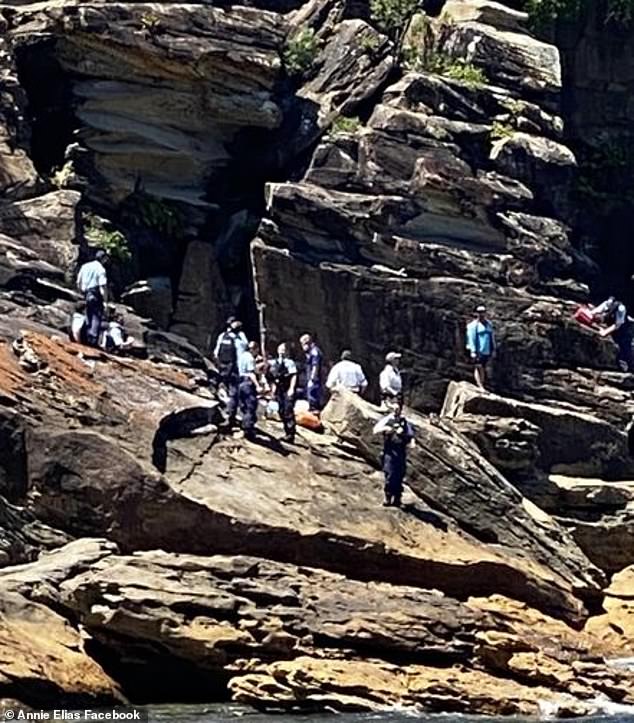 The 47-year-old woman was face down in the water when she was found at Gordons Bay, next to Clovelly Beach in Sydney’s east

Aleksei was still doing the chest compressions when help arrived, with police and paramedics picking their way through treacherous boulders to reach the scene.

The 1.95m teen then helped lift Ms Webb’s body from the water’s edge up several metres to a flatter area on top of one of the giant boulders so medics could treat her.

A surfer with first aid training also arrived to help while police on a jetski transferred vital medical equipment from a police boat from nearby Coogee.

Ms Webb – married to husband Russ and an avid fan of whale watching – is believed to have been snorkelling at the beach with relatives when the tragedy unfolded.

The relatives joined the rescue mission but were unable to help save the woman’s life. 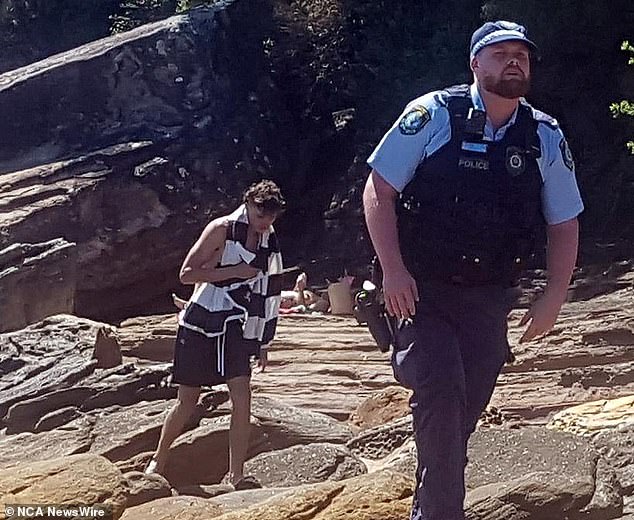 The 1.95m teen then helped lift Ms Webb’s body from the water’s edge up several metres to a flatter area on top of one of the giant boulders so medics could treat her 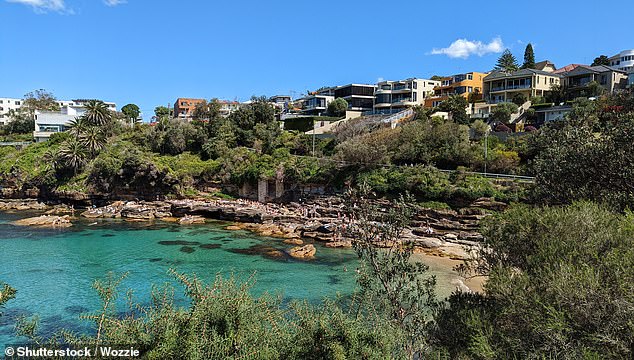 Gordons Bay is a picturesque hideaway popular with divers and snorkellers

‘It was shocking,’ admitted Aleksei. ‘It’s the first time I’ve encountered a dead body and it’s a lot to process.

‘At the time it was more of an adrenaline rush when I saw her unconscious and my first instinct was to run and help.

‘When help arrived I was just relieved to be able to hand over to people who knew exactly what to do.’

Friends paid tribute online to Ms Webb – believed to be an area supervisor with Census Australia = as word spread of the tragedy.

Pet rescue group Paws for Thought broke the news to followers ‘with a heavy heart’ and called her a ‘beautiful kind lady’.

‘We have known Bev for over five years,’ they posted online. ‘We see and chat to Bev every Saturday and every Sunday at our doggie cafe.

‘There is such profound sadness and shock felt by all of us at Cafe Bones. 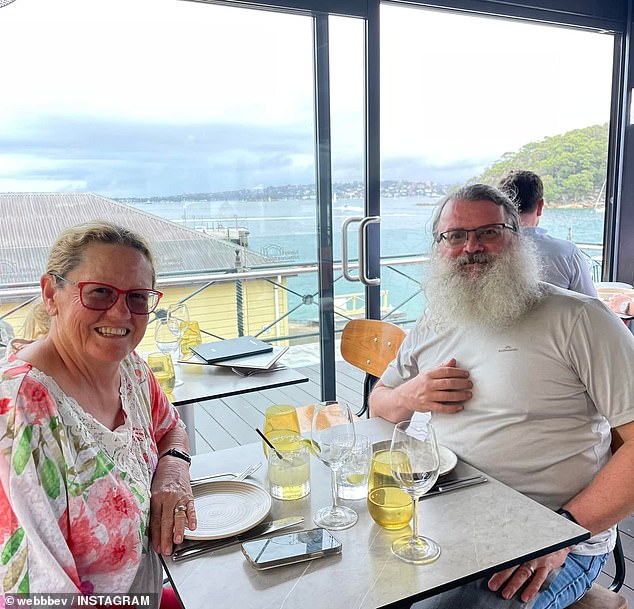 ‘We can’t believe that one of the nicest people you’d ever meet will no longer be the smiley, happy and jolly person we see every week on our weekend outings.

‘The doggie cafe can never be the same without our Bev.’

Shane Manuse, owner of the Leichhardt-based cafe, told Daily Mail Australia they are planning to hold a memorial for her in the days to come.

‘She was just a lovely lady who would always adopt the older dogs that other people would ignore and give them a happier life in their twilight years,’ he said. 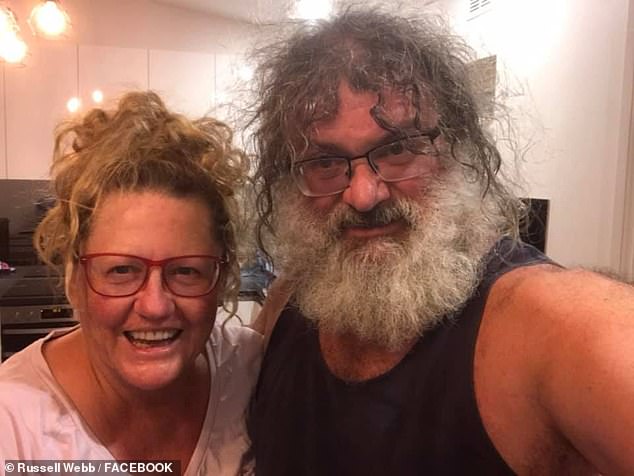 ‘She was always out walking her dogs, come rain, hail or shine and made sure everyone else’s dogs were all part of the pack.

‘She was just a very loving lady.’

He added: ‘It’s going to be a huge blow for her husband Russ. He was always down here with her and they were always very close.