Sajid Javid’s Department of Health and Social Care (DHSC) was today slammed for staying silent over whether thousands of carers who were sacked for not getting a Covid vaccine can get their jobs back.

The House of Secondary Legislation Scrutiny Committee has said there are still ‘a lot of loose ends that must be addressed’.

Up to 40,000 workers were effectively fired when the highly controversial ‘no jab, no job’ policy was introduced in November.

Health chiefs then U-turned on the legislation, which was also going to be placed on NHS workers from April 1.

Hospital staff weren’t affected by the mandate because it had yet to come into force, but care homes had already been forced to get rid of any unjabbed carers.

Industry bosses warned it was too late because many wouldn’t bother coming back to the hugely understaffed sector, which was already short of 100,000 carers before Covid struck.

The Department of Health has once again been criticised for its continuing silence on if the 40,000 care home staff sacked over the ‘no jab, no job’ policy brought in in November 2021 but not revoked should be reinstated (file image) 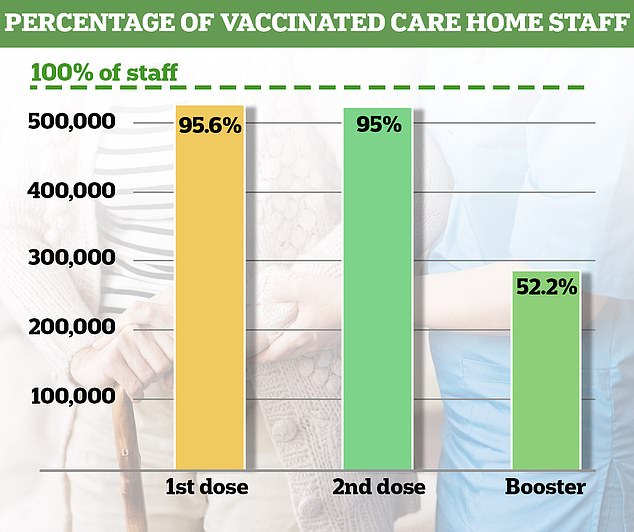 This chart shows the percentage of care home staff employed in England who have had each of the Covid vaccines as of March 17, the latest available data 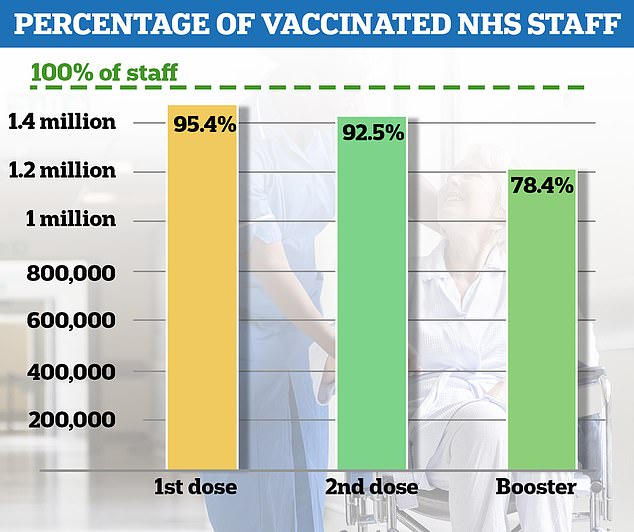 And this chart shows the percentage of NHS health staff who have had each of the Covid jabs as of March 17, the latest available data

Get ready for FIFTH jabs this autumn: Sajid Javid says over-50s will ‘probably’ need another Covid booster later this year

Fifth Covid jabs could be rolled out this autumn, the Health Secretary has suggested in the strongest hint yet that the vaccination programme will be expanded again.

Grilled this morning about whether another booster campaign was in the works, Sajid Javid claimed it was ‘possible… probably for those that are 50 and over’. But he added a ‘final’ decision was yet to be made.

Over-75s, care home residents and patients with weak immune systems will begin receiving invitations for a spring Covid top-up from today, in order to bolster the immunity levels of millions.

If they are offered another jab in the autumn, it will be their fifth. Some immunocompromised adults will have already had five by then.

Mr Javid also revealed No10’s ‘level of concern has not changed’ over the past two weeks, despite the rise in infections and hospitalisations. He said the numbers ‘are still way below their peak’.

He also urged people to treat Covid like any other infectious disease, and ‘behave sensibly’ if they were feeling unwell or experiencing symptoms — including socialising less and staying indoors to avoid spreading the virus. He gave the advice ahead of England ending its free testing offer from next Friday.

Five million Britons became eligible for second boosters today, with the first 600,000 expected to be invited this week.

The move comes after the Joint Committee on Vaccination and Immunisation (JCVI) recommended the spring top-up as a precautionary measure.

Baroness Bakewell of Hardington Mandeville, one of the committee’s members, praised the DHSC for the information and scientific evidence behind the decision to revoke the jab mandate policies.

But she said: ‘There are issues that still give cause for concern.’

In an memorandum provided to the committee, the DHSC said it is ‘engaging with the NHS’ to review recruitment policy to consider ‘vaccination status’ when hiring new staff.

Baroness Bakewall said that any such move ‘needs proper evaluation in light of the pandemic experience’.

And she said it was ‘disappointing’ that the DHSC remained silent on whether sacked staff can or should be reinstated.

The DHSC said that the matter of rehiring staff was to be decided by ‘each individual employer’.

Baroness Bakewall added: ‘This change still leaves a lot of loose ends that must be addressed.’

In a statement, the Lords expressed their ‘surprise and disappointment’ over the DHSC’s failure to provide estimates on how many staff were dismissed due to the policy, or who left employment in anticipation of the NHS mandate.

No10’s ‘no jab no job’ policy for care home staff was imposed in November, just as the UK was bracing for the impact of the Omicron variant.

A similar policy was going to be imposed on NHS staff in April this year but Mr Javid performed a U-turn after warnings that sacking the estimated 80,000 unjabbed NHS could lead to crippling staff shortages.

Both compulsory jab polices were officially revoked on March 15.

It followed a public consultation, where 90 per cent of the responses supported the removal of the requirement for care staff.

At the time, Mr Javid defended the vaccine mandate by saying it was the ‘right policy when the original decision was taken’.

But he added that the situation had changed following ‘clinical evidence regarding the current Omicron variant of Covid, which is intrinsically less severe than Delta, and the high rate of vaccination across the population’.

Fears that the highly infectious variant could cripple the health service and send the UK back into the darkest days of the pandemic proved false.

Omicron, while much more virulent than other Covid variants, is more mild in terms — and jabs still worked against it.

The Lords Committee’s criticism over the Department silence over if staff sacked over the ditched health mandate should now be reinstated comes after figures in the care industry have demanded an apology.

Some care home staff said they resented being treated as ‘guinea pigs’ for the move, with some managers claiming they had to sack a sixth of their workforce due to the mandate.

Unions have also demanded an apology from the Government to social care staff for what they have been put through, labelling it as ‘they least they could do’.

As of March 17, the latest available data, 52.2 per cent of almost 550,000 care home staff in England had received a Covid booster jab.

The uptake rate is higher for NHS staff, with 1.2million having had at least three doses of Covid vaccines out of the 1.5million workforce, about 78 per cent. 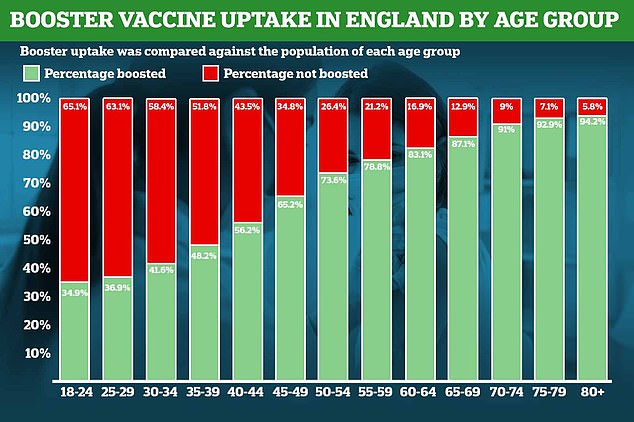 About 67 per cent of the eligible British population has had a Covid booster, about 38.6million people.

A DHSC spokesperson told MailOnline that employers must decide if they wish to reinstate staff dismissed over the old policy.

‘The matter of re-hiring staff who have been dismissed or resigned because of regulations is an issue for each individual employer and they may want to seek independent legal advice,’ they said.

The spokesperson added that Covid jabs remain the best defence against the virus and employers of health and care staff should continue to encourage them to get the vaccines.