By Claire Ellicott and Jack Doyle for the Daily Mail

Michael Gove will take the first steps towards banning imports from trophy hunting, he tells the Mail today.

The Environment Secretary will issue a call for evidence to decide whether to outlaw hunters bringing the souvenirs into the country.

He will also consult on what the UK can do to end its role in the rearing of animals in fenced reserves where they are shot by trophy hunters.

Trophy hunting is the shooting of certain animals – usually big game such as rhinos, elephants, lions, pumas and bears – for pleasure.

Outrage: American television host and hunter Larysa Switlyk (far right) posted this picture after shooting an alligator. The Environment Secretary will issue a call for evidence to decide whether to outlaw hunters bringing the souvenirs into the country

The trophy is any part of the animal – its head, skin or any other body part – that the hunter keeps as a souvenir.

Mr Gove said there was an important debate about whether trophy hunting in poorer countries could be used to enhance their economies.

But he added that it was important to explore whether these countries would not benefit more from wildlife tourism.

He also criticised the practice of ‘lion canning’ which involves thousands of lions in South Africa being bred and kept in fenced areas to be shot by wealthy travellers.

He said: ‘I find it hard to see how those justifications can be used to defend those who ‘hunt’ animals, who have been bred in captivity for the specific purpose of dying for others’ entertainment.’

Trophy hunting is rife in certain parts of the world, with 1.7 million trophies legally traded between 2004 and 2014. About 200,000 were from threatened species.

Of those, 2,500 were brought home by British hunters, including hundreds of heads, feet, tails, hides, tusks and horns from some of the most endangered species, including rhinos and elephants.

Lions were hit with the biggest increase in trophy hunting among the big five – despite their numbers decreasing by 43 per cent between 1993 and 2014. 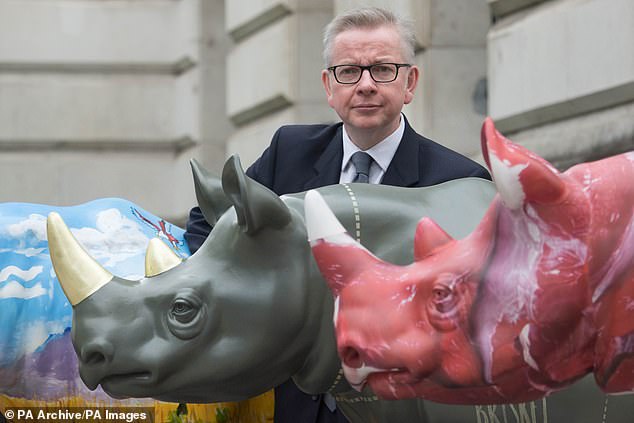 Quite often, hunters cause outrage by showing off their prizes in pictures on social media.

And not all have to travel to far-flung plains to satisfy their blood lust.

Last year, a self-styled ‘Hardcore Huntress’ proudly posted pictures of herself beside the carcasses of sheep and goats she had shot on a trip to Scotland.

American television host Larysa Switlyk had been on a two-week hunting trip to Islay, a remote Scottish island, when she tweeted the images.

The 33-year-old labelled one picture of a dead goat ‘such fun’, prompting a furious online backlash.

Mr Gove has already banned ivory to prevent its trade in the UK and protect threatened species.