The US government has been secretly collecting documents on ‘remote mind control’ and ‘forced memory blanking’, accidentally leaked files suggest.

A reporter claims to have been mysteriously sent the proof after filing a request for a different set of information.

In what sounds like a plot from the X-files, they revealed research into bizarre ‘psycho-electronic’ weaponry.

These claim to use electromagnetic forces to achieve their aims, including inducing intense pain, itching or even rigor mortis.

MailOnline has contacted the parties parties involved to verify the claims, but has yet to receive a response.

The US government has been secretly collecting documents on ‘remote mind control’ and ‘forced memory blanking’, accidentally leaked files suggest. In what sounds like a plot from the X-files, they revealed research into bizarre ‘psycho-electronic’ weaponry

The documents in question were sent to Curtis Waltman, a journalist working for Boston nonprofit MuckRock which is dedicated to helping people make Freedom of Information Act requests to government bodies.

He was investigating far-left activists Antifa and the white supremacist groups it opposes when he claims to have made the bizarre discovery.

They were included in material provided by Washington State Fusion Center, a Department of Homeland Security affiliate that provides information sharing and analysis. 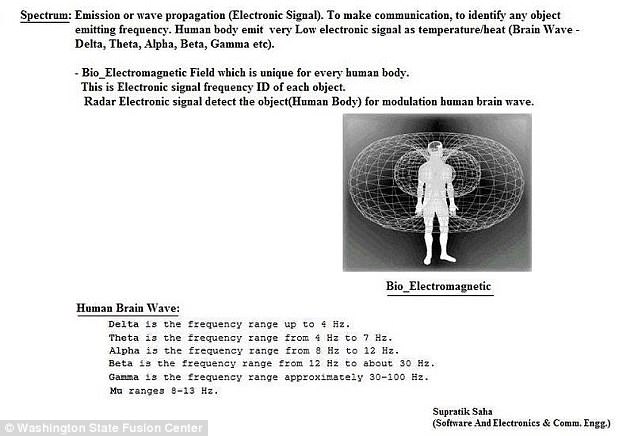 A reporter was investigating far-left activists Antifa and white supremacist groups when he claims to have made the bizarre discovery. Such weapons claim to use electromagnetic forces (illustrated) to achieve their aims, including inducing intense pain, itching or even rigor mortis

Among the expected records, including emails, intelligence briefings and bulletins , was a compressed file labelled ‘EM effects on human body’, Mr Waltman says.

Writing in his article on the subject, he said: ‘It’s entirely unclear how this ended up in this release.

‘It could have been meant for another release, it could have been gathered for an upcoming WSFC report, or it could even be from the personal files of an intelligence officer that somehow got mixed up in the release.’

The files detail a number of proposed devices and techniques that aim to manipulate the human mind.

WHAT ARE PSYCHO-ELECTRONIC WEAPONS AND HOW MIGHT THEY WORK?

Rumours of governments experimenting with pyscho-electronic weapons have long abounded among conspiracy theorists.

Also known as pscyhotronic or mind-control weapons, it is claimed they use electromagnetic forces to achieve a variety of results.

This includes mind-reading and mind control, as well as torture and harassment.

The basis for these claims does have some origin in fact.

In 1953, the then director of Central Intelligence officially approved project MKUltra.

It was intended to help the US government keep up with experiments they believed the Soviets were conducting during the Cold War.

They hoped to achieve this aim through ‘the use of biological and chemical materials in altering human behavior,’ CIA director Stansfield Turner testified in 1977.

Footage has since emerged of experiments conducted into the potential of weaponising LSD as a method of controlling or subduing enemy forces.

Since that time, conspiracy theorists have expanded their claims about the kinds of techniques agencies like the CIA or others may have experimented with.

Some individuals say they have been targeted with pscyhotronic weapons, leading to a variety of unpleasant side effects.

That includes transmitting thoughts and sounds into people’s minds, although most medical professionals agree this is likely the result of psychiatric disorders.

They range from the implausible, like a strange technique for ‘microwave hearing’, to the potentially possible – including ‘remote brain mapping’ which would let third parties monitor your thoughts.

It’s unclear exactly where some of the images in the release come from, he says, but at some appear to have been part of an article in Nexus magazine, an Australian publication that covers ‘alternative news’ and conspiracy theories.

It reported on a legal case brought by John St Clair Akewi against the NSA, in which it was claimed that the security agency had the ‘ability to assassinate US citizens covertly or run covert psychological control operations to cause subjects to be diagnosed with ill mental health.’

Another comes from a person named Supratik Saha, who documents say is a software engineer. 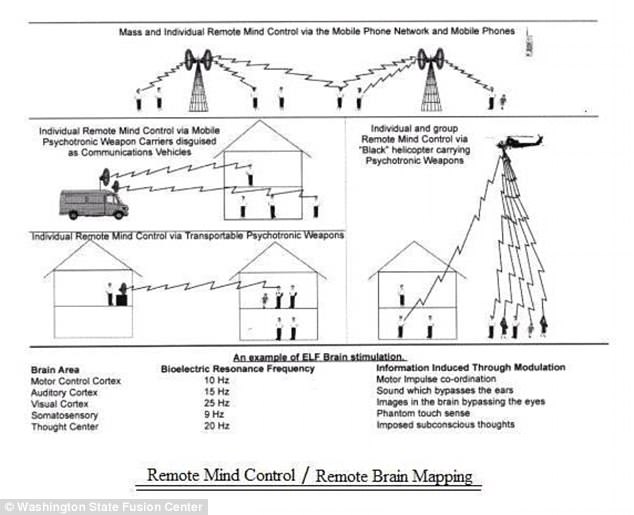 The files detail a number of proposed devices and techniques that aim to manipulate the human mind. They range from the implausible, like a strange technique for ‘microwave hearing’, to the potentially possible – including ‘remote brain mapping’ (illustrated)

The presence of these records doesn’t mean that the US government is directly working on such projects or that they are anything more than thought experiments.

However, it does seem to suggest someone was taking them seriously enough to gather the information in the first place.

‘Most of them involved the use of drugs like LSD for interrogation purposes or for the purpose of mind control. Millions of dollars poured into the project with few practical results.

‘They have been public for several years and I think there are related to what such weapons MIGHT do rather than existing weapons that can cause such effects.

They certainly add to the paranoia of conspiracy theorists who believe these and HAARP weapons are used to create UFO sightings and make people believe they have been abducted.’