A new Australian-style points-based immigration system can cut inflows to the UK and reduce pressure on the NHS and schools, according to a crucial report today.

The Migration Advisory Committee (MAC) said post-Brexit arrangements to replace EU freedom of movement could slow the growth in the UK population and make individuals slightly better off.

It recommended the rules should only be applied to skilled workers coming to the UK without a job offer after Brexit – suggesting a pool of ‘talented individuals’ could be created to allow the country to pick the best candidates.

The long-awaited report also calls for the proposed £30,000 minimum salary threshold for migrants with firm job offers to be cut to £25,400 to boost the NHS and teacher numbers.

Boris Johnson has pledged to introduce a points-based system modelled on that used in Australia, where applicants are given a personal score based on their skills and age. The blueprint should come into force once the Brexit transition period ends in December, at which points EU citizens will be subject to the same restrictions as the rest of the world.

Boris Johnson (pictured in London yesterday) wants to introduce a points-based system modelled on that used in Australia, where applicants are given a personal score based on their skills and age 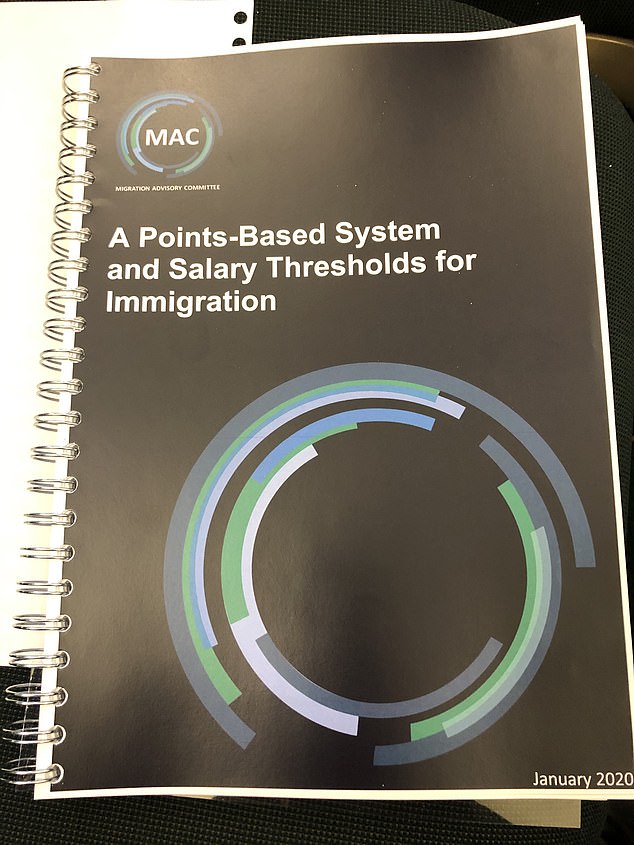 The report, A Points-Based System and Salary Thresholds for Immigration, suggest creating a talent pool of highly skilled workers interested in coming to the UK

It urged the government to make a final decision soon to allow firms time to prepare to implement the new system in January next year.

MAC chairman Professor Alan Manning said: ‘Our recommendations are likely to reduce further growth of the UK population and economy compared to freedom of movement, by using skill and salary thresholds.

How does the Australian immigration system work?

The Australian immigration system has been designed to allow people into the country who the government believes will contribute to the economy and fill skills shortages.

Skilled worker visas are available to people if they score enough points across a number of categories in a points-based assessment with 60 the magic number.

One of the key categories is age, with all applicants having to be under 50.

Younger applicants are automatically awarded 30 points while those approaching the age of 50 get zero, making it much harder for them to be accepted.

Another key category is the ability to read and write English to a satisfactory level. Points are awarded to people who are particularly ‘proficient’ while even more are awarded to those deemed ‘superior’.

Then there are qualifications and skilled employment history. This is where people must get most of their points from.

For example, five years of skilled work outside Australia is worth 10 points and a PHD qualification receives 20 points.

The Migration Watch think-tank has warned there is little evidence the Australian-style scheme would address public concern over immigration levels.

It said: ‘This statement just ducks all the key issues. There is no mention whatsoever of reducing net migration, let alone how it might be achieved.

‘The UK has had a points-based system for almost ten years and it hasn’t worked.’

‘No perfect system exists and there are unavoidable, difficult trade-offs.

‘The largest impacts will be in low wage sectors and the Government needs to be clear about its plans for lower-skilled migration.

‘The Government should ensure that the mistakes of previous UK points-based systems are not repeated.’

‘They prevent undercutting in the labour market, ensuring employers are not hiring migrants simply because they are cheaper,’ he said.

The news comes after the Prime Minister announced that top scientists, researchers and mathematicians will be given fast-tracked entry to the UK from next month.

Meanwhile, most Britons think nurses, doctors and dentists should score highly under a points-based immigration system to get a UK visa, according to a poll carried out for think tank British Future.

Some 2,305 British adults including 427 people from Scotland, were quizzed between January 10 and 13 on their thoughts about the post-Brexit immigration system plans.

The report suggests that its recommendations would hit London the hardest, because of its higher immigrant population. But it rejects varied regional salary thresholds because it would be ‘too complex’ and risked labelling some areas ‘low wage’ and adding to current problems.

However, it suggests special consideration could be given to Northern Ireland because of its land border with the EU.

Teachers and skilled NHS workers ‘would continue to benefit from lower salary thresholds’.

But a higher threshold should be kept for higher paid occupations, the report also recommends.

The report, A Points-Based System and Salary Thresholds for Immigration, suggest creating a talent pool of highly skilled workers interested in coming to the UK.

They come under the Tier One level for ‘exceptional talent’.

It recommend a ‘monthly draw’ from the pool, with those selected invited to make a full application to come to Britain.

Among the criteria for points would be age, the level and quality of qualifications, whether they are seeking work in a priority area like science, technology, engineering and maths (Stem), and whether they have previously studied in the UK.

The Tier Two visa scheme for people with job offers should remain largely the same.

On lowering the salary threshold, the report says the £25,400 level ‘strikes a reasonable balance’ but admits ‘there are trade-offs’.

‘For example, a government very concerned about the impact of the new immigration system on low-wage sectors might want to use a salary threshold lower than the general threshold.

For some public sector occupations in the NHS and schools, we recommend using national pay scales as the relevant salary threshold.’