Ministers have broken their own cap on foreign aid spending by a billion pounds because so much cash is being ploughed into helping asylum seekers in the UK, it emerged today.

Foreign aid spending is currently capped at 0.5 per cent of GDP – some £11bn – having been reduced from 0.7 per cent by Rishi Sunak when he was chancellor.

But money being spent housing Channel migrants, plus refugees from Ukraine and Afghanistan, means that the spending will be 5.5 per cent of GDP this year, the BBC reported.

The Foreign, Commonwealth and Development Office (FCDO), which controls the foreign aid budget, has been forced to accept the extra cost incurred by the Home Office.

Last month it was revealed the UK is now spending more of its international development budget at home than in poor developing countries because of the cost of housing refugees.

It came as Rishi Sunak today refused to guarantee that Channel migrant numbers will come down despite the UK handing over £63million a year under a new deal.

The PM dodged any firm promises as he hailed ‘progress’ with Home Secretary Suella Braverman sealing a pact that will see a 40 per cent boost in the number of officers patrolling beaches.

Money being spend housing Channel migrants, plus refugees from Ukraine and Afghanistan, means that the spending will be 5.5 per cent of GDP this year, the BBC reported. 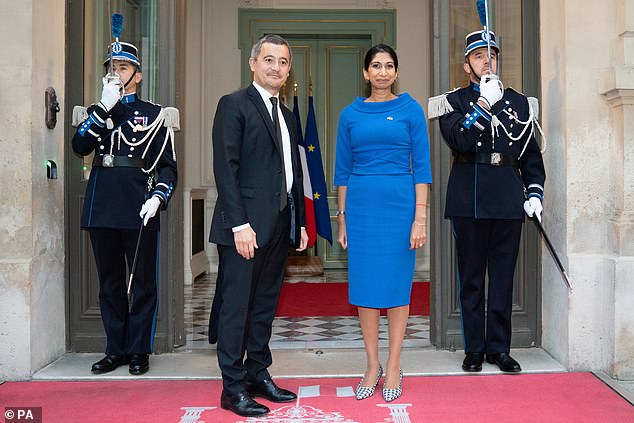 The PM dodged any firm promises as he hailed ‘progress’ with Home Secretary Suella Braverman sealing a pact that will see a 40 per cent boost in the number of officers patrolling beaches.

British staff will also be embedded in French control rooms for the first time after the number of people making the perilous journey to the UK so far this year topped 40,000.

Further measures signed off in Paris include an investment in CCTV and dog detection teams to keep tabs on ports and plans to equip officers with drones and night vision capabilities.

Meanwhile, Britain and France have agreed to step up co-operation on the issue with European partners, with a meeting of the ‘Calais Group’ of neighbouring countries to be scheduled as soon as possible.

However, despite the extra cash there will not be joint patrols between French and UK officers after Paris apparently vetoed the idea. And no targets are being set for reducing the flows across the border.

Campaigners and border experts said the agreement does not address the real ‘sticking points’ and the French authorities will keep ‘just letting them go to try again’. Labour accused the government of throwing ‘red meat’ to people alarmed about immigration and said it was ‘too little too late’.

The UK aid budget is around £11 billion, with some £4 billion going to multilateral institutions including the World Bank.

Of the remaining £7 billion, which is administered by the UK directly, more than half will be spent domestically this year, including some £3 billion on housing refugees, according to CGD’s analysis.

While the UK is allowed to count refugee-hosting costs as official development assistance (ODA) under internationally agreed rules, it is one of only a few countries – and the only one in the G7 – to fund all the costs of Ukrainian refugees from its existing aid budget, the The Centre for Global Development (CGD) think tank said.

In a statement the Treasury said: ‘Across government, there are significant pressures on the ODA budget due to the costs of accepting refugees from Afghanistan and Ukraine as well as wider migration challenges.

‘We remain one of the largest global aid donors, spending more than £11bn in aid in 2021, and UK aid has recently gone towards those in need in the Horn of Africa and Pakistan.’

One of the key Tory MPs who rebelled against Mr Sunak’s aid budget cuts last year, Andrew Mitchell, was last month appointed by the Prime Minister as development minister in the Foreign Office.

The appointment was seen as significant as Mr Mitchell, a former international development secretary, could increase pressure on Mr Sunak to honour his pledge to return to 0.7 per cent international aid spending by 2024-25.

However, the Prime Minister is considering freezing the budget for an extra two years – saving £4 billion a year – as he eyes ways to plug a multi-billion pound fiscal black hole in Jeremy Hunt’s Autumn Statement.

The British government said today it would contribute £1billion to the Global Fund to fight AIDS, tuberculosis and malaria, more than six weeks after other countries made their commitments.

The total, which covers 2023-25, is 30 per cent less than Britain pledged during the previous funding round in 2019, and below the £1.8billion requested.

Historically, the country has been a major donor to the fund. Its absence had generated surprise in global health circles when other leaders committed $14.25 billion on the sidelines of the United Nations General Assembly in September.

Other G7 countries increased their donations given the unprecedented need after the pandemic disrupted efforts to tackle other urgent health needs.

‘This fund gives hope and opportunity to millions who would otherwise suffer,’ Andrew Mitchell, Britain’s minister for development, said.

The Global Fund welcomed the funding, but advocacy organisations said it was not enough.

‘For decades the UK has been a leader in the global response to these infectious diseases, but no more,’ Mike Podmore, director of STOPAIDS, said in a statement.