Government departments have spent more than £6.5billion of taxpayers money on emergency contracts for outside help – many to private firms – during the coronavirus pandemic.

More than 1,200 deals have been done, often without tendering, as ministers scrambled to adapt to the lightning-fast spread of the virus and the economic collapse that followed because of the lockdown.

They cover a vast swathe of sectors and requirements for everything from emergency Nightingale hospitals and ventilators to free school vouchers and food delivery boxes for those shielding.

The analysis shows 1,262 contracts have been handed out to date, worth a total of £6.61billion. Some £2.6billion of contracts were handed out in June alone.

The Department of Health, as the lead department in the crisis, has so far spent £3.6billion on 334 contracts.

The overall largest contract was handed out by the Office For National Statistics (ONS), which is paying £750million on its Covid -19 Infection Survey (CIS), which provides data on how the pandemic is affecting the country.

It comes amid criticism over how many of the contracts, some worth hundreds of millions of pounds, were awarded.

The list of firms which have made the most money so far is dominated by PPE manufacturers and services companies.

They alone account for £1.77billion of the total spending to date.

The largest contract handed out to a single private company was the £252million awarded to finance firm Ayanda Capital to source and supply PPE.

Last week it was revealed that because the masks had ear straps rather than head straps, the Department of Health was not using them, citing ‘concern’ they may not provide an ‘adequate fixing’ around the face.

It prompted questions about the contract handed to Ayanda, which had no previous experience in sourcing PPE.

But the firm’s boss Tim Horlick said that 50 million Chinese-made FFP2 masks it supplied were ‘perfectly good’ and accused civil servants of an unwarranted attack on the business.

Edenred was given the golden ticket to handle the free school meal voucher scheme.

Initially supposed to be limited to the Easter break, it was extended to cover the summer holiday for thousands of disadvantaged children after the intervention of England Manchester United Star Marcus Rashford.

Edenred, founded by Bertrand Dumazy, was criticised in April for allowing thousands of British children to go hungry because it could not supply enough food vouchers.

Parents were unable to claim the coupons they need to buy groceries during the coronavirus lockdown because it couldn’t deal with a deluge of inquiries.

The French firm, which made more than £270 million profit last year, was inundated with calls from schools seeking assistance, with some teachers racking up substantial bills in the process.

In an email sent to schools the company said ‘higher than anticipated’ orders had an ‘impact on the performance and experience’.

Edenred said its team had been working ‘day and night’ through the Easter weekend to process orders and develop system capability.

‘If we can balance the load on the system, we can provide a consistent and constant flow of essential support through to families,’ the email, sent on behalf of the DfE, read.

The Essex based logistics firm has been working on PPE supply since April. Founded by Iain Liddell, it has five contracts with the Department of Health worth £186.4million.

It was one of the many, many private firms drafted in to help supply gowns, masks, visers and gloves to NHS hospitals up and down the country.

On its website it says: ‘Uniserve are moving goods by all modes of transport to deliver ventilators, goggles, surgical masks, gloves, gowns, as well as millions of litres of hand sanitiser urgently to where they are most desperately needed.

‘Driven by a sense of responsibility and professionalism, our global teams are working 24 hours a day, seven days a week. We are putting all our expertise, resources and facilities at the Governments disposal to make sure they get as much of the PPE to the frontline doctors and nurses so that our NHS and this country can beat the virus.’

The British arm of a Germany-based multi-national manufacturer of ventilators and PPE, with a head office in Blyth, Northumberland. 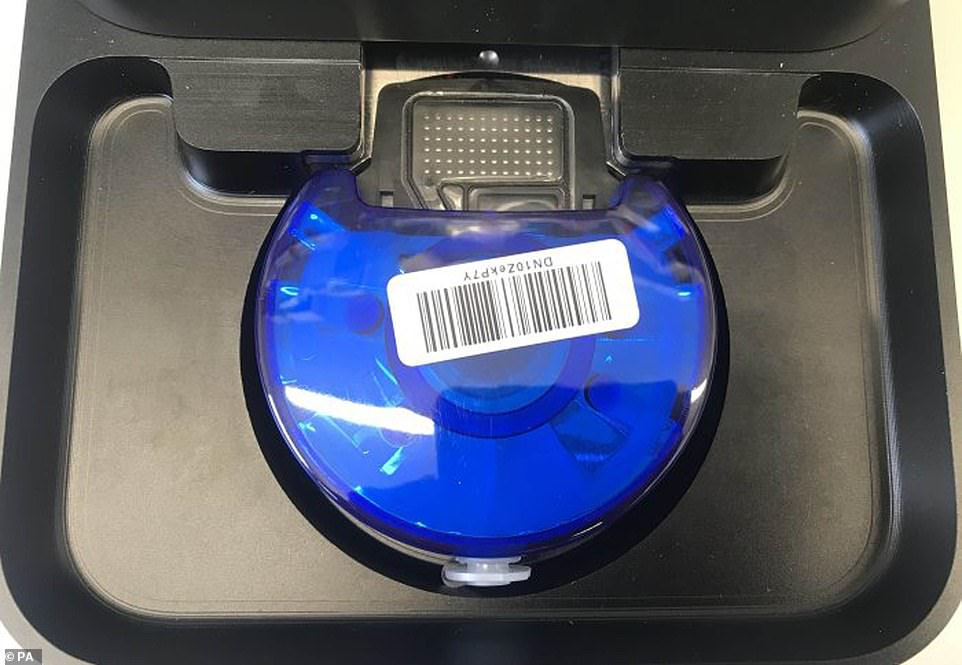 DNANudge is one of two firms behind rapid coronavirus testing kits.

The tests – which give results in 90 minutes –  were rolled out this month.

But, despite being hailed as ‘life-saving’ by Health Secretary Matt Hancock, there is no publicly available data about their effectiveness and experts have demanded publication of data to confirm they are accurate.

DNANudge announced the government had placed a £161million order for 5.8million tests, the equivalent of £27 per swab.

Rapid tests, also called ‘point-of-care’ tests, are those which can be operated on site, such as in GP surgeries, care homes, prisons, and potentially at airports and ports.

DNANudge was co-founded by the distinguished  Christofer Toumazou, who set up the Imperial College Institute of Biomedical Engineering, and biologist Maria Karvela.

Outsourcing giant Serco, is one of the companies contracted to train call centre staff for the government’s test and trace programme, which has been a dismal failure.

It has failed to trace high numbers of people with links to those who have come down with coronavirus, with the aim of getting them to isolate themselves.

As far back as June it was revealed thousands of staff were spending their work hours chatting about Netflix, dental treatments and where they plan to go on holiday because they did not have enough work to do.

In the screenshots, one team leader is even seen discussing his dream to visit Disneyland.

Serco – which is run by Rupert Soames, a grandson of Winston Churchill and brother of ex-Tory MP Sir Nicholas Soames – has also hit the headlines for the wrong reasons in the past amid concern at the amount of money it makes from public contracts.

The Hampshire-based private contractor has been hit by a string of controversies in the past few years, including claims in 2013 that it had charged the government for electronically monitoring people who were either dead, in jail, or had left the country.

NHS Professionals is owned by the Department of Health and Social Care (DHSC).

It has more than 130,000 staff on its books and says it saves the NHS more than £70million per year.

It has one contract with the Department of Health worth £155million to help the NHS win the fight with coronavirus.

A US-based medical technology firm founded by Stephen MacMillan that in the past mainly focused on women’s health.

It signed a £151million deal with the DHSC in April to supply training and equipment to UK labs to boost coronavirus testing.

These two firms were handed contracts from the Scottish and Welsh governments, and the Environment Agency, to make food deliveries to those who were shielding.

Under the protocol put in place for the most vulnerable to coronavirus – mainly those with underlying health issues – they were asked to rely on friends and family members to ship and perform other talks for them while they stayed indoors.

But there were many people who had no friends or family living nearby, who therefore required help with daily basics.

The ten largest contracts awarded during the lockdown (source: Tussell) 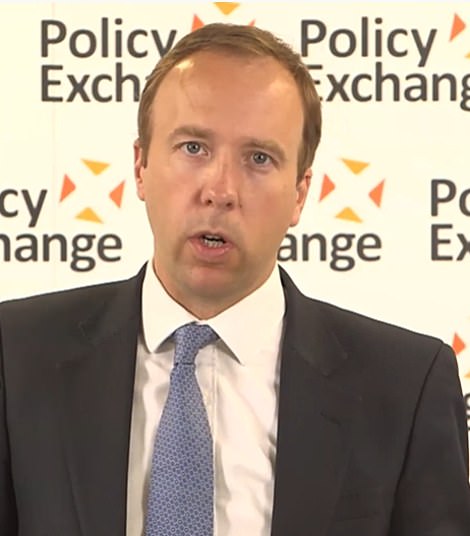 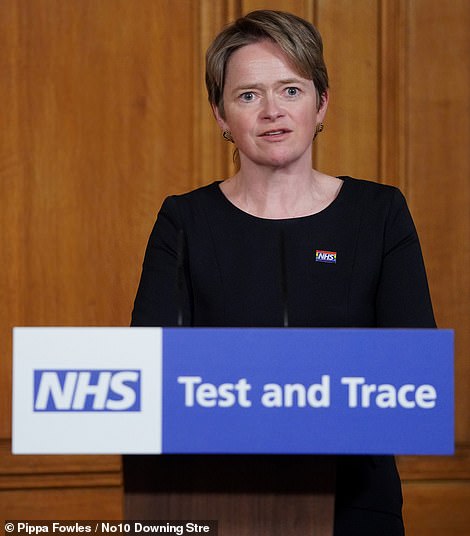 Matt Hancock officially axed Public Health England this week after a series of failings during the coronavirus crisis. He was criticised for handing the reins of its replacement to Baroness Harding (right) 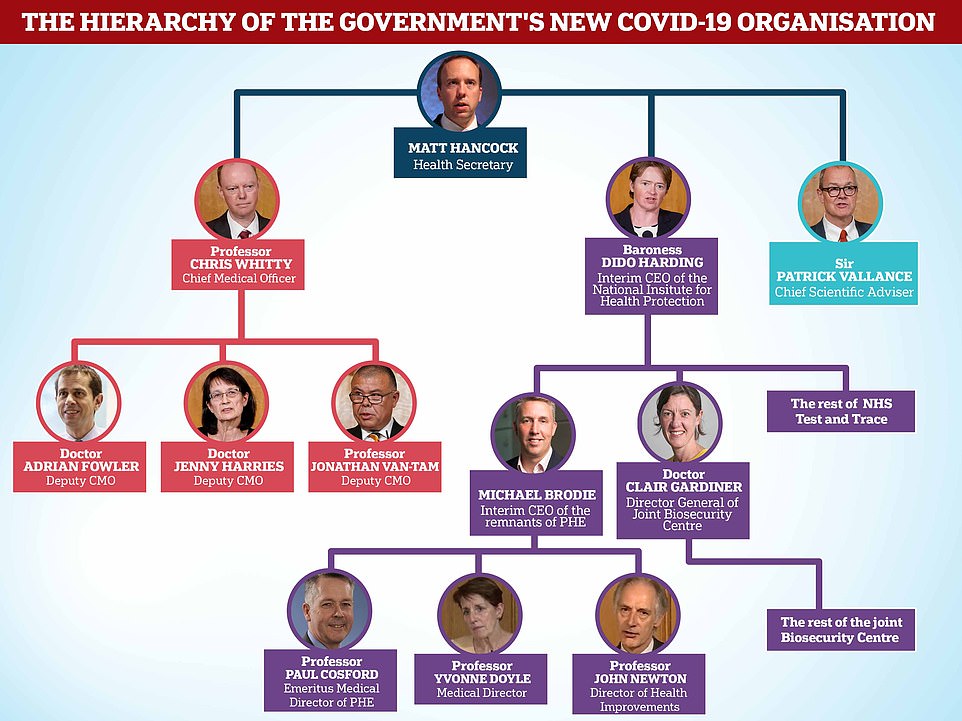 Chain of command: Baroness Harding will report directly to the health secretary after her appointment as interim chief of the new National Institute for Health Protection (NIHP) today

A management consultancy received a Government contract worth than half-a-million pounds for six weeks of work on the ‘vision, purpose and narrative’ of the replacement for Public Health England.

McKinsey was handed  £563,4000 of taxpayers money earlier this year, before this week’s announcement that much-criticised PHE was to be replaced by a new National Institute for Health Protection (NIHP).

NIPH is to be led by Baroness Dido Harding as interim chief executive.  The choice of the former TalkTalk head has provoked criticism after she oversaw the botched test and trace system for the NHS.

She is also a former consultant for McKinsey, according to the Financial Times.

The FT reported that McKinsey was hired to create a report outlining the ‘mission and vision’ of the planned new body by the end of June.

One six-figure contract went to a management consultancy for six weeks of work on the ‘vision, purpose and narrative’ of the replacement for Public Health England.

McKinsey was handed £563,4000 of taxpayers money earlier this year, before this week’s announcement that much-criticised PHE was to be replaced by a new National Institute for Health Protection (NIHP).

The process took six weeks, according to a recently published contract, meaning the firm was banking about £19,000 a day for the work.

NIPH is to be led by Baroness Dido Harding as interim chief executive.  The choice of the former TalkTalk head has provoked criticism after she oversaw the botched test and trace system for the NHS.

Baroness Harding was an employee at McKinsey for over half a decade.

The Tory peer worked as a consultant at its central London offices for seven years until 1995, before taking on executive roles at the likes of Tesco and Talk Talk.

McKinsey, sometimes referred to by insiders as ‘The Firm’, was contracted to correspond with three members of the Government’s Covid response team, the Financial Times reports. One of those was Baroness Harding.

Other large contracts have been handed out by NHS England to various hospital trusts across the UK, to fund the building of Nightingale Hospitals to prevent emergency care being overwhelmed by the seriously ill. They totalled almost £326million.