Government is braced for Extinction Rebellion CYBER ATTACK over the weekend

Civil servants have been warned they could be the victim of a cyber attack by climate change activists.

In an email entitled ”cyber security threat this weekend’ Parliamentary Digital Service’s cyber security team warned them to update and strengthen passwords and check official accounts over the bank holiday weekend for any ‘suspicious activity’, the Guido Fawkes blog reported. 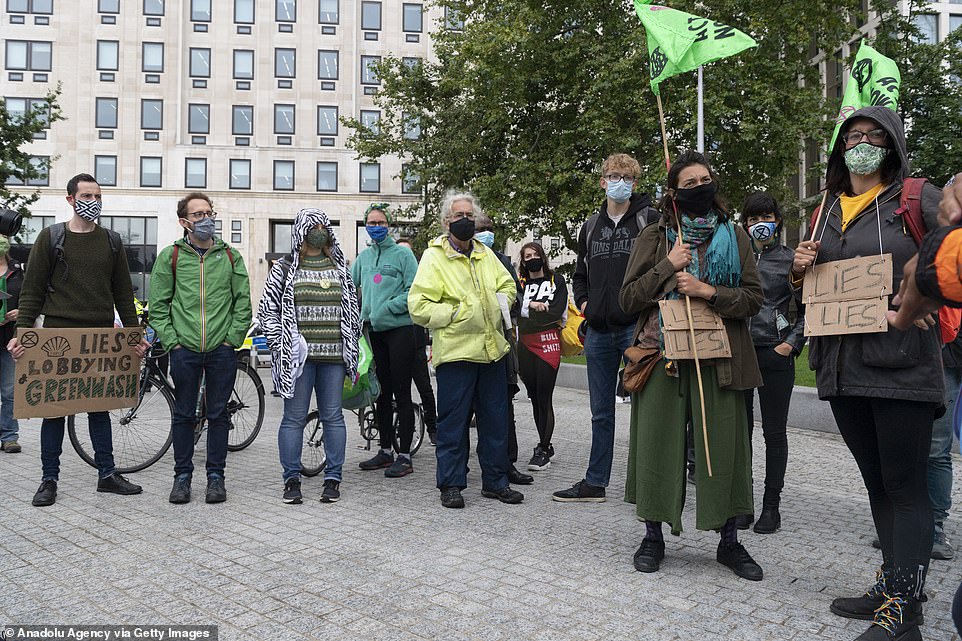 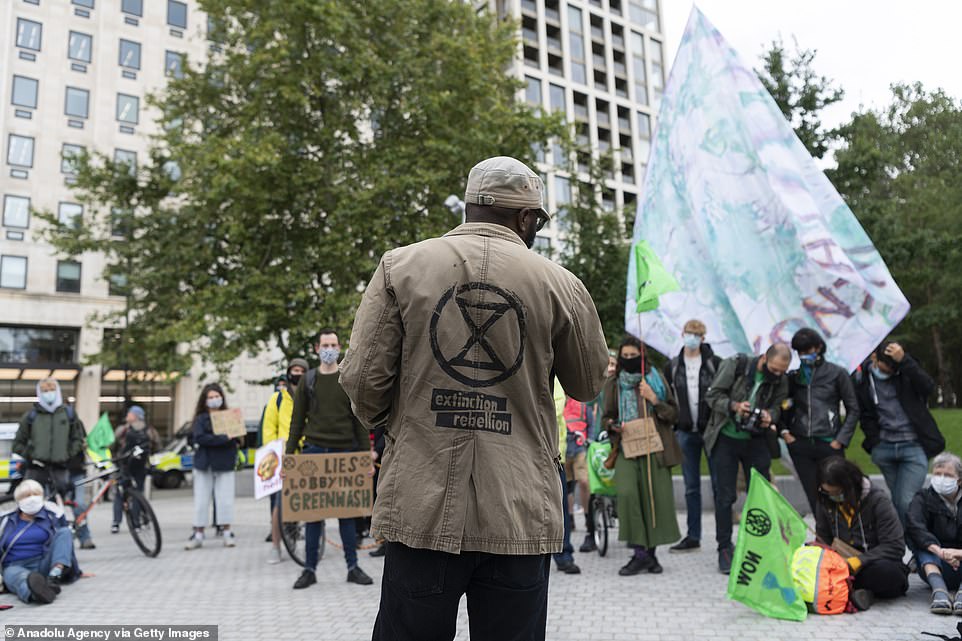 The group, pictured in London today, are calling for Shell to stop all exploration for oil and gas & begins a rapid process of ending fossil fuel extraction 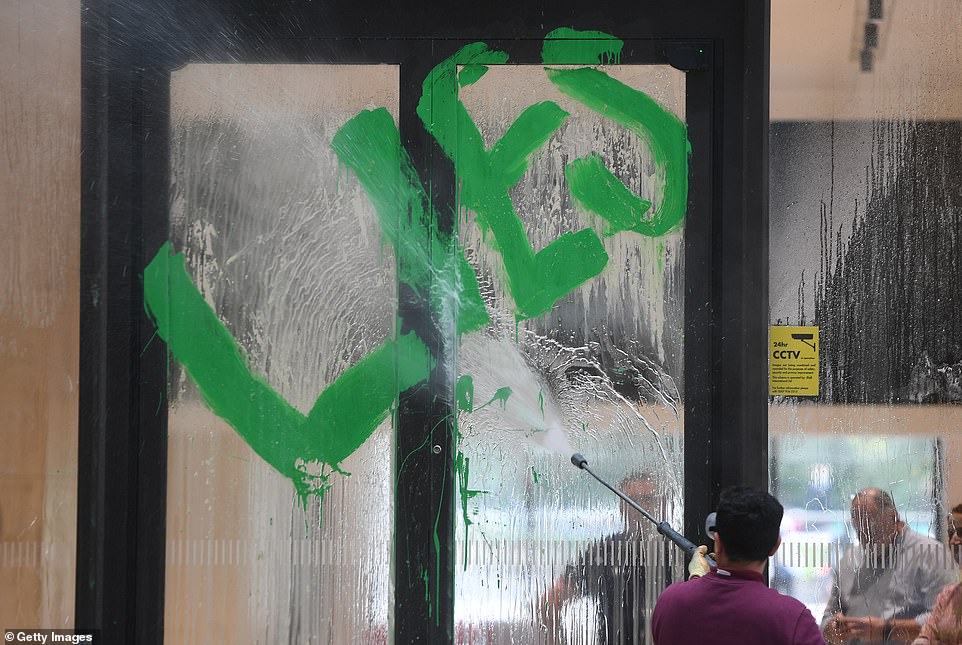 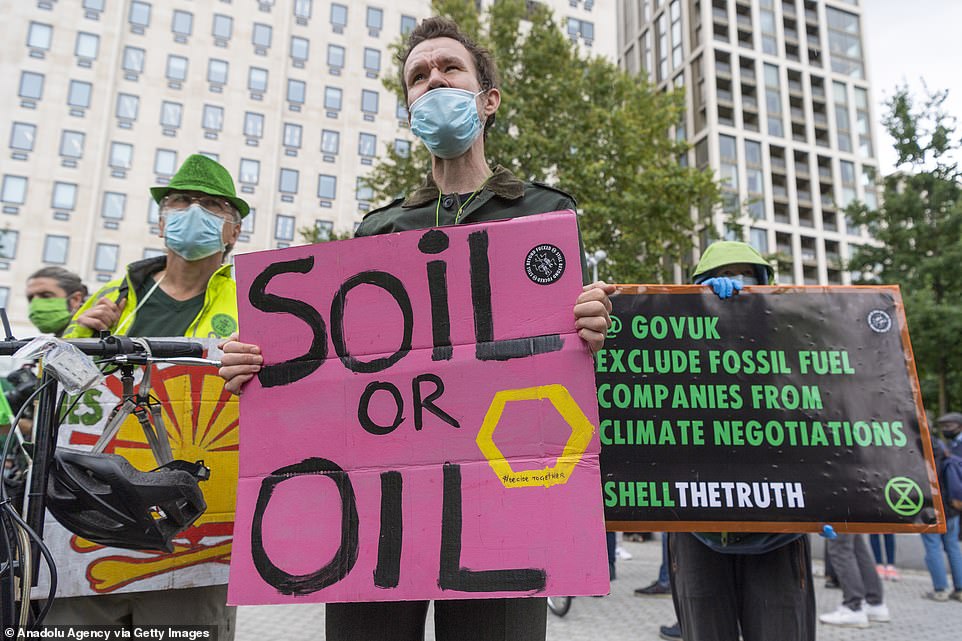 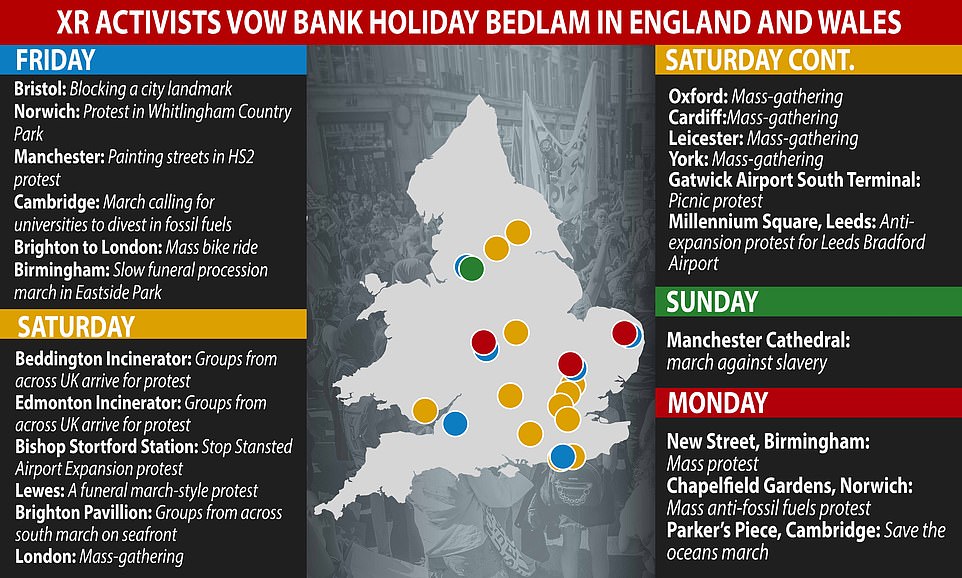 They had painted the word ‘lies’ in large green letters on the glass front doors of the building as other protesters held up a banner.

‘Officers attended and two women aged 33 and 47 were arrested on suspicion of criminal damage. Both remain in custody,’ a police spokesman said.

Extinction Rebellion, whose protests brought parts of London and other cities to a halt last year, has said it is restarting mass demonstrations this week having paused them earlier in the year due to the coronavirus.

It plans to target airports and impose roadblocks during the bank holiday weekend as it kicks off a new programme of climate change demonstrations.

Beginning today a ‘regional rebellion’ over four days will see protests staged across the country, including in London, Manchester, Bristol, Cardiff and Leeds. 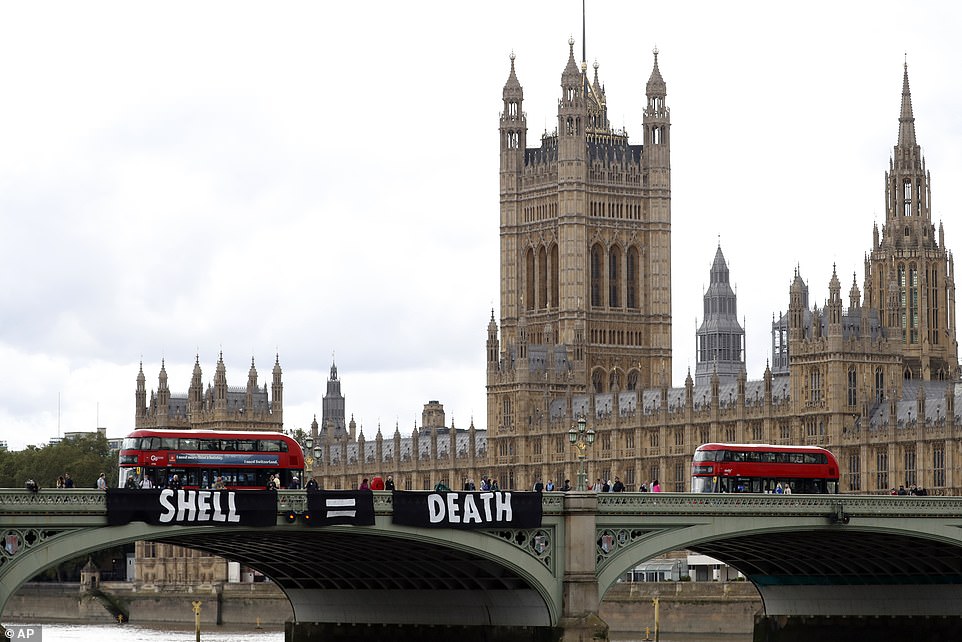 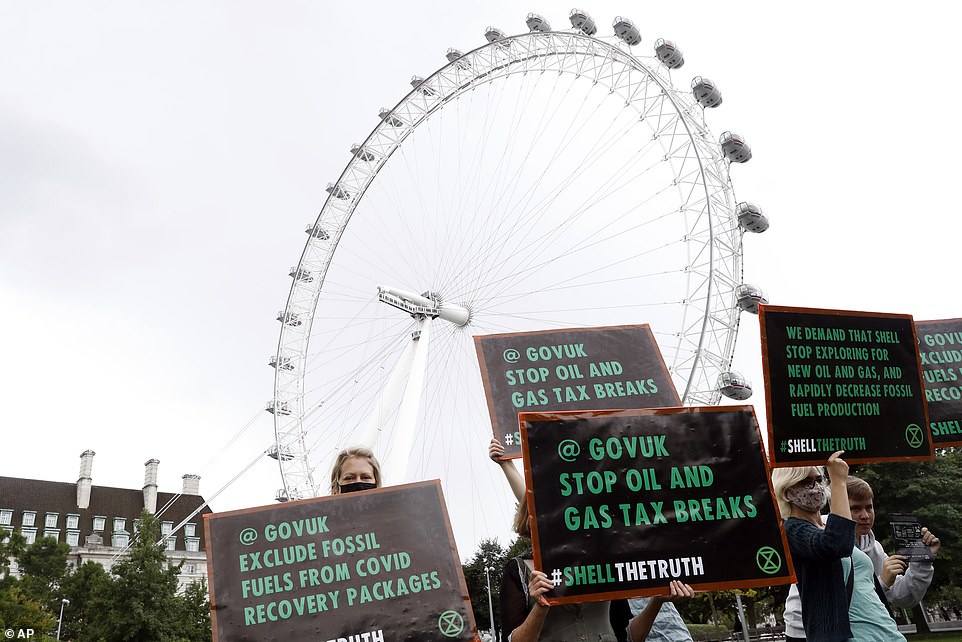 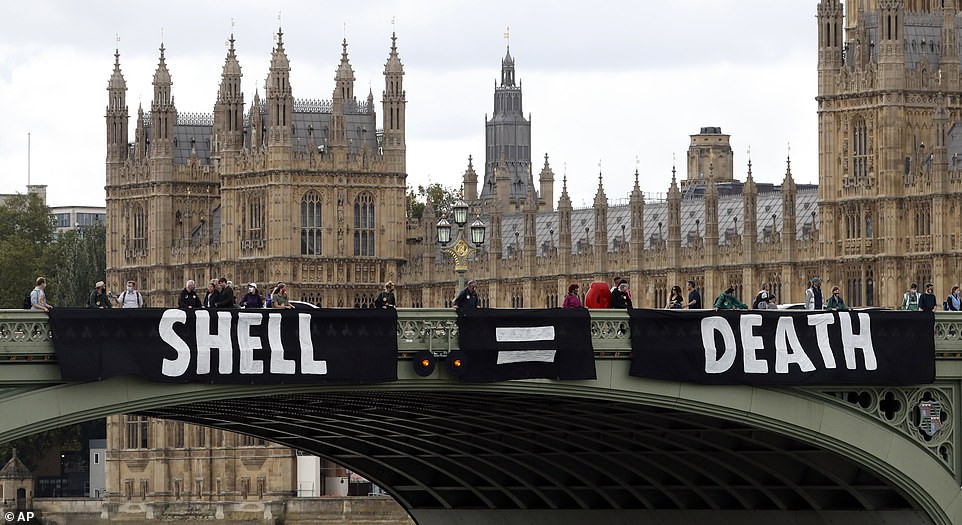 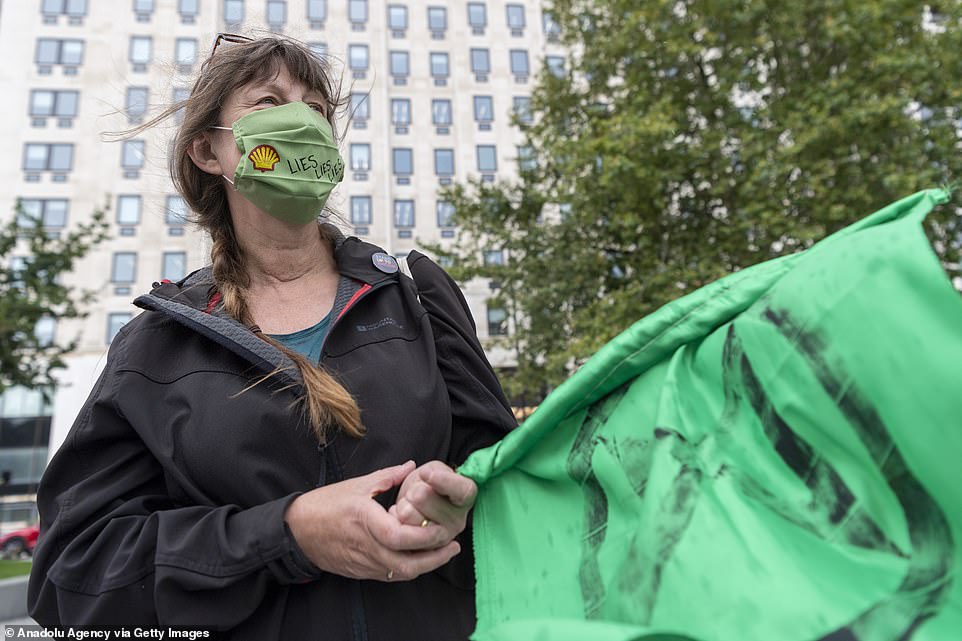 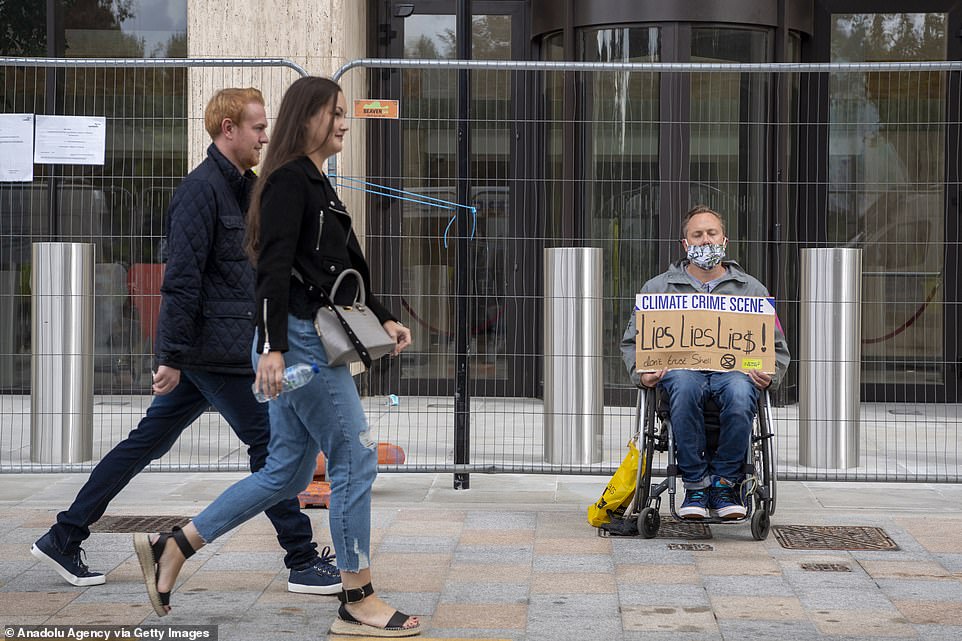 Due to the coronavirus pandemic and its impact on travel, protesters are encouraged to take action locally with the aviation sector, banks, the fossil fuel industry and petrol stations as targets.

The protests are being held ahead of larger-scale demonstrations planned for London, Manchester and Cardiff on September 1.

Protests this weekend are expected to include roadblocks, marches, sit-ins, bike rides and picnics, with campaigners emphasising their ethos of ‘non-violent direct action’.

XR supporters will also be encouraged to protest digitally, and urged to phone their MPs and ‘institutions of power’. 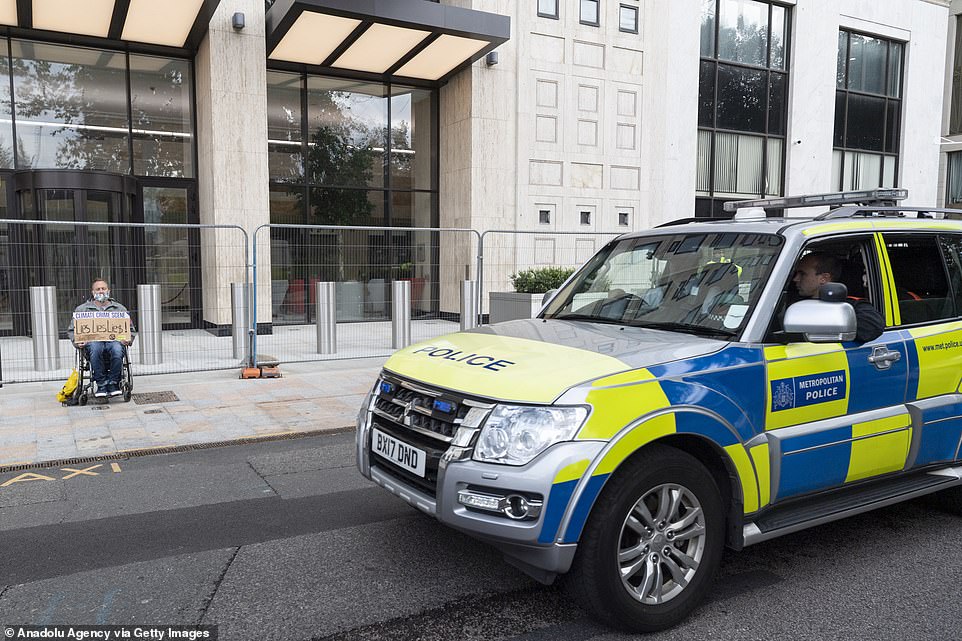 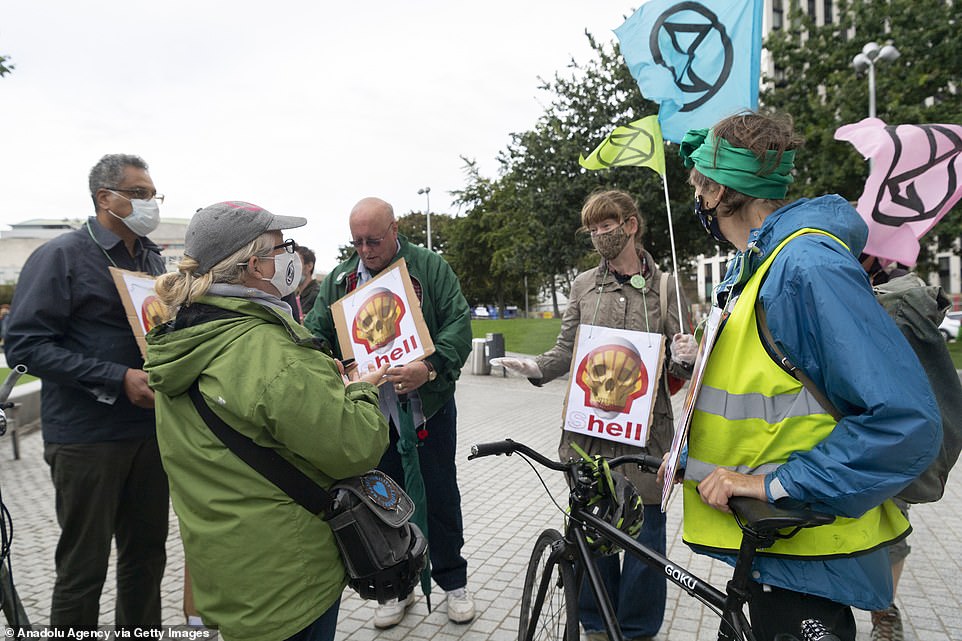 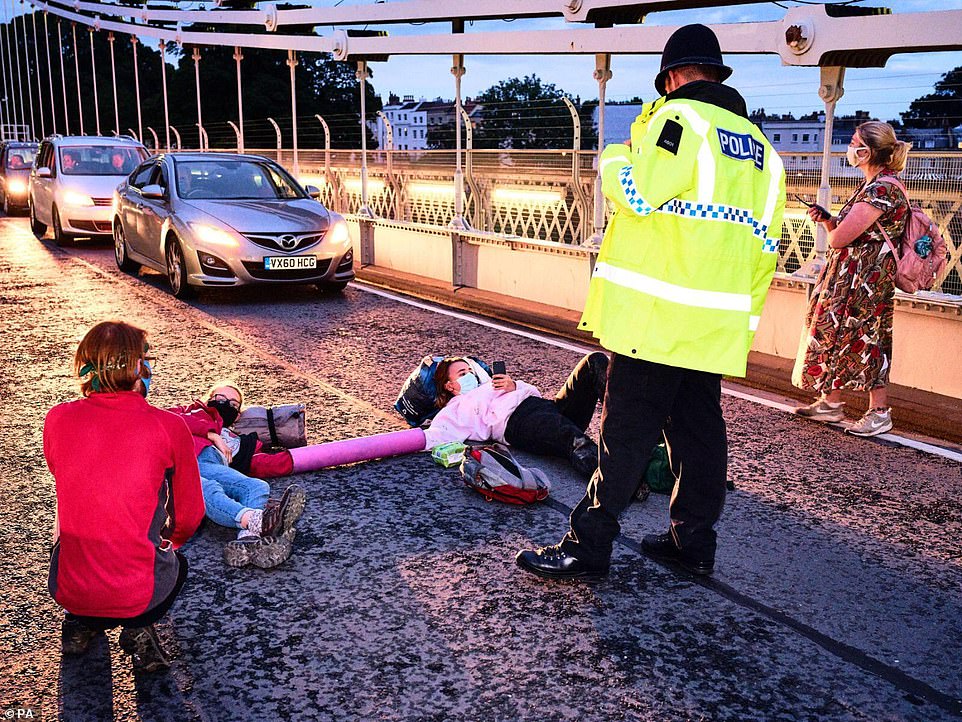 Charlie Siret, 19, and Fern, 18, locked themselves together and blocked the Clifton Suspension Bridge in Bristol last night

Anneka Sutcliffe, from XR Actions Circle, said a ‘few thousand’ people had indicated on Facebook they would join the London events, but numbers were expected to be lower than at demonstrations held in October.

Other protests will include a roadblock on Prince Street Bridge in Bristol, a mass bike ride from Brighton to London, banner drops and rallies against the expansion of Luton Airport and the aviation industry at Gatwick Airport.

Avon and Somerset Police said the Clifton Suspension Bridge would close from midnight on Thursday because of the Bristol protest, and could be shut until 6am on Tuesday at the earliest.

What events are Extinction Rebellion planning over their four-day ‘regional rebellion’?