Studies so far suggest the risk of getting ill from Covid-19 is low among children – but those in secondary school appear just as likely as adults to carry and spread the disease.

SAGE had for weeks been calling for a ‘circuit breaker’ lockdown over half-term while schools were out to boost the impact of shutting down the nation without obstructing education.

But University College London’s Professor Andrew Hayward, an epidemiologist and member of No10’s New and Emerging Respiratory Virus Threats Advisory Group (NERVTAG), said the consequence of ignoring that advice was that the national lockdown may last longer than the 28 days announced on Saturday.

Professor Hayward claimed thousands of lives would have been saved if the Government had imposed the two-week circuit-break, when first advised on September 21.

He told BBC Radio 4’s Today programme: ‘I think one of the consequences of not closing secondary schools would be that we may need to be in lockdown for longer than we might otherwise have to be.

‘So, it’s really a trade-off between education and other parts of the economy, and, to a certain extent, the number of deaths that we’re prepared to see.’

Professor Hayward is the second SAGE member to admit publicly that lockdown may be in place for longer than a month because of secondary schools.

Sir Jeremy Farrar, director of the Wellcome Trust, said on Sunday the Government may have to reconsider keeping schools open during lockdown if the transmission rate in secondary schools doesn’t drop.

And Professor Neil Ferguson, the epidemiologist whose modelling prompted the UK-wide lockdown in March, admitted that the R rate won’t drop as low from the second lockdown because schools and universities are still open. 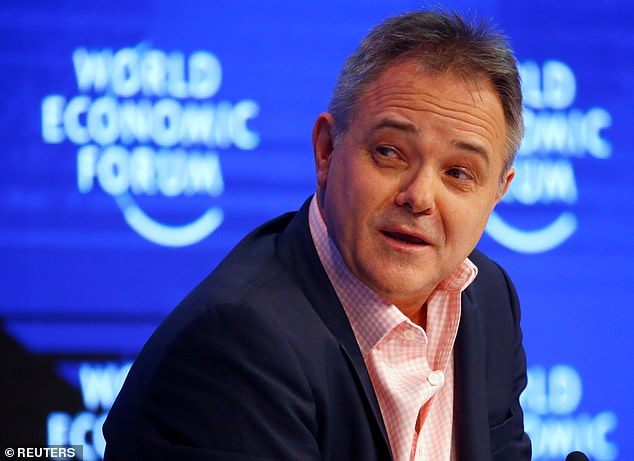 The National Education Union – which represents more than 450,000 teachers – has called for the Government to close schools and colleges with the introduction of new national restrictions in England, saying that not doing so will mean the measures are less effective.

Its joint general secretary Kevin Courtney said: ‘We think it is a real missed opportunity, it’s another half measure and, without school closures as part of it, it is unlikely to have the effect that the Prime Minister wants.’

The country’s biggest teaching union has launched a petition to ‘put schools in lockdown’, which gathered more than 100,000 signatures within hours of the Prime Minister’s speech on Saturday night.

But Cabinet Office Minister Michael Gove said the Government wanted to keep pupils in classrooms even if it meant extending the lockdown.

More than 100,000 people sign teaching union petition to CLOSE schools – but Michael Gove says the government is willing to EXTEND lockdown to keep them open

A fight to keep classrooms open during lockdown was brewing last night after the biggest teaching union launched a campaign to shut them.

Michael Gove said it was so important to keep schools open that Whitehall was willing to extend the national lockdown for the cause.

But the National Education Union, which represents more than 450,000 teachers, is gaining increasing support.

The union’s campaign has already won the backing of senior Labour figures, while their petition to ‘put schools in lockdown’ gathered more than 100,000 signatures within hours of the Prime Minister’s speech on Saturday night.

Cabinet Office minister Mr Gove told the BBC’s Andrew Marr Show: ‘I do believe that we want to keep schools open and I believe that the measures that we are putting in place will enable us to do so.’

Molly Kingsley, co-founder of parents’ group Us For Them, said: ‘It is crucial that schools are kept open as normally as possible.

‘If this was really about health issues, then why weren’t the unions calling for closures weeks ago?… It’s really hard to believe that any teacher would want to deny education to children at this crucial moment.’

Next summer’s GCSEs and A-levels have been also thrown into fresh doubt, with heads saying a planned three-week delay was now a ‘wholly inadequate solution’.

The Government insists schools and universities will be exempt from the shutdown so learners can ‘keep progressing towards exams and the next stage of education or employment’.

But the Department for Education has still not published its contingency plans around exams after this year’s grading chaos, or issued any new guidance to schools on the latest lockdown.

Nor is there detail on extra testing provision for staff or pupils, beyond Boris Johnson’s promise on Saturday for ‘rapid turnaround tests’ that will be rolled out in ‘a matter of days’.

NEU leader Kevin Courtney said that by not including schools, the lockdown was ‘another half-measure’, and was ‘unlikely to have the effect that the Prime Minister wants’.

His union also wants rotas to be introduced after lockdown, with older pupils taking it in turn to learn from home.

Labour leader Sir Keir Starmer yesterday told Andrew Marr that the lockdown should have coincided with half term.

He agreed schools must stay open, but was publicly contradicted by Greater Manchester Mayor Andy Burnham, among others.

Mr Burnham said he supported a school shutdown to ‘create the conditions for the biggest drop in cases that we could achieve’.

Scientists have warned that the lockdown may have to be lengthened if schools stay open.

Former chief scientific adviser Sir Mark Walport told Sky’s Sophy Ridge on Sunday the virus was ‘unlikely this time to come down quite as fast as it did during the first lockdown because we have got schools open’.

And while not backing out-and-out closure, other major education unions also raised grave concerns about the Government’s plans.

A Department for Education spokesman said: ‘We are prioritising children’s and young people’s education and wellbeing… evidence has highlighted the risks of not being in education on their development and mental health.’

Professor Hayward argued a circuit breaker — a form of which has been used Scotland and Wales to curb rising cases — would also have caused less damage to the fragile economy than the four-week lockdown outlined by Boris Johnson on Saturday night.

After weeks of mocking Labour’s calls for a national lockdown, the PM completed an humiliating U-turn by announcing blanket coronavirus restrictions for England at a prime-time press conference that kicked off at 6.30pm.

The tough action was prompted by dire warnings by his chief scientific and medical advisers that the NHS could be overwhelmed by Covid-19.

They said every hospital in England was on track to be overwhelmed by mid-December and projected thousands of deaths every day by then.

Pubs, restaurants and non-essential shops will be forced to close when the second lockdown kicks in on Thursday, although, unlike the first lockdown in March, schools will remain open.

Schools will be responsible for ensuring they are implementing Covid-secure practices such as staggered break times, one way systems and mask-wearing in hallways.

Similarly, universities will also be allowed to remain open with social distancing measures in place and a mix of online and face-to-face tuition where it is safe to do so.

Students will be expected to adhere to lockdown rules while on campus and only leave their homes for permitted reasons such as for educational purposes.

It has yet to be confirmed whether students will be allowed to go home for the Christmas period.

Asked what difference it would have made if the Government had taken the advice of SAGE, Professor Hayward — who was at the meeting on September 21 — told BBC Radio 4’s Today programme: ‘Well, we can’t turn back the clock.

‘But, I think if we had chosen a two-week circuit-break at that time we would definitely have saved thousands of lives.

‘And, we would clearly have inflicted substantially less damage on our economy than the proposed four-week lockdown will do.

‘I think countries like ours that have failed to control Covid have seen they have the highest death rates and the greatest impact on the economy. And, I think we have repeatedly underestimated Covid and done too little too late, really, to control the virus and save both lives and livelihoods.’

He said shutting down multiple areas of transmission at the same time is the ‘single most effective way of stopping the virus from spreading’.

Professor Hayward added: ‘We know very clearly that the earlier you do, the more lives you will save. So the action we take now will affect really the deaths that we see in three weeks or a month’s time or beyond.

‘Early action is essential, and waiting to see if less intense measures are going to work is really quite a dangerous way of doing things.’

Scotland, Wales and Northern Ireland have all adopted a form of national lockdown in recent weeks. Only Northern Ireland shut all of its schools, while Wales banned all children in Year 9 and above from attending.

Discussing the prospect of whether schools in England should close in the second lockdown, Professor Hayward argued that ‘there is substantial transmission within secondary schools’.

But he accepted that education needs to be prioritised and that children who do get infected are ‘very unlikely to have severe consequences’.

Professor Hayward said: ‘What we need is for the R to come down to below one.

‘What we need, in other words, is for the number of cases of Covid-19 to start declining very rapidly and if that doesn’t happen, then what we’re going to see is hospitals having to turn away critically ill people with Covid-19, and not be able to treat the backlog of cases of other diseases.’

Cabinet minister Michael Gove insisted it was so important to keep the schools open that Whitehall was willing to extend the national lockdown for the cause.

But the National Education Union, which represents more than 450,000 teachers, is gaining increasing support.

Next summer’s GCSEs and A-levels have been also thrown into fresh doubt, with heads saying a planned three-week delay was now a ‘wholly inadequate solution’.

The Government insists schools and universities will be exempt from the shutdown so learners can ‘keep progressing towards exams and the next stage of education or employment’.

But the Department for Education has still not published its contingency plans around exams after this year’s grading chaos, or issued any new guidance to schools on the latest lockdown.

Nor is there detail on extra testing provision for staff or pupils, beyond Boris Johnson’s promise on Saturday for ‘rapid turnaround tests’ that will be rolled out in ‘a matter of days’.

Professor Neil Ferguson, whose modelling prompted the UK-wide lockdown in March, said it is hoped the new measures in England will reduce the R number to ‘something like 0.8, maybe 0.9’.

‘If we were doing nothing, if we were back in February, then every case would generate three others, the R is three.

‘And that means you have to reduce contacts in society by at least two-thirds below normal levels to achieve control, and we think Tier 3 measures may have reduced them 60 per cent, but 60 per cent isn’t quite enough.

‘Lockdown in March, when we were all in our homes, schools were closed as well, that achieved about an 80 per cent reduction, got R down to about 0.6.

‘We’re hoping that this new lockdown will get it down to something like 0.8, maybe 0.9; it won’t be quite as low as it was back in March, because schools are still open, universities are still open.

‘But if we can get it below one, we can get the infection numbers down, and they will go down hopefully over that one month, maybe by as much as 50%, and that just gives the NHS more breathing room.’