For many parents, playing games and making up silly stories are some of the most cherished moments with their children.

So it may come as a surprise that the Government apparently thinks families need encouragement to engage with their little ones.

It has released a ‘patronising’ five-minute video urging parents to ‘chat and play’ with youngsters – and says they should think about reading a book with them whenever they have the time.

The clip also advises families to make music with kitchen utensils and use spare cardboard boxes to fuel children’s imaginations.

Holding a sieve, Miss Kenny says: ‘One of the things that people don’t realise is that you can bring any story to life with household objects.’

Referring to the simple tips, Miss Kaplinsky admits to parents ‘you are probably doing them all already’. But she adds ‘remember you are your baby’s first teacher’.

The DfE has produced the video ahead of a campaign being launched later this year to encourage parents to incorporate ways to ‘chat, play and read’ with youngsters into daily routines.

It says the film shows that interacting with children ‘can be a fun and happy time’.

But Chris McGovern, from the Campaign for Real Education, labelled the advice as ‘patronising’ and ‘nanny state meddling’. 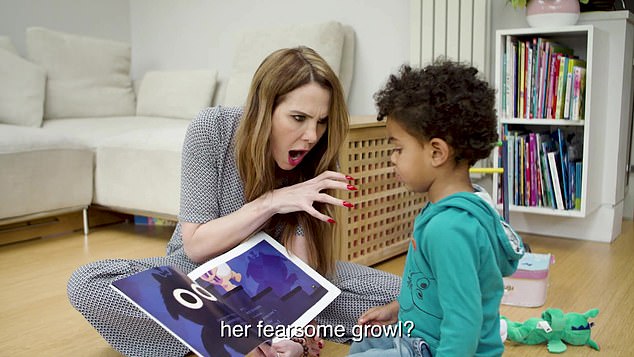 He said: ‘It’s a pitiful state of affairs when parents either have to be told to support their children or they are incapable of doing it.

‘One of the great ticking time bombs of our education system is that there are too many parents who have left school functionally illiterate and innumerate.

‘If the DfE really wants to help, rather than making a video, they need to provide an adult literacy programme and teach those parents to read and write and add up.’

Families minister Nadhim Zahawi said yesterday: ‘Children from lower income families are more likely to fall behind at school compared to their peers and once you’re behind it’s hard to catch up.

‘That’s why we are launching a major campaign to help parents incorporate ‘chat, play and read’ into their daily life, putting their children on track to succeed.’

He added that parents do not need ‘expensive books or toys to help children develop literacy skills’. He said: ‘It can be as simple as reading a library book together or making up your own stories.’

A DfE survey of 2,685 parents in 2017 found that only 51 per cent were helping their under-fives learn the alphabet or recognise words once a day or more.

More than one in four children are not achieving adequate levels of communication, language and literacy by the time they finish their reception year of primary school.