New York Governor Andrew Cuomo sexually harassed 11 women who worked for him by groping their breasts, making inappropriate remarks about their outfits, running his hands down their bodies and then retaliating against them when they complained, NY Attorney General Letitia James has found.

James released her long-awaited report into the allegations against embattled Cuomo on Tuesday.

It finds him guilty of sexually harassing 11 women including some whose allegations were not previously known, like two state troopers and an executive assistant who says he groped her breast at the Governor’s mansion in Albany in November 2020.

James said all of the allegations are corroborated but she has not recommended any criminal charges against him. It’s unclear if he will face any or if he will now step down as Governor.

Cuomo, who has always denied the allegations, is yet to respond.

The report also finds that Cuomo fostered a ‘toxic work environment’ where women were punished for reporting their allegations.

It says that instead of dealing with the complaints properly, the women were simply moved out of his orbit, into different departments.

NY governor Andrew Cuomo did sexually harass women who worked for him, New York’s Attorney General has found after a five-month-long investigation 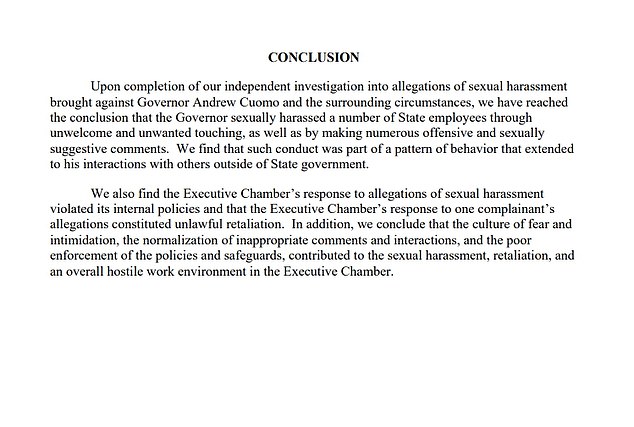 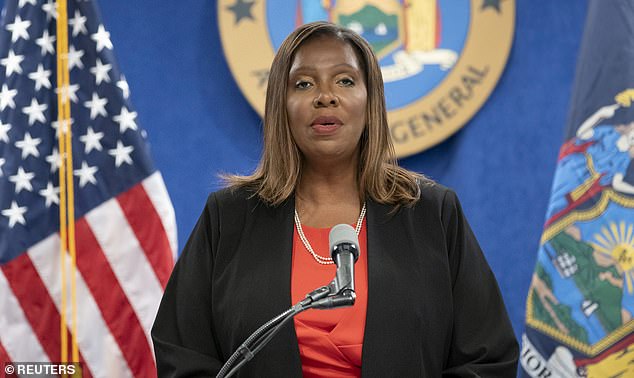 The 168-page report was released on Tuesday but it’s unclear if the Governor now faces any criminal charges.

The Governor, who has always denied the allegations, is yet to respond to the report’s findings.

Among the allegations which the report says are true is that he sexually harassed a state trooper by running his ‘finger from her neck down her spine’ while they were sharing an elevator and saying ‘hey you’.

He is also said to have rubbed a state employee’s stomach, ran his finger across the chest of another woman, and engaged in ‘widespread pattern’ of subjecting women to ‘unwanted hugs’.

The report concludes: ‘The Governor sexually harassed a number of State employees through unwelcome and unwanted touching, as well as by making numerous offensive and sexually suggestive comments.

‘We find that such conduct was part of a pattern of behavior that extended to his interactions with others outside of State government.’

Non-consensual touching, repeatedly made comments of a sexualized, gender based nature.

Cuomo was grilled for 11 hours as part of the investigation.

During questioning, the report says he ‘did not dispute that he sometimes commented on staff members’ appearance and attire (although generally only to compliment), and stated that, being “old fashioned,”.

He said he uses terms like ‘honey’, ‘sweetheart’ and ‘darling’ and that he regularly gave women hugs and kisses – sometimes on the lips.

The report says Cuomo groped ‘Executive Assistant One’ repeatedly sexually harassed her when she worked for him by subjecting her to ‘close and intimate hugs’, ‘kisses on the cheeks and forehead’, ‘at least one kiss on the lips’ and ‘touching her butt’.

He allegedly referred to her and one other assistant as ‘mingle mamas’ and asked her repeatedly if she would ever cheat on her husband.

In November 2020, he allegedly groped her breast at the Executive Mansion in Albany.

‘For over three months, Executive Assistant #1 kept this groping incident to herself and planned to take it “to the grave,”4 but found herself becoming emotional (in a way that was visible to her colleagues in the Executive Chamber) while watching the Governor state, at a press conference on March 3, 2021, that he had never “touched anyone inappropriately.”5 She then confided in certain of her colleagues, who in turn reported her allegations to senior staff in the Executive Chamber, the report says.

The report says Cuomo sexually harassed a state trooper, referred to as Trooper #1, who he hired onto his protective detail, bending the three-year experience requirement.

Once she was on his team, he allegedly ‘sexually harassed her on a number of occasions’ by ‘running his hand across her stomach  from her belly button to her right hip while she held a door open for him at an event’, ‘running his finger down her back’ while they were in an elevator together and saying “hey you”, kissing her on the cheek.

He also allegedly asked her to help him find a girlfriend and said he wanted someone who ‘liked pain’, and asked her why she wanted to get married, saying ‘your sex drive goes down’.

‘Trooper #1 found these interactions with the Governor not only offensive and uncomfortable, but markedly different from the way the Governor interacted with members of the PSU who were men, and she conveyed these incidents contemporaneously to colleagues,’ the report reads.

Bennett worked briefly for Cuomo as an aide. AG Letitia James says her allegations that Cuomo harassed her with a series of comments are corroborated.

Among his alleged remarks are questions about if she’d date older men, asking her help to find a girlfriend, and apparently quizzing her on a sexual assault she had endured.

One of the other comments that he made was that he wanted to ride into the mountains with women.

The unidentified employee said she attended an event with Cuomo in September 2019.

After giving a speech, Cuomo is said to have posed for pictures with her.

While the picture was being taken, he ‘grabbed her butt’.

‘The employee was shocked and discussed it with a number of friends, family and co-workers,’ the report says.

She also ‘memorialized the Governor’s inappropriate touching’ contemporaneously, but the report doesn’t say how.

One of the women whose allegations were corroborated was the doctor who performed his COVID-19 test at one of his March 2020 press conferences.

She says that when he told her, in front of cameras ‘nice to see you doctor, you make that gown look good,’ it was sexual harassment.

They also said that before the test, he asked her not to swab him so hard that it ‘hit his brain’.

She replied that she’d be ‘gentle but accurate’ and he said ‘I’ve heard that before,’ which the doctor said was ‘implied in a sexual nature’.

Virginia Liammiatis worked for an energy company and was wearing a t-shirt with the company’s name written across her chest when she says she met Cuomo.

He ran his ‘two fingers across her chest, pressing down on each of the letters as he did so and reading out the name of the company as he went’.

The report says he then ‘leaned in, with his face close to her cheek, and said “I’m going to say I see a spider on your shoulder” before brushing the area between her shoulder and her breasts’.

‘Ms. Limmiatis came forward in this investigation after she heard the Governor state, during the March 3, 2021 press conference, that he had never touched anyone inappropriately.

‘As Ms. Limmiatis testified to us, “He is lying again. He touched me inappropriately. I am compelled to come forward to tell the truth… I didn’t know how to report what he did to me at the time and was burdened by shame, but not coming forward now would make me complicit in his lie, and I won’t do it.”’

Boylan says that Cuomo made inappropriate remarks to her when she worked as Chief of Staff to the CEO of the Empire State Development Corporation including that he found her attractive and that he wanted to play strip poker.

She also says that he physically touched her on various parts of her body, including her waist, legs, and back.

She claims that once she reported her allegations, she was victimized by his team who ran a smear campaign against her while she ran for office.