The head of Goya Foods has quietly blocked an agreement to sell off part of the company that would have left him out of a job, a new report claims.

CEO Robert Unanue, who sparked calls for a Goya boycott when he visited the White House on July 9 and said Americans are ‘truly blessed’ to have Donald Trump as their president, managed to quash a minority stake sale that would have valued the canned foods giant at $4billion, insiders told the New York Post.

The sources said that Goya’s board of directors had tentatively agreed last month to the proposed deal with BDT Capital Partners, a firm that invests in family and founder-led companies with a goal of expanding them or taking them public.

The deal would have required Unanue to vacate his position within 18 months so a new CEO could be brought it, sources said.

Despite having initially signaled their support, the board of directors ultimately voted against the deal last Wednesday amid the ongoing controversy over Unanue’s endorsement of Trump.

The Post reported that Unanue, who owns less than a five percent stake in the company, convinced two directors to change their votes at the last minute by agreeing to add two independent seats to the family controlled board.

Goya Foods CEO Robert Unanue (pictured) quietly blocked an agreement to sell off part of the company that would have left him out of a job, a new report claims 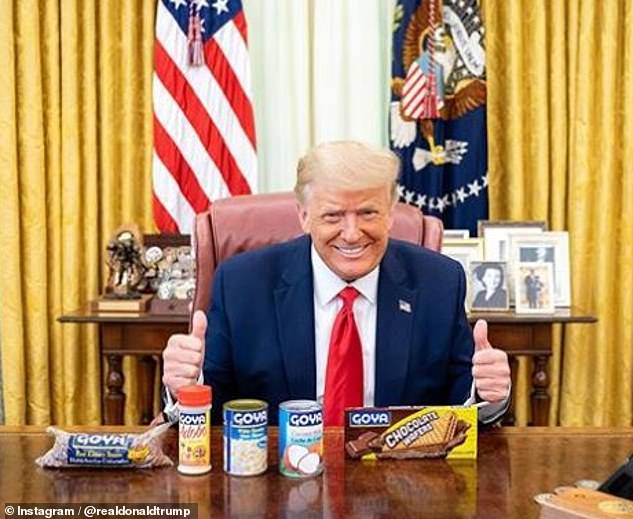 Unanue sparked calls for a Goya boycott when he visited the White House on July 9 and said Americans are ‘truly blessed’ to have Donald Trump as their president. Trump later posed with a selection of Goya products in the Oval Office to show his support for the brand

Insiders claim that the timing of the reversal has prompted speculation among member’s of Goya’s founding family that Unanue may have publicly praised the president in an effort to ensure that the deal didn’t go through.

‘I don’t think it was a coincidence,’ a source close to the family told the Post.

‘All of a sudden there is going to be a shareholder vote and here he is, saying this stuff about Trump.’ 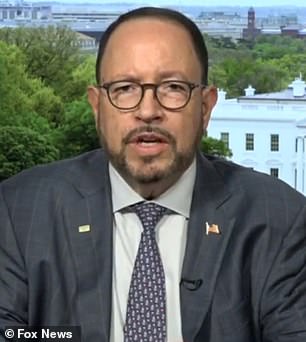 Unanue has repeatedly defended his support for Trump and said that those calling to boycott his brand – including New York Rep Alexandria Ocasio-Cortez and former presidential candidate Julian Castro – were ‘killing our nation’ engaging in ‘suppression of speech’.

Trump supporters responded to the boycott by launching their own ‘buy-cott’ urging people to go out and buy Goya products.

The buy-cott has been trumpeted by the Bodega and Small Business Association, whose secretary-treasurer Francisco Marte lambasted the boycott as ‘enforcing political conformity on one of this country’s most successful job creators’ while ‘harming Hispanic-immigrant-run stores that work long hours to make ends meet amid a challenging economic and health crisis’.

Data about the impact of the boycott vs buycott is not yet available as Goya is not publicly traded – but Unanue indicated that the support far outweighs the outrage in an interview with the Wall Street Journal published over the weekend.

‘You see the great majority of people gravitating to love and to positivity. It far outweighs, sometimes, the very loud voice of negativity, of a minority that can bring the sheep in to follow.’ 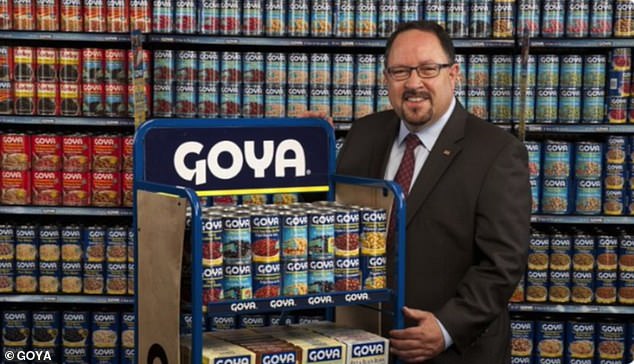 Robert Unanue, grandson of Goya founder Don Prudencio Unanue, became the CEO in 2004 after he teamed up with his cousin Frank Unanue Jr teamed up to oust their uncle from the role

A source close to Goya’s founding family, of which Unanue is a member, said that the company’s sales spiked immediately after the White House visit – but the boycott movement has since been gaining traction.

The source said that some family members feel that the brand could suffer from Unanue’s alignment with Trump in the long term, particularly because of the president’s tough stance on immigration.

They also said that Goya itself is does not have a political stance and is not aligned with Trump.

Goya was founded by Don Prudencio Unanue in 1936 after he immigrated to New Jersey from Spain.

Today the family is split into three factions, each of which has three seats on the nine-member board, the source said.

Robert Unanue, Don Prudencio’s grandson, became the CEO in 2004 after he teamed up with his cousin Frank Unanue Jr teamed up to oust their uncle from the role he’d held for nearly 30 years.

The source said that the alliance between the Robert and Frank family factions has sometimes been fraught with tension in the years since the former grandson took over – and the scrapping of the BDT deal threatens to bring renewed drama.

Another insider said that Goya’s board also voted this week to allow management to decide how to handle the boycotts in a move that showed support for Unanue.

DailyMail.com has reached out to Goya, Unanue and BDT for comment about the purported deal.

The failed BDT deal marked the second time in under a year that Unanue was able to keep his job after an agreement to sell part of the company went bust.

Last fall Goya was in talks to sell a controlling stake under a deal that also would have replaced Unanue as CEO.

Goya denied the existence of the Carlyle sale at the time, and sources said it backed out at the last minute.

‘This was supposed to be a control transaction … and the family apparently changed its position in the last couple of weeks,’ Carlyle co-founder David Rubenstein told Fox Business in November. 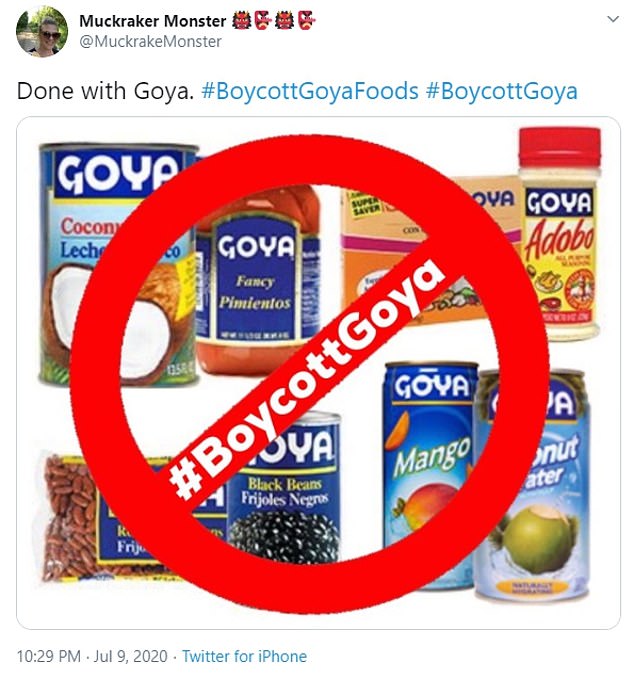 Twitter outrage: Alexandria Ocasio-Cortez and former Democratic 2020 presidential candidate Julian Castro were among those calling on the public to boycott Goya

In the weeks since Unanue praised Trump the brand has received an outpouring of support from members of the First Family.

Donald Trump Jr boasted about a dinner he cooked with Goya ingredients on Instagram last week.

‘Lot of Goya products, which was pretty awesome. Just had a great pork roast. It was very good.’

His video came as his sister Ivanka was accused of breaking White House ethics rules by tweeting her support for the company.

‘If it’s Goya, it has to be good,’ she tweeted, echoing the company slogan.

Under the rules government officials are barred from using their public office to endorse specific products or groups.

‘Only the media and the cancel culture movement would criticize Ivanka for showing her personal support for a company that has been unfairly mocked, boycotted and ridiculed for supporting this administration – one that has consistently fought for and delivered for the Hispanic community,’ said Carolina Hurley, White House spokesperson.

‘Ivanka is proud of this strong, Hispanic-owned business with deep roots in the US and has every right to express her personal support.’

Her father also tweeted his support for Goya, but as president, he is exempt from many of the rules that federal workers must follow. 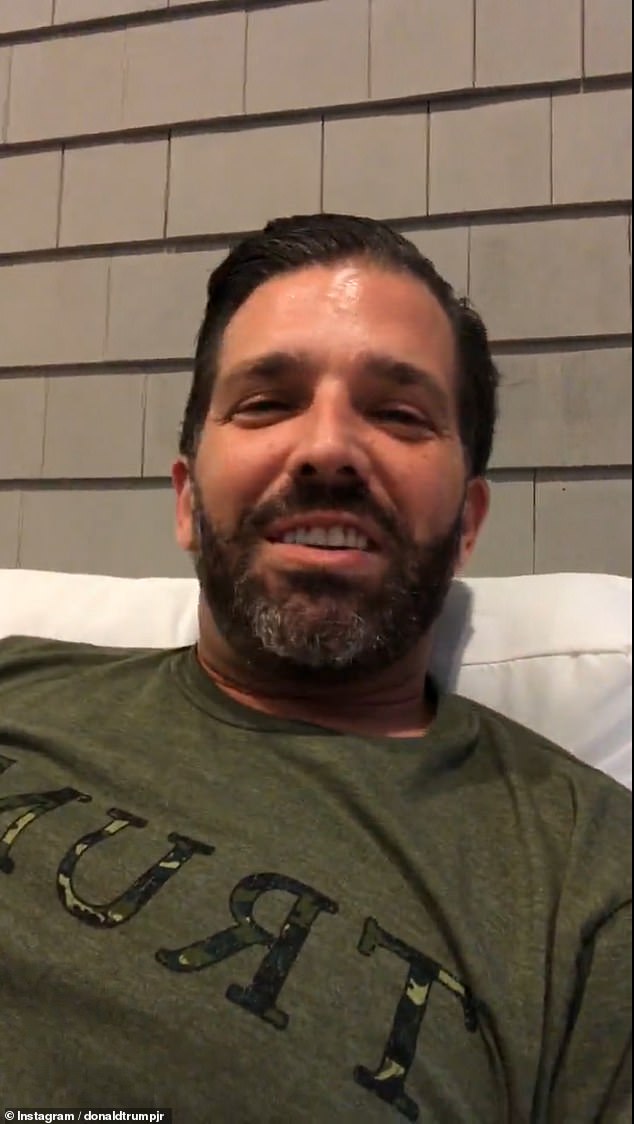 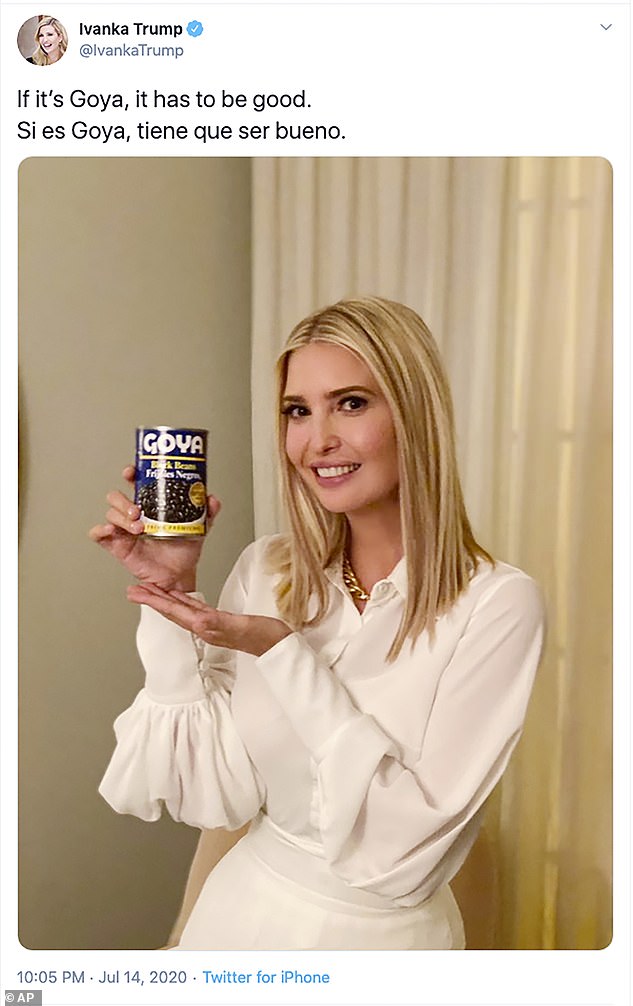