GP reveals meaning behind eight most common nightmares for kids

Don’t let the bedbugs bite! Child therapist and a GP reveal the meanings behind your child’s most common nightmares – including how movies like ‘Toy Story’ can manifest as scary dreams

Nightmares are common for lots of children, and while parents may try to convince kids there’s nothing to be afraid of, experts reveal the dreams are often a sign of stressful factors in real life, playing out in the child’s unconscious mind.

From being frightened by monsters to the feeling of being chased, the experts say that each terror suggests a deeper meaning.

Many suggest emotional distress and a feeling of being overwhelmed, while others could indicate anxiety and a fear they are not in control of their lives.

Here, FEMAIL breaks down what each type of nightmare means for your children…

Dreaming of monsters usually suggests you are facing mental and emotional distress in your waking life.

In children this can be related to something that has happened in the day, perhaps being told off by an adult such as their teacher, making that person a ‘monster’ in their dreams.

Drowning or falling in a dream could mean you are feeling overwhelmed or might even represent control issues.

Falling is a really common nightmare for children, feeling that they have a lack of control in real life and not knowing what to do or say or behave in a situation for example.

Getting lost or losing something important

This type of dream may also occur if children get lost in real life.

It typically suggests that you are anxious about something, in children this can be related to separation anxiety, especially if the child is moving to a different stage of school/ going away.

Having a person or animal chase you in a dream could suggest you are anxious about something, or experiencing heightened or ongoing stress.

Children also tend to read stories that involve animals and it is common to have a nightmare about being chased by animals or have an animal represent the ‘villain’ in the dream.

If they are going through a stressful time at in their life, such as a new brother or sister, difficulty with homework or a new school that they are trying to ‘run away’ from.

A dream about feeling trapped suggests that you are caught in a difficult, restrictive, or even dangerous situation.

This type of nightmare usually suggests that you are nervous about a big change related to feelings of security, or the plans, goals, and the hopes you had for the immediate future. 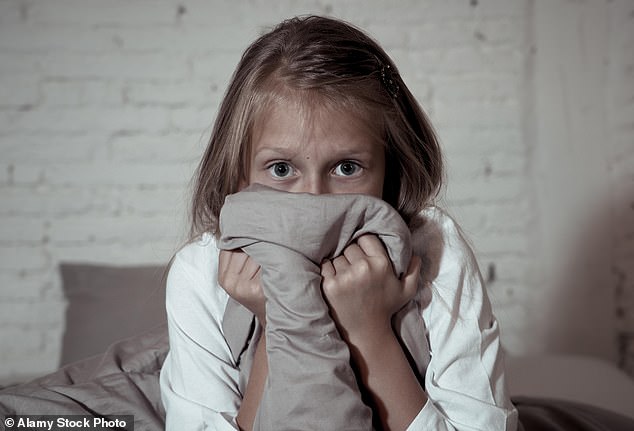 Common nightmares among children include having no friends, their teeth falling out or encountering monsters (File image)

Public humiliation or having no friends

Having no friends in a dream or experiencing a nightmare about public humiliation could mean you have feelings about being exposed as ill-prepared, incompetent, or deserving of shame.

If children have fears that they may lose a friend, or not have friends in real life, then this can be incorporated into nightmares as the child is afraid of how the situation may be.

This sort of nightmare can suggest that you are feeling a loss of control, or are worried about losing something or someone important to you.

The toys coming alive is because of certain films such as ‘Toy Story’ series.

If children have watched films like these several times, it can ‘replay’ itself during their dreams and is a frightening dream.