GPs told to hand out Calpol amid fears of resistance

Doctors are being told to give Calpol rather than antibiotics to children with ear infections.

The intervention by the health watchdog Nice comes amid growing evidence that antibiotics are gradually losing their power.

Decades of overuse by GPs have rendered the drugs ineffective and the bacteria they are meant to treat have evolved to become resistant.

In draft guidelines published today, Nice is urging doctors to give paracetamol or ibuprofen to children with common ear infections.

This includes Calpol and similar medicines containing paracetamol or liquid forms of ibuprofen such as Nurofen. Nice claims that the majority of common ear infections clear up by themselves within one or two days.

A major study in 2015 found that 60 per cent of children with earache were in less pain after 24 hours, without taking antibiotics.

But the watchdog tells GPs to prescribe drugs to children with severe symptoms which suggest a more serious infection. Today’s recommendations mark a major shift in direction for doctors and will undoubtedly worry parents.

Around one in four children have at least one ‘middle’ ear infection before they are ten and they are most common in toddlers aged 15 to 18 months. The advice is in a set of 30 guidelines from Nice on how antibiotics should be used sparingly for the most common illnesses. Over the coming months the watchdog will publish separate advice covering sore throats, sinus infections, bladder infections and kidney infections.

Only this week the World Health Organisation warned that antibiotic resistance was a ‘global health emergency’. Officials said many existing drugs were becoming ineffective and yet there was a ‘serious lack’ of new treatments in development. Professor Gillian Leng, deputy chief executive and director of health and social care at Nice, said the recommendations would ‘support GPs and healthcare professionals to decide whether or not to use antibiotics’.

She explained: ‘We must make sure the people who need them are given them, but routine prescribing in all cases isn’t appropriate.’

Dr Tessa Lewis, a GP in Newport South Wales helping to draw up the advice, said: ‘Many toddlers and children with this type of ear infection will get better within a few days by managing pain with paracetamol or ibuprofen at home. 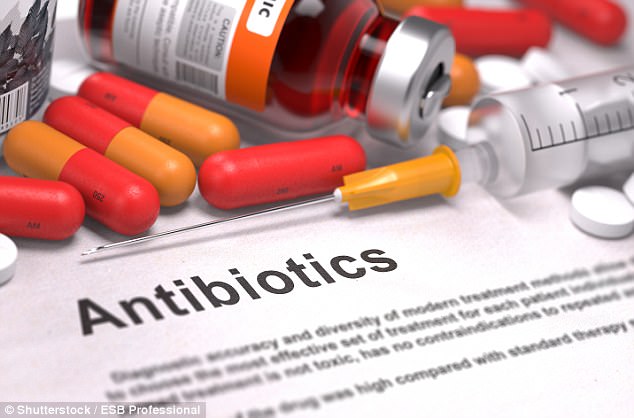 ‘If they don’t improve within days, the draft guidance advises GPs consider a back-up antibiotic prescription.’ The back-up applies to children suffering several infections over a few months – and lets them wait for a few days for the infection to clear up. However if there is no change, they can go to the pharmacist.

The Chief Medical Officer Dame Sally Davies has previously warned that the threat of antibiotic resistance was as severe as terrorism.

She said people could routinely die from cuts, minor ops or caesareans after developing an untreatable infection. Professor Helen Stokes-Lampard, chairman of the Royal College of GPs, said: ‘Ear infections can be horrible … particularly for children and parents whose children are in pain – but they usually clear up on their own without antibiotics, so we welcome this draft Nice guidance today.’