The proportion of students in England who achieve first-class degrees has risen by 80 per cent over the last decade, new analysis reveals.

Across 148 providers considered by the data, 13.9 percentage points’ worth of first class degree attainment was said to be ‘unexplained’ by changes in graduate population.

Education Secretary Damian Hinds warned earlier this year that quality must not be ‘cast aside’ to ‘inflate an institution’s reputation or league table ranking’ – and insisted that artificial grade inflation must be ‘stamped out’.

In a document released today, the Office for Students reported: ‘The proportion of UK-domiciled, full-time first degree graduates attaining a first class honours degree from an English higher education provider has increased from 16 per cent in 2010-11 to 29 per cent in 2017-18, an overall increase of roughly 80 per cent over the period.

The watchdog looked at why the proportion of students awarded first-class degrees could have risen this drastically, including students finishing school with better qualifications, but much of the increase could still not be explained, the analysis stated.

Universities have previously vowed to halt grade inflation after a soaring number of first-class degrees led to accusations of dumbing down.

Universities UK (UUK), which represents vice-chancellors, earlier this year pledged for the first time to ‘tackle’ the problem and end the rise in the number of firsts dealt out.

Mr Hinds, who said the figures were ‘disappointing and risk compromising the public trust in the high standards of our universities’, had previously warned that any university producing an inexplicable rise in top degrees will face intervention from the regulator Office for Students. 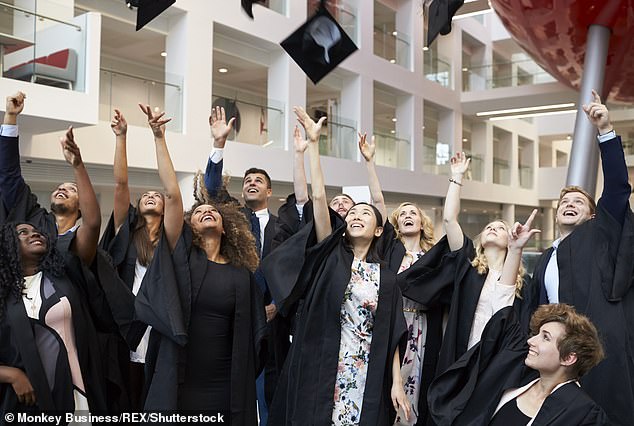 Across 148 considered providers, 13.9 percentage points’ worth of first class degree attainment was said to be ‘unexplained’ by changes in graduate population (stock image)

Susan Lapworth, director of competition for the Office for Students, told the BBC: ‘Worries about grade inflation threaten to devalue a university education in the eyes of employers and potential students.’

Seven years ago roughly 40 per of students who went to university with grades below three Ds at A-level were awarded an upper-second class degree (2:1) or a first, but that figure has now risen to above 70 per cent.

The Department for Education has now said that universities have been given a ‘stark warning’ and the situation needs to be addressed.

Dame Janet Beer, president of Universities UK, said that universities are ‘determined’ to tackle ‘unexplained grade inflation’, and the sector recognise how crucial it is to keep public confidence in university education.