Graduate jobs: Number of roles is up a fifth on pre-pandemic levels

Graduates stand a better chance of bagging a job this year than they did before the pandemic, new statistics suggest.

They’re most likely to get hired in well-paid sectors such as energy, engineering and health and pharmaceuticals.

That’s because graduate job vacancies are forecast to rise 22 per cent this year compared to 2019, according to a survey by the Institute of Student Employers which surveyed the UK’s largest graduate employers.

In a further boost to those coming out of further education, the ISE adds that starting salaries are set to increase as companies fight to fill roles.

Spoilt for choice: job vacancies for graduates will this year increase by a fifth compared to 2021

Stephen Isherwood, chief executive of ISE, said: ‘The number of graduate jobs has slowly increased but this is the first time we’ve seen hiring back to pre-pandemic levels.

‘It demonstrates business confidence and how much employers continue to value a degree. This is great news for those job hunting.’

The pandemic had very little long-term effect on the number of opportunities for graduates and school leavers, the report suggests.

It says the pandemic has created a shortage of workers readily available to fill roles, which has resulted in an environment that is more candidate driven.

Skilled graduate workers, in particular, are in high demand as a result.

ISE’s survey comes as a leading UK recruitment firm, Robert Walters, based in Covent Garden has admitted to offering graduate lawyers £150,000 as a starting salary due to the shortage of workers.

The ISE survey shows that all sectors have returned to pre-pandemic levels of hiring apart from jobs in retail and FMCG (fast moving consumer goods). 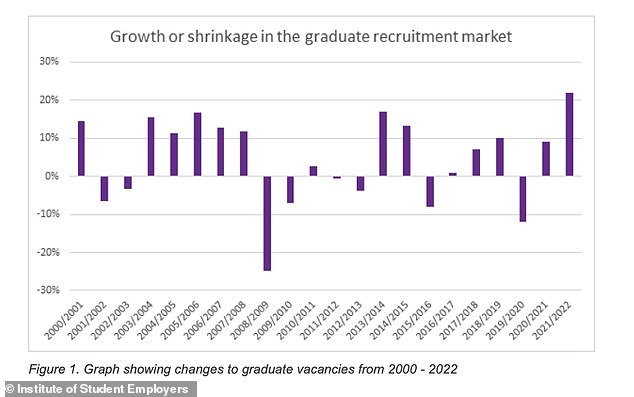 Graduates have a higher chance of getting employed in 2022 than they have in previous years, particularly when it comes to jobs scarcity during the 2008 financial crisis

But even in these two sectors things are starting to change. With FMCG, for example, the sector is currently recruiting three per cent fewer graduates than in 2019, however, it has also seen an increase in vacancies by 20 per cent from 2021 to 2022.

Meanwhile, school leaver roles in retail and FMCG have increased 55 per cent since last year.

ISE found that, overall, school and college leaver vacancies did not reduce over the pandemic but instead grew by 17 per cent compared to 2021.

In addition to this, retail and FMCG have both experienced strong growth, while finance and professional services has grown by 37 per cent and the built environment (construction sector) grew by 30 per cent.

Students and graduates should take advantage of internships and formal work experience programmes, but also recognise that working part time in restaurants or bars provides skills that employers look for.

However, employers have been disappointed with the quality of candidates that have applied for vacancies, the study found.

Around one in five of employers felt the standard of applicants had dropped and warned that students need to focus on career planning and application readiness to be successful.

Isherwood said: ‘The hike in vacancies means a return to a student-driven market.

‘However, with a significant number of employers noting a drop in the quality of applicants, students should be aware of resting on their laurels.’

‘The graduate labour market is and always has been competitive. While students should feel confident about their prospects, they need to apply themselves rigorously to their job search and make every application count.’ 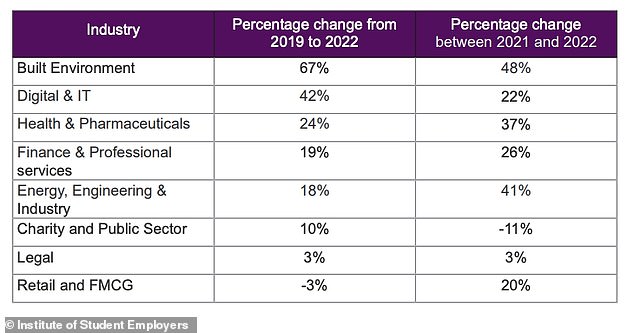 The table shows changes to graduate vacancies in 2022 compared to pre-pandemic levels, and compared to 2021

He added that there were still opportunities for graduates to improve their skills so that they were more attractive to employers.

‘Students and graduates should take advantage of internships and formal work experience programmes, but also recognise that working part time in restaurants or bars provides skills that employers look for.

‘Graduates often don’t realise the transferable skills they get from any kind of work. Gaining work experience in all its forms and understanding the skills they create is extremely valuable to employers.’ 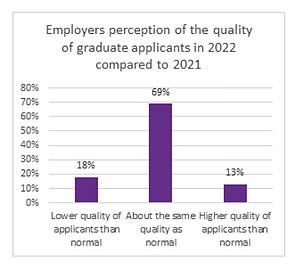 Graduates and school leavers are not the only ones to see an increase in job vacancies.

Brexit, the desire for remote working, and movements like the ‘Great Resignation’ have led to several senior roles opening up and companies across most sectors struggling to fill them, the ISE says.

Last year, This is Money highlighted that three in four professionals intended to look for new jobs in 2022.

Alex Hattingh, chief people officer at Employment Hero, said: ‘The Great Resignation is a recent buzz term that’s got a lot of people feeling excited or concerned, depending on what perspective you’re looking at it from.

‘The phrase comes from the World Economic Forum and their shocking statistic: 41 per cent of employees worldwide plan to leave their jobs this year.

‘This isn’t only totally unprecedented, for many employers and HR managers, it’s beyond comprehension.’

Isherwood adds: ‘Our understanding is that the labour market is healthy across all types of employment and there’s a strong uplift in jobs regardless of level, so what we have found in the graduate market isn’t an isolated case.

‘The pandemic led to many people reviewing their jobs, so as well as moving employer people are also career changing, which is opening up positions across the board.’

While vacancies have increased across the board, senior workers could still take advantage of the increase in graduate vacancies, particularly if they are bored of their current role.

Isherwood explained: ‘While age isn’t a barrier, graduate programmes are generally aimed at people who are starting out in a particular career and most schemes include two to three years of training.

‘So, they’re more likely to appeal to an older worker who is career changing rather than people who have worked in a sector for some time.’