An ultra-rare pain disorder causes a graduate so much discomfort she has to shower ‘like s starfish’ to avoid water touching her skin and even a light breeze leaves her in agony.

Abi Harmer, 22, from Whitstable, Kent, mysteriously woke one day with such sensitive skin she is unable to sleep and has to use crutches to get around.

After months of doctors being clueless as to what was causing Ms Harmer’s agonising discomfort, with some even suggesting it was psychological, she was eventually diagnosed with complex regional pain syndrome (CRPS) while still at university.

She said: ‘I usually tell my friends it feels like the affected area is in a bucket of ice-cold water.

‘But, instead of moving it, when you can’t stand it any longer, you just have to keep it there.

Despite her ordeal, Ms Harmer graduated from Canterbury Christ Church university last September and is slowly reintroducing the sensation of fabric and water on her skin.

She is speaking out to raise awareness of the condition and support other sufferers. 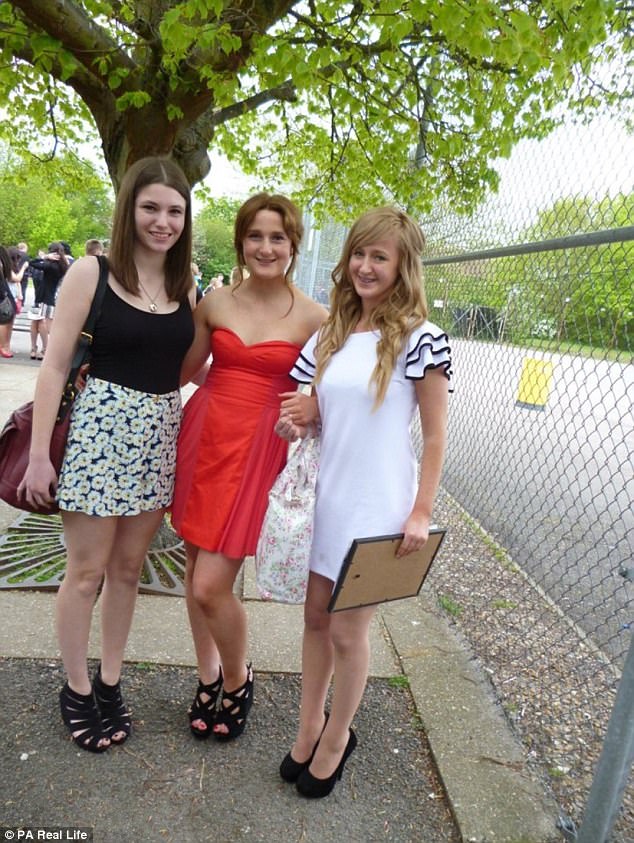 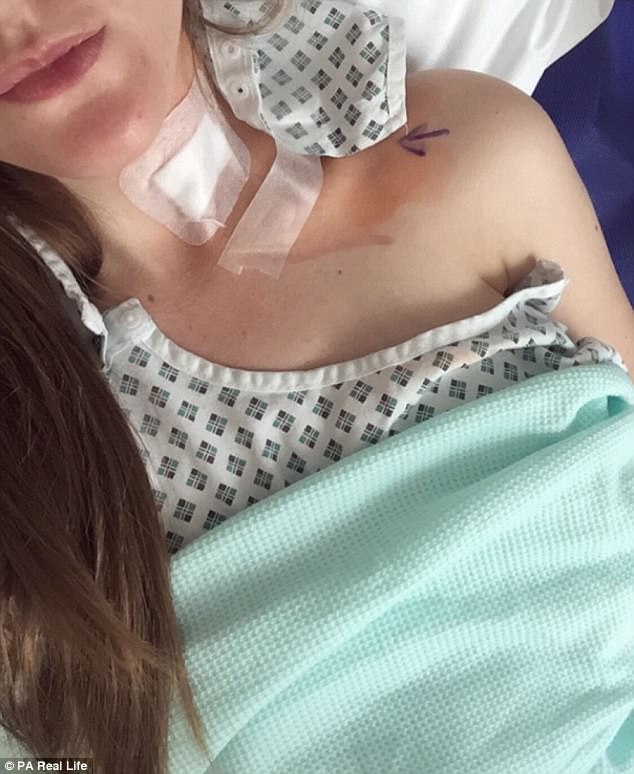 Ms Harmer endured months of excruciating pain before eventually being diagnosed, with doctors initially thinking her discomfort may be psychological (pictured in hospital)

Ms Harmer woke one morning in January 2015 to find she had completely lost the use of her left hand.

She first noticed something was wrong in the beginning of the year when she experienced what felt like water trickling down the inside of her arm and hand.

Ms Harmer initially put it down to the cold weather, however, on January 27, she woke with a burning sensation in her arm.

Her GP referred her for an urgent MRI scan at Kent and Canterbury hospital to check whether she was suffering from trapped nerves.

Yet, the results suggested there was nothing to be concerned about, with certain doctors even questioning whether the pain was psychological.

A frustrated Ms Harmer said: ‘It was getting worse and worse and I developed a skin sensitivity that was so bad, I couldn’t even stand my clothes touching it. Any sensation at all was awful.

‘I usually tell my friends it feels like the affected area is in a bucket of ice-cold water.

‘But, instead of moving it, when you can’t stand it any longer, you just have to keep it there.

‘When I wash, I have to try to keep my foot and arm out of the water because it’s so painful. I have to hold them out and my body is in a star position.

‘My sleep is one of the things that is affected the most. I get about two-to-five hours a night because of the pain. I struggle to get to sleep and then if my limbs rub against the sheets or the pillow, it wakes me up again.’

Over the next four months, the pain grew steadily worse until, eventually, Ms Harmer struggled to stand and had to use crutches with just one hand.

In May, Ms Harmer saw a physiotherapist to try to regain movement. After explaining her condition, he said she may have CRPS, which Ms Harmer researched online and found the symptoms matched her own.

In mid-August, she had an appointment to see a specialist at central London’s National Hospital for Neurology and Neurosurgery, who officially diagnosed her. 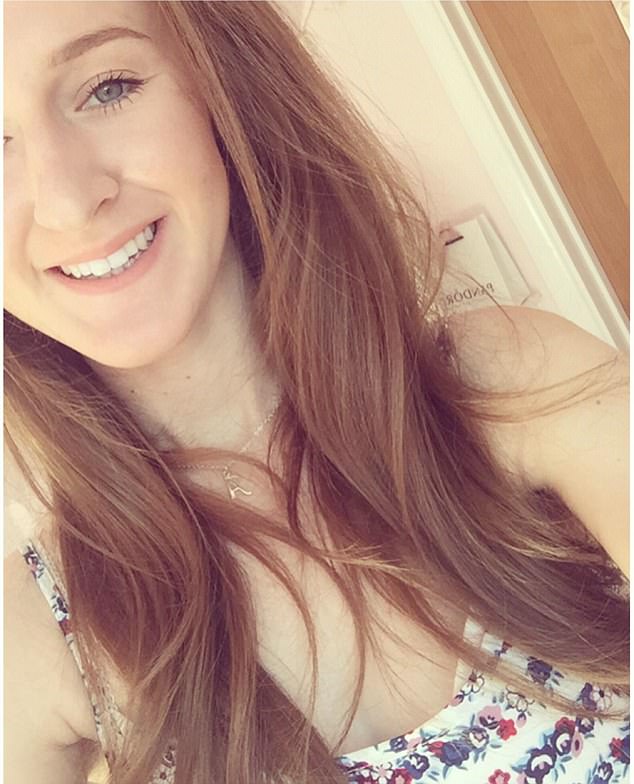 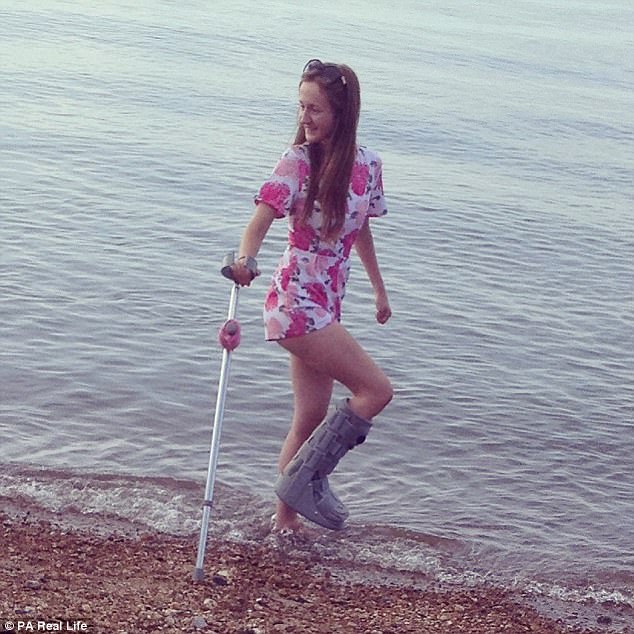 After months of uncertainty, Ms Harmer was relieved to finally be told what was causing her symptoms, but is aware some sufferers never improve.

She said: ‘I was only in my 20s and still at uni, so I was scared because I wasn’t sure if I would ever be able to walk or use my hand properly again.

‘My parents Claire and Mark, both 50, have had to help me wash as I can only use one hand now. I couldn’t do it without them.’

Despite her ordeal, Ms Harmer finished her religion, philosophy and ethics degree.

She has also been working to desensitise the areas affected by CRPS.

Ms Harmer said: ‘I can’t let any chemicals touch my skin or it comes out in a rash that looks like I have been burnt.

‘I have been introducing water and I have little patches of fabric that I have slowly introduced, which means now I am able to wear clothes over it. It means I can go out more as I can protect it from things like the wind or rain that cause a lot of pain.

‘My parents are amazing at looking after me and taking me anywhere I need to go, but it’s difficult to do things like going out with my friends.

‘My pain is really unpredictable and I don’t want to take so many strong painkillers that I don’t know what is going on.’

Ms Harmer is managing her pain using ketamine infusions but doctors are considering whether to try spinal stimulation, which sends electrical impulses into the spine. 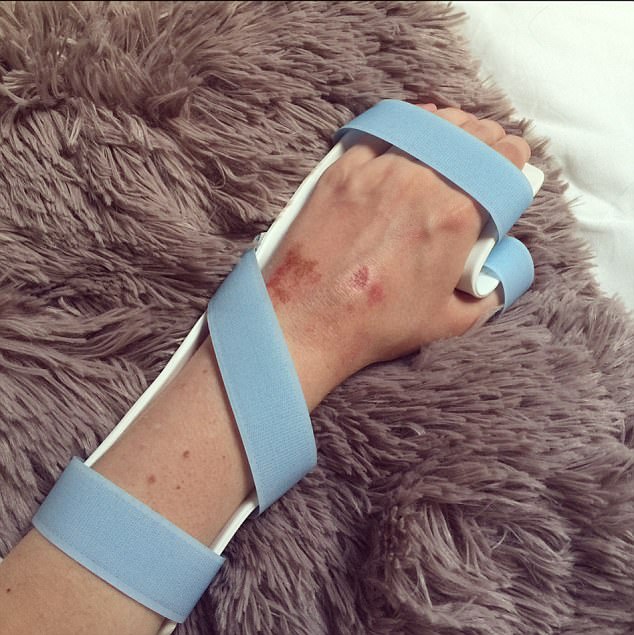 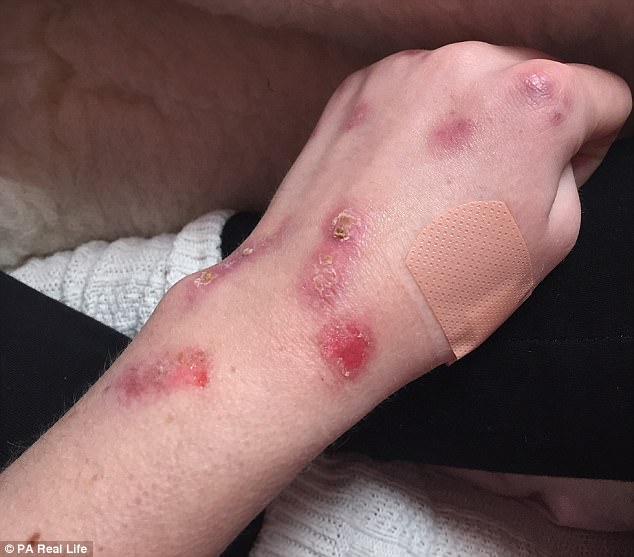 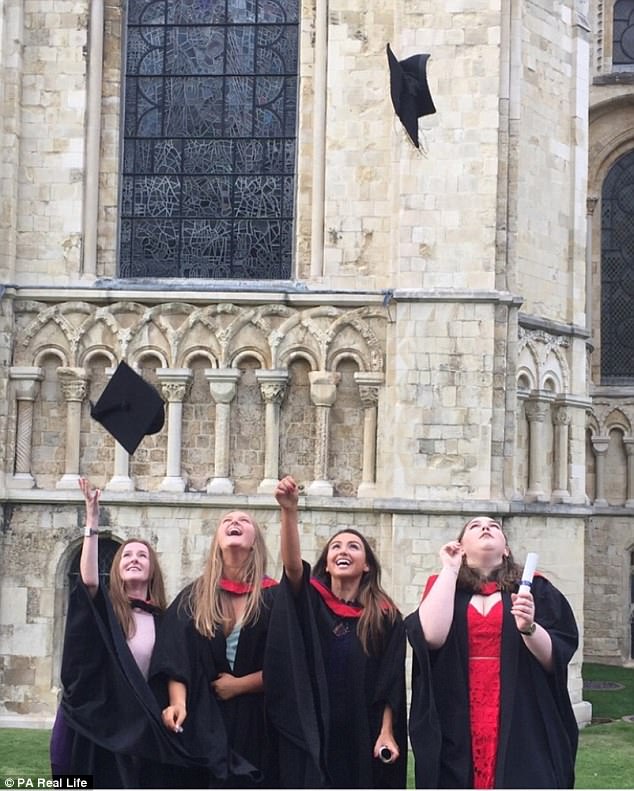 Despite her ordeal, Ms Harmer (pictured left) graduated from university last September, and is slowly reintroducing the sensation of fabric and water on her skin

The graduate is now speaking out to raise awareness of the condition, even among doctors.

‘For me, it was hard because I didn’t have any sort of injury, which is quite unusual, and it took a while to get a diagnosis.

‘I’ve met a whole community of people online with the condition and we all support each other. It’s great to have people out there who really understand the level of the pain.’