Students graduating from high school in Virginia posed by the Lincoln Memorial in Washington DC on Friday, in a surreal set of images with soldiers looking on.

The Covid-19 pandemic prevented the planned graduation ceremonies from going ahead, so on June 2 the school organised a day of virtual celebration with a slideshow and a convocation, watchable online.

And on Friday, they decided to take their graduation pictures on the steps of the Lincoln Memorial.

Troops from the District of Columbia National Guard have been stationed at the landmark since Tuesday, as anti-racism protests sparked by George Floyd’s killing in Minneapolis continue.

Their presence has angered some, with historian Kevin Kruse pointing out that during the May 1970 protests against the Vietnam War, Richard Nixon quietly left the White House and went to speak to protesters at the memorial.

He added: ‘His weaponization of sacred spaces is offensive.’

The students, however, did not look perturbed by the presence of the troops and made the most of the tradition of traveling to DC for the photo opportunity. 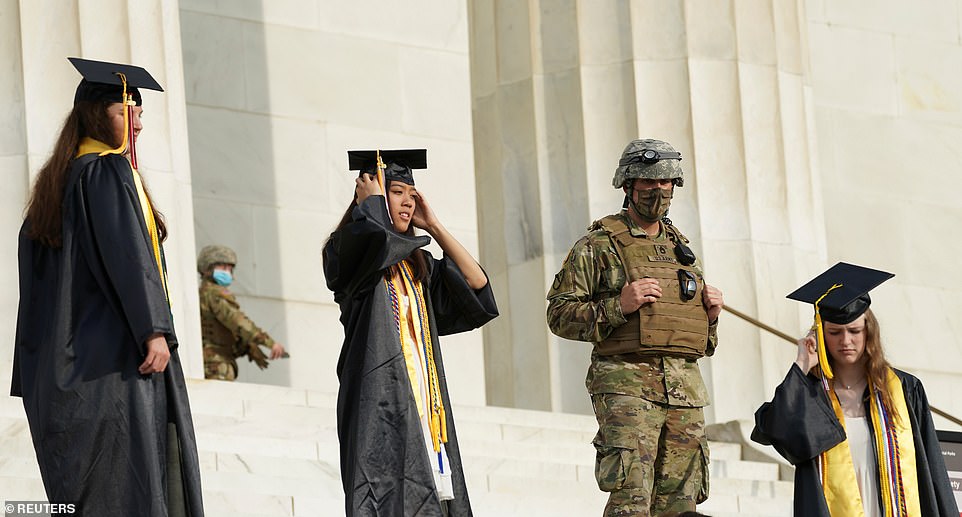 A student adjusts her mortarboard as she poses for photos on Friday at the Lincoln Memorial, with troops watching on 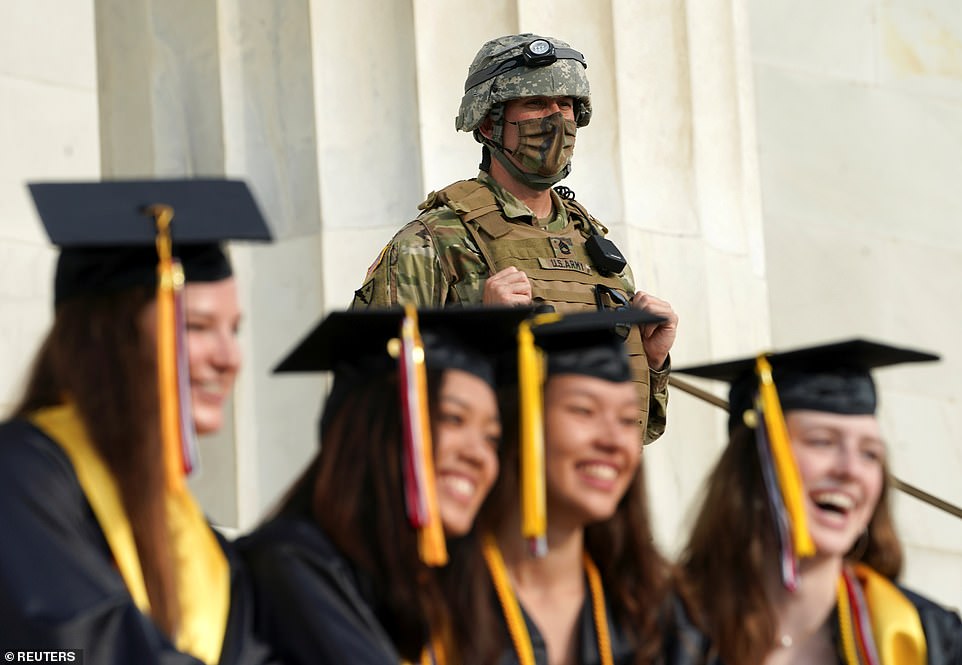 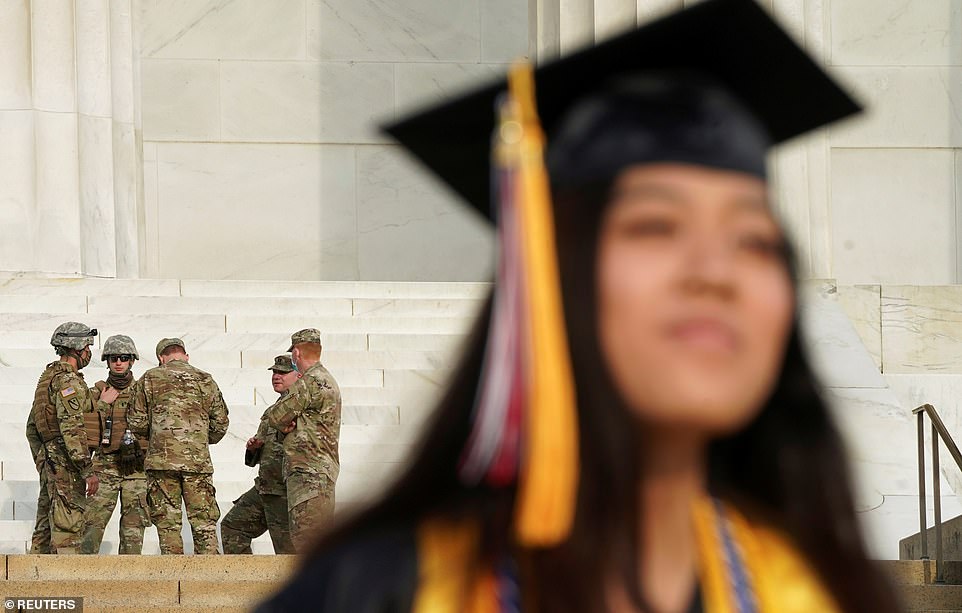 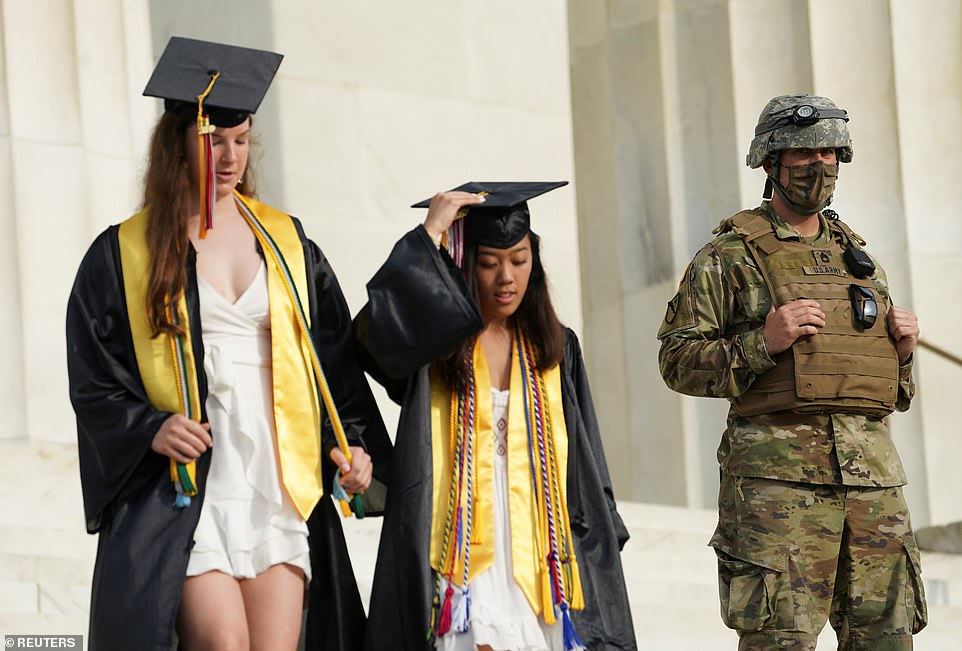 Students were unable to have their traditional graduation ceremonies this year, but kept up the tradition of posing for photos 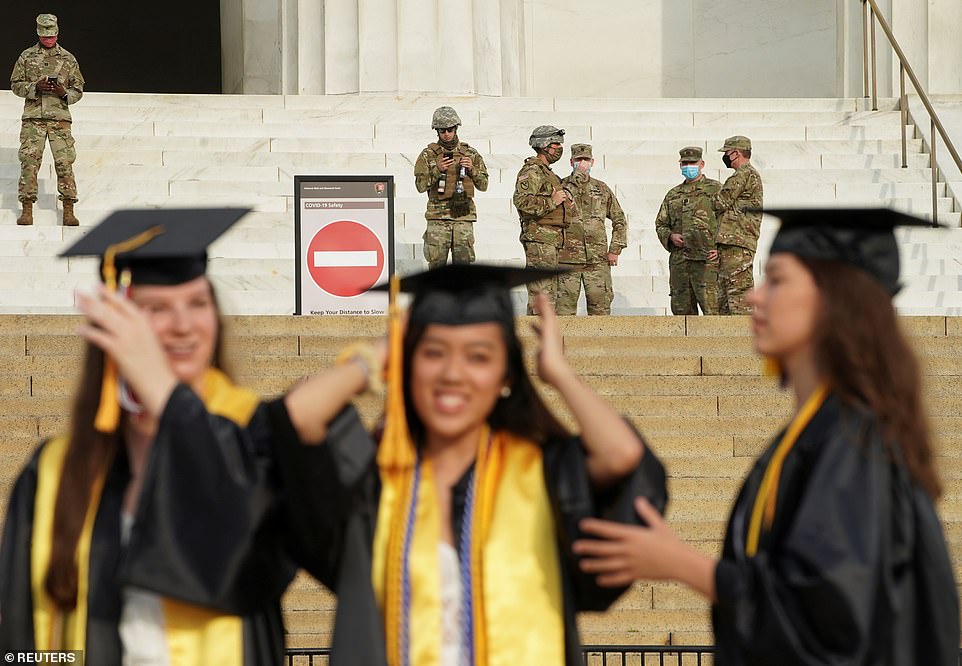 The Lincoln Memorial is a traditional spot for graduation photos for students from the DC area, including these students 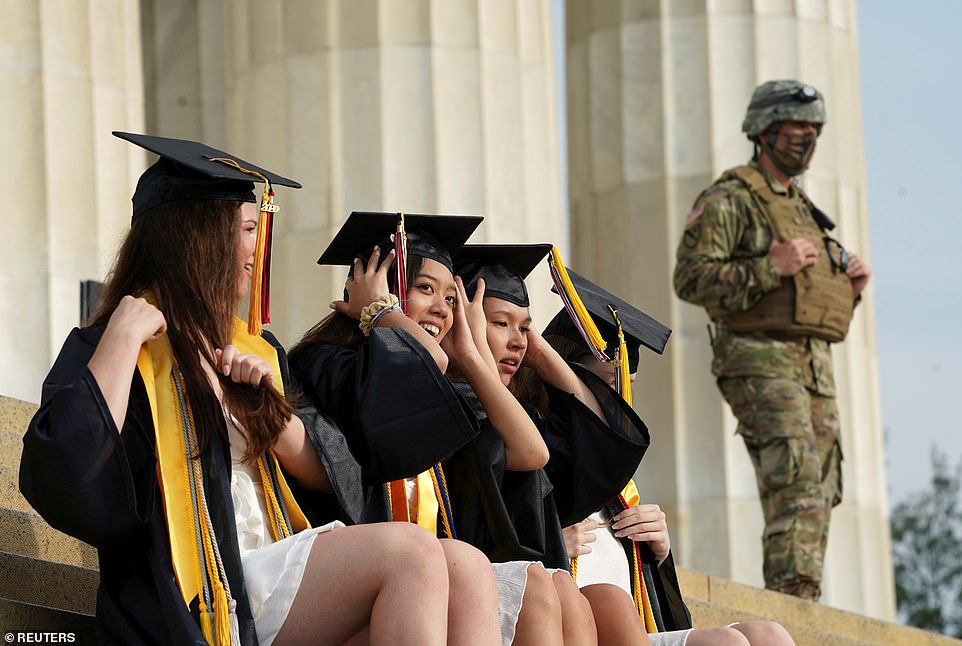 The group of girls traveled from Vienna, Virginia for the photo tradition in Washington DC, laughing and joking at the landmark

The students have recently graduated from the James Madison High School in Vienna, Virginia.

Next week the students will be able to have their graduation portraits taken, with a photographer coming to the campus for a session with all students who would like the photo.

Some of the students did not want to wait for the official session.

Students from Woodbridge High School also joined in the fun on Friday, striking poses next to the National Parks sign on the monument.

One of the National Guard troops stationed nearby could be seen grinning as Ava Pumpelly and Emily Hund larked around in their white gowns, pulling faces and pouting for the camera.

Their traditional graduation had been canceled, in line with schools across the country.

Virtual commencement speeches have replaced the usual addresses, and have been watched online by millions of people.

Barack and Michelle Obama, Meghan Markle, Oprah and Ellen DeGeneres are among those to speak to the class of 2020. 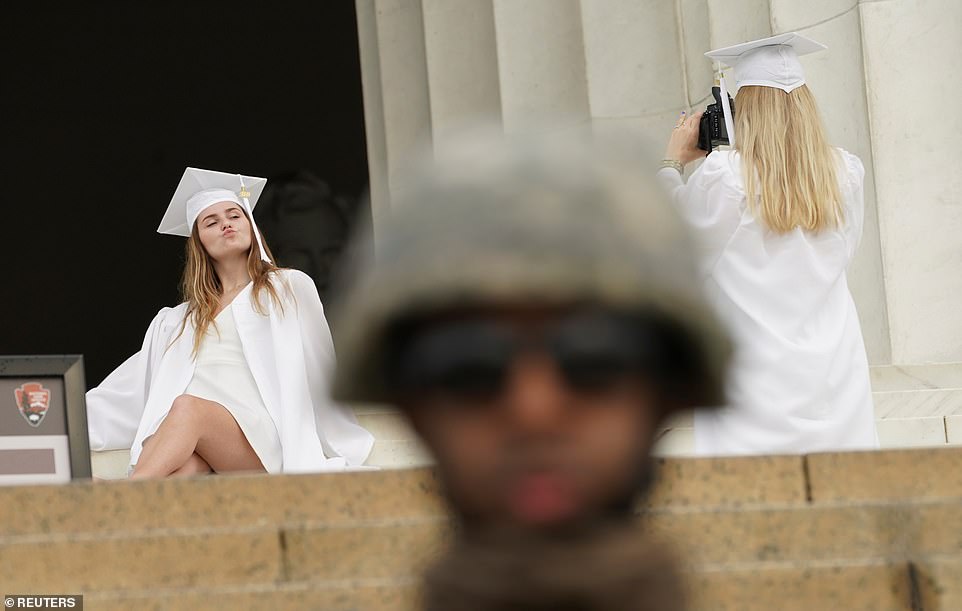 Emily Hund and Ava Pumpelly, from Woodbridge Senior High School, strike a pose at the Lincoln Memorial on Friday 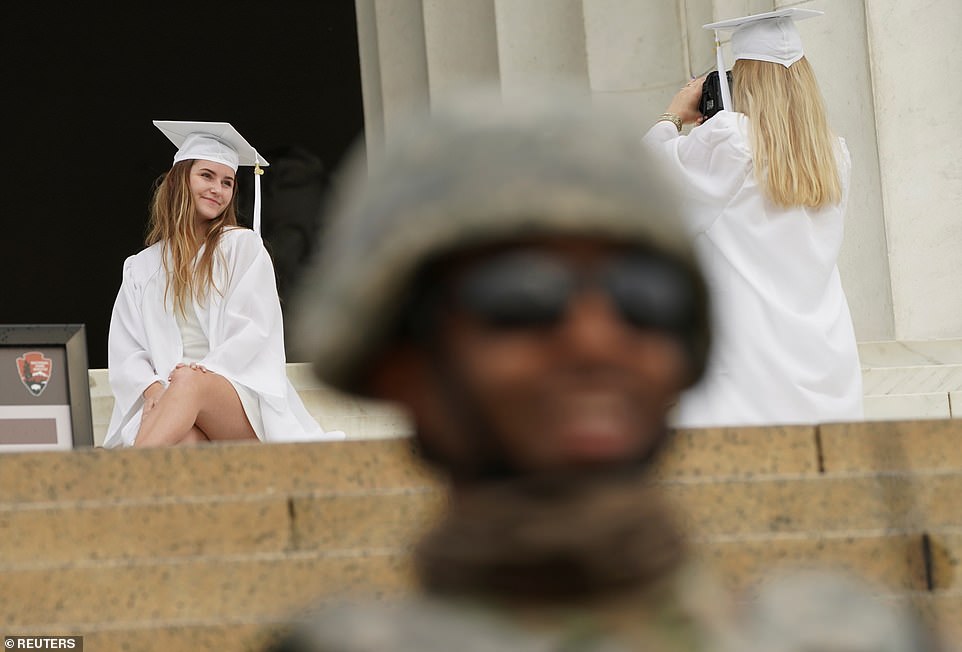 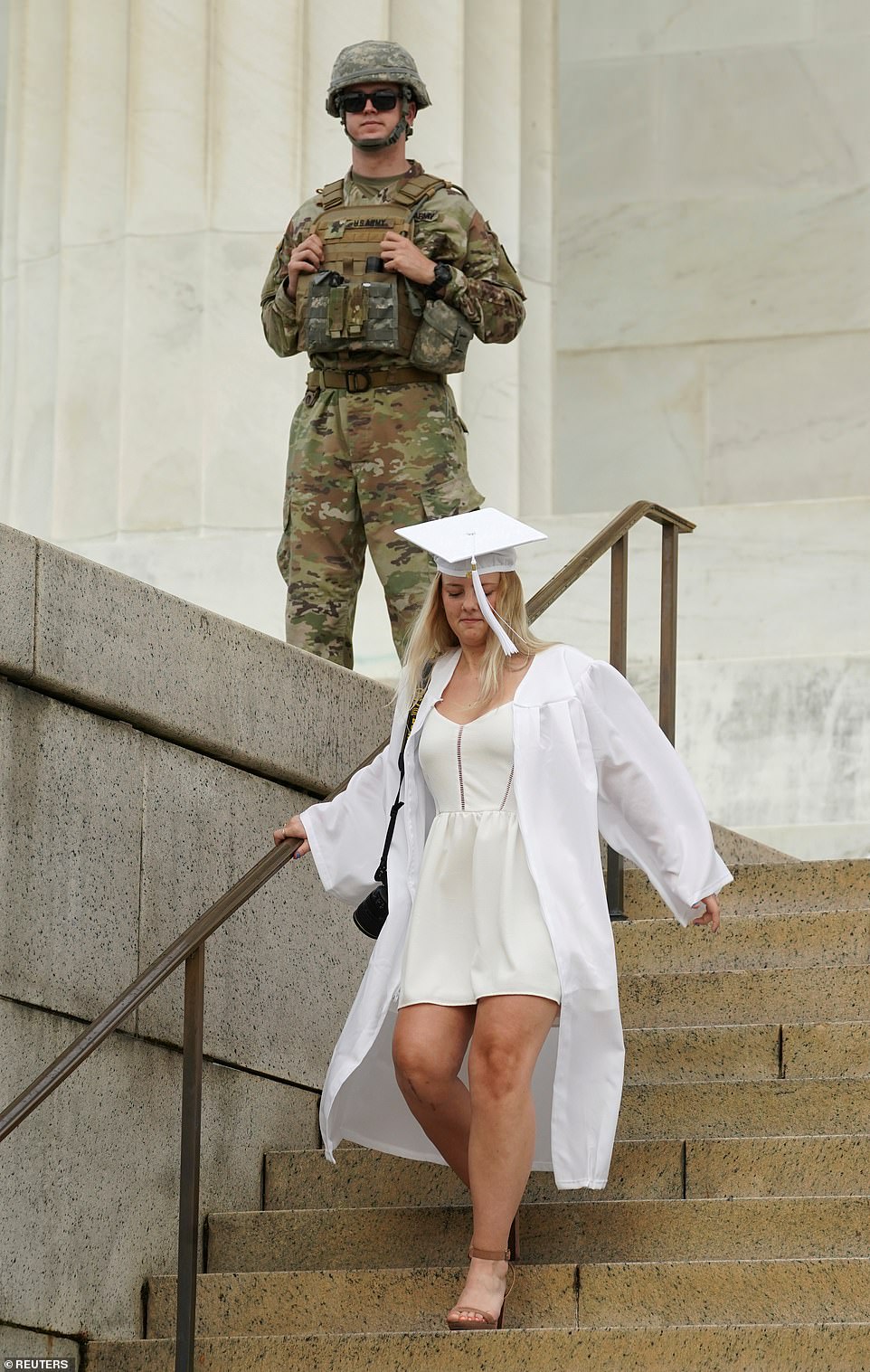 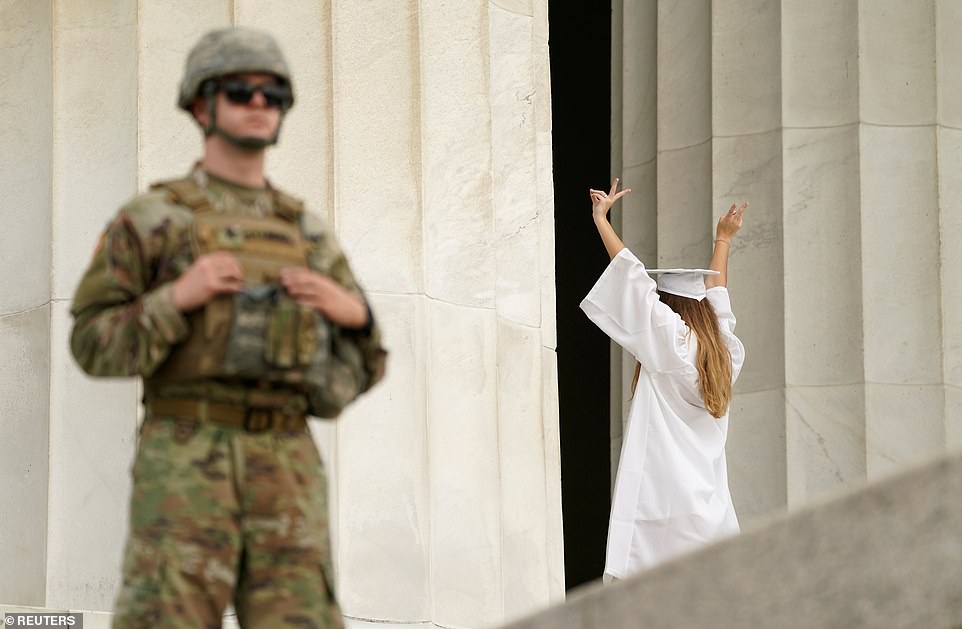 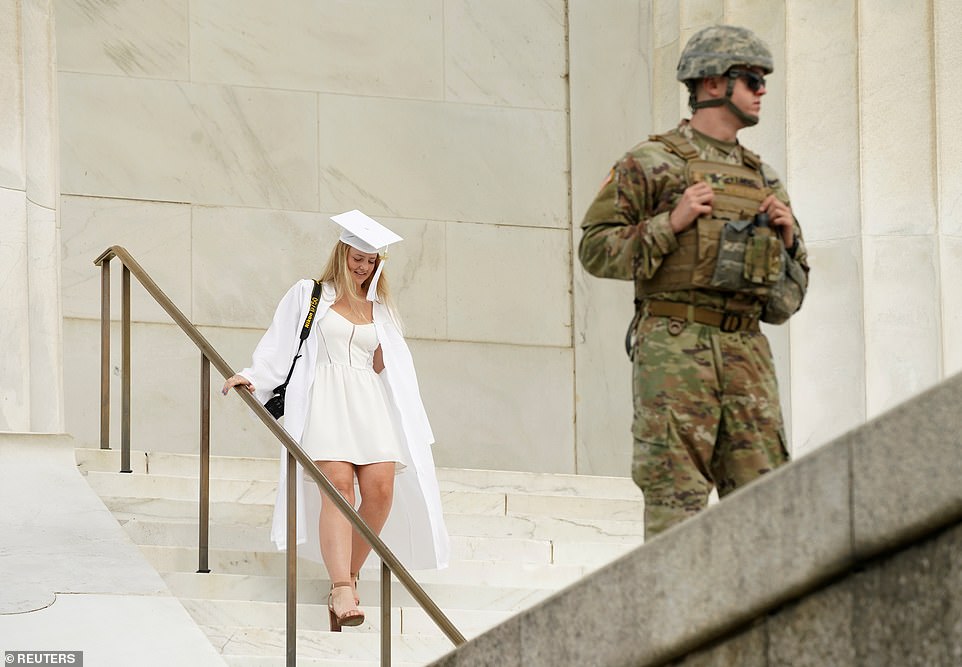 The guards maintained their focus, despite the high jinks taking place behind them. DC was under curfew early this week 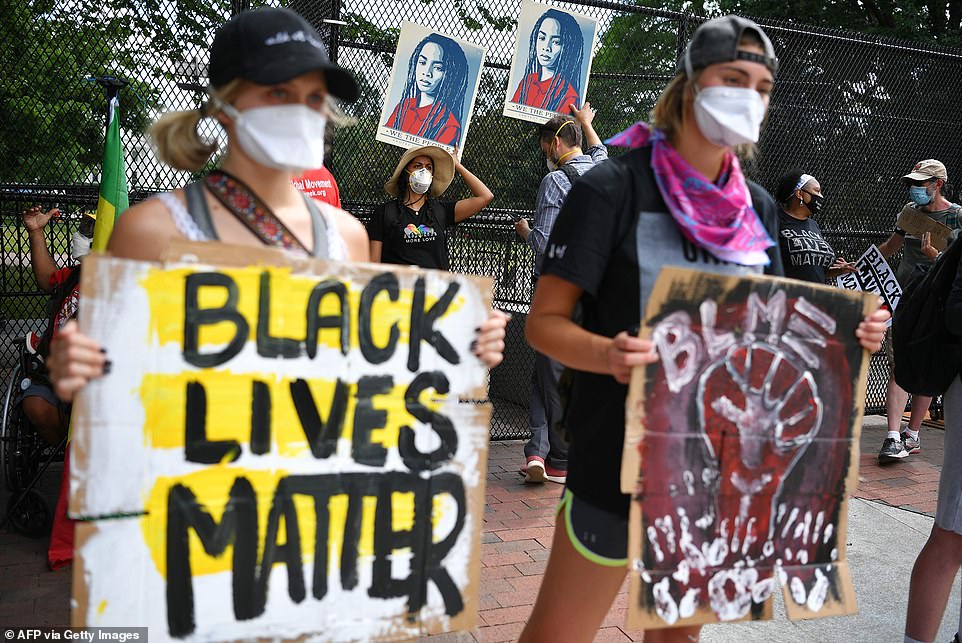 Protests in Washington DC on Friday. The city was placed under curfew on Monday, Tuesday and Wednesday to quell unrest 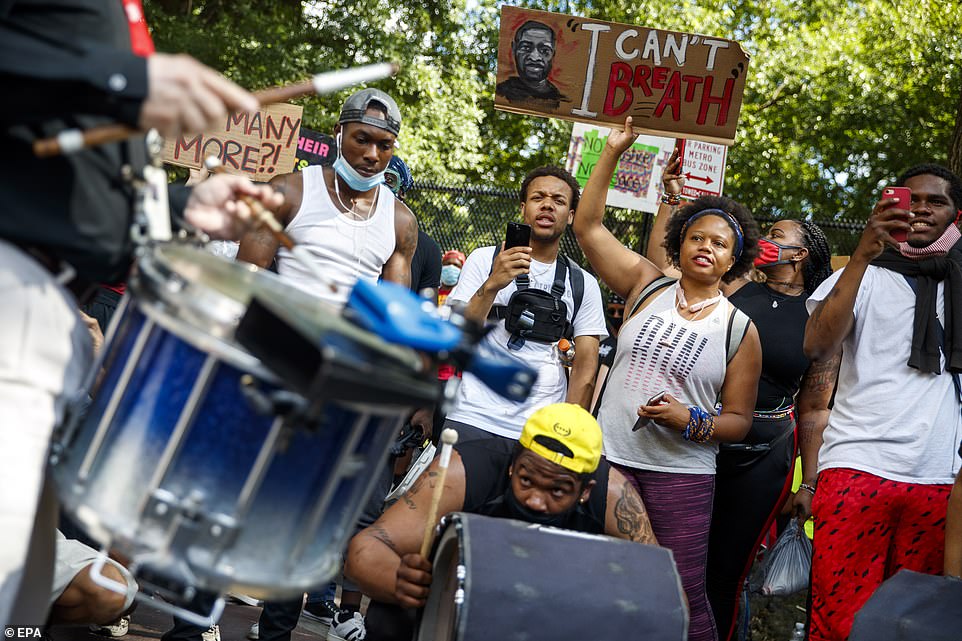 Protests have continued in the city for over a week now, sparked by the May 25 killing of George Floyd in Minneapolis