An unlikely food war has broken out in a quaint English town after vegan vandals targeted a fish restaurant.

Locals have expressed their bemusement after a spate of vandalism that appears to support the veganism movement in Farnham, Surrey.

Vandals took a permanent marker pen to the sign of the town’s Loch Fyne seafood restaurant in Downing Street prompting a furious written response on an electricity box in the disagreement that has raised eyebrows at the local council.

The first instance of vandalism was sparked after and unknown person hit out at pescatarians scrawling ‘fish feel pain’ on the restaurant’s sign accompanied by a sticker reading ‘veganism is not a diet’.

That questionable move then prompted a response from another local who scrawled criticism on an electricity box outside South Farnham Primary School in Menin Way.

‘It makes you appear more idiotic than me.’

The message was signed off with,

The first message was spotted by Loch Fyne restaurant employee Charlie Kirk at 6.30am on Monday morning while he walked to work.

When asked if there was any particular reason for the unreasonable outbreak of hostility, Mr Kirk said: 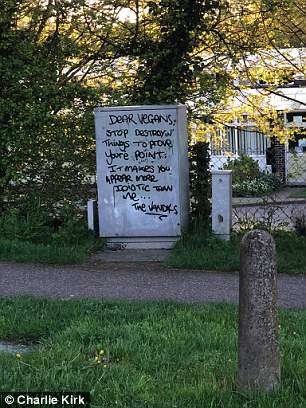 ‘Not that I know but I believe the first ones for graffiti were some group of vegans, I work for Loch Fyne in Farnham and they have graffitied our sign at the back of our restaurant for no apparentreason at all.

‘I don’t think it’s in retaliation, I think people are probably generally quite sick of hearing about vegan this, vegan that, just get on with it and stop trying to force vegan or meat eating down people’s throats, no pun intended.

‘I had a chuckle to myself, it’s quite funny that people are graffitiing things to do with people’s dietary choices, it’s a very strange choice of art!’

Farnham Town Council has been made aware of the graffiti and has said that it will put it on its list for removal.

According to Loch Fyne general manager Clare Cheeseman, the vandalism first appeared at their restaurant a few weeks ago and will mean they have to replace the sign it was written on.

Ms Cheeseman said: ‘I believe the graffiti is still there. It’s been done in permanent marker so we now need to replace the sign.

‘It has been there for a couple of weeks. It was probably just someone having a bit of fun or making a point. Obviously they shouldn’t be vandalising our signs.

‘We have nothing against vegans, in fact we are introducing a new vegan menu this week.’