Lindsey Graham said Sunday that the FBI ‘misled’ the Senate Intelligence Committee during a March 2018 briefing where they bolstered up the reliability of the infamous Steele Dossier even though the primary sub-source said most of the information is ‘hearsay.’

New redacted documents released Sunday by the Senate Judiciary Committee, of which Graham is chairman, reveal that the primary sub-source of the dossier told the FBI that all the information included came from ‘word of mouth and hearsay.’

This runs contrary to what the FBI represented to the panel during the 2018 briefing, when the committee was told there was no reason to doubt the dossier

‘And they did to the Senate Intel Committee what they did to the FISA court,’ the South Carolina Republican said in reference to the FBI’s briefing to his colleagues. ‘They misled the hell out of them.’

‘They said there’s no evidence from the sub-source to suggest that Steele fabricated anything in the dossier,’ Graham, a Trump ally, continued. 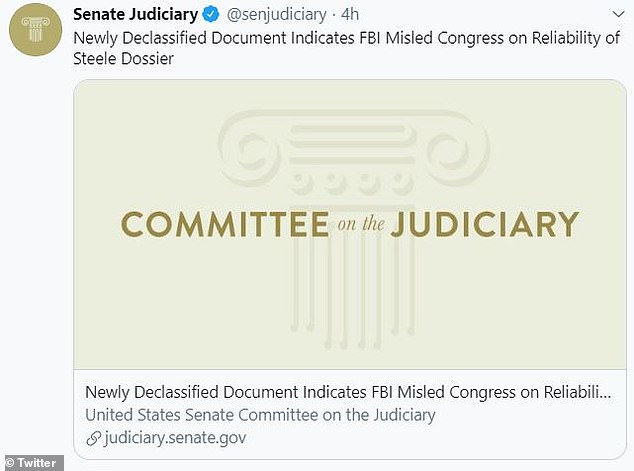 Newly revealed documents from the Senate Judiciary Committee show, however, that the sub-source admitted a lot of the information included in the dossier was ‘hearsay,’ ‘word of mouth’ or was ‘jest’ comments made ‘over beers’ 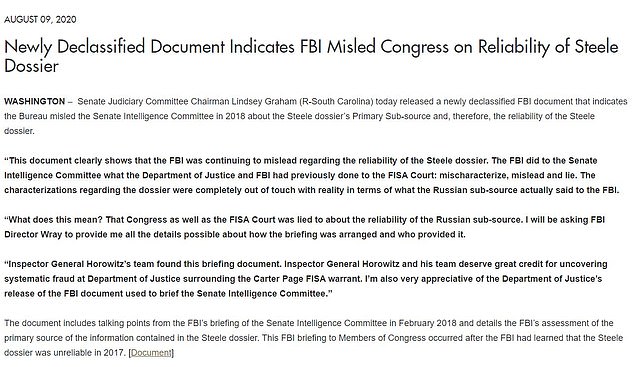 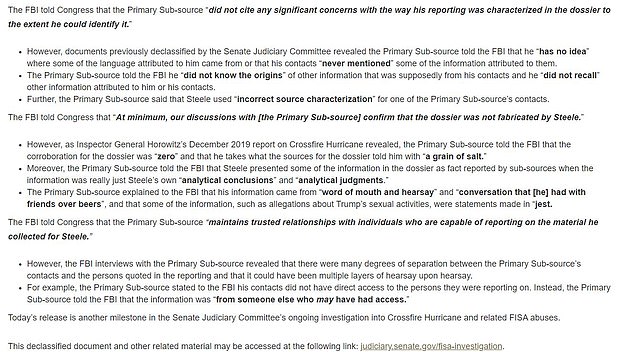 This was contrary to what the FBI told the committee in the spring of 2018, when they were told that the primary sub-source ‘maintains trusted relationships with individuals who are capable of reporting on the material he collected for Steele.’

The redacted documents also bring doubt over the ‘golden showers’ aspect of the dossier.

The dossier claimed that the president was being blackmailed by Russia because Moscow had video proof of an alleged incident where Trump apparently watched prostitutes pee on a hotel bed in Moscow while he was there for the Miss Universe Pageant in 2013.

The sub-source revealed to the FBI, the newly released document shows, that much of the conversation he had were ‘with friends over beers.’

The individual also claimed some of the information, including allegations about Trump’s sexual activities, were comments made in ‘jest.’

Despite the primary sub-source telling the FBI that Christopher Steele – the former British spy and author of the dossier that contributed to the launch of the Russia probe – made claims based on his own ‘analytical conclusions’ and ‘judgements,’ the FBI still told the Intelligence Committee the dossier was ‘reliable.’

The Steele Dossier was a pivotal document in the Foreign Intelligence Surveillance Act (FISA) court ordering warrants for former Trump aide Carter Page as part of the larger investigation.