Grand Designs viewers were left ‘angry’ and ‘sickened’ when a 200-year-old former blacking mill had to be bulldozed for safety reasons – along with the old trees surrounding it.

In last night’s episode of the Channel 4 show, super optimistic young Cumbrian couple Rob, 31, and Ruth, 27, explained how they hoped to transform the ancient building on the verge of collapse – which they purchased for £110,000 – in just 18 months and with a £250,000 budget.

While most of us would shudder at the thought of transforming a crumbling, structurally unsound ruin into a home, especially doing it yourself and on an extremely tight budget, the adventurous duo were up for the challenge.

But although they told how they planned to preserve the ruined shell of the building they had fallen in love with and build a modern timber home within the perimeter, it had been made a scheduled ancient monument by Historic England, meaning that any modifications required consent from the secretary of state.

And it wasn’t long before the duo faced their first hurdles, with the couple choosing to bulldoze the building when it was deemed ‘too dangerous and fragile to repair’, while they paid a tree surgeon £20,000 to chop down trees up the hill from the building site – leaving viewers raging.

‘Ya we loved the ruin and the trees so we thought let’s demolish the lot. Sickening,’ wrote one, while a second commented: ‘The finished house looks f****** awful. I have been amused, irritated, emotional, joyful, saddened, inspired, and many other things over the years of #granddesigns, but I have never been so angry as I am watching this episode.’ 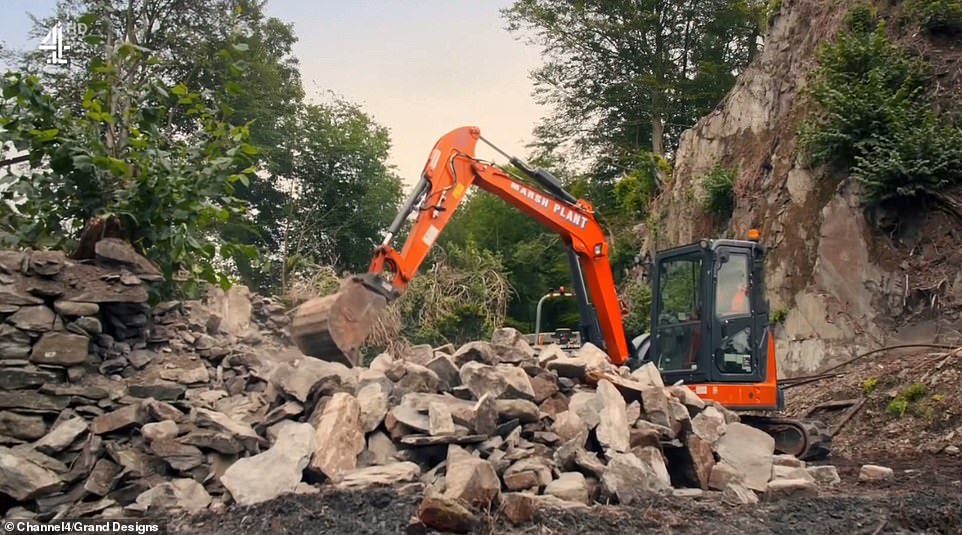 However, the couple were slammed by viewers when the ancient building had to be bulldozed for safety reasons (pictured, after) – along with the old trees surrounding it 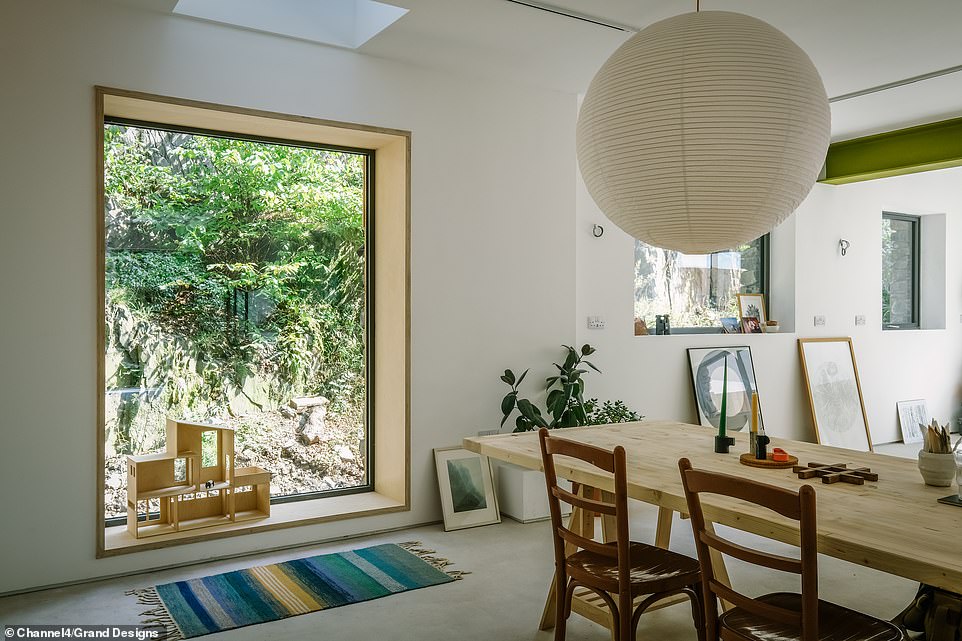 The 200-year-old former Blacking Mill was made a scheduled ancient monument by Historic England, meaning that any modifications required consent from the secretary of state. Pictured, the dining area after the impressive transformation 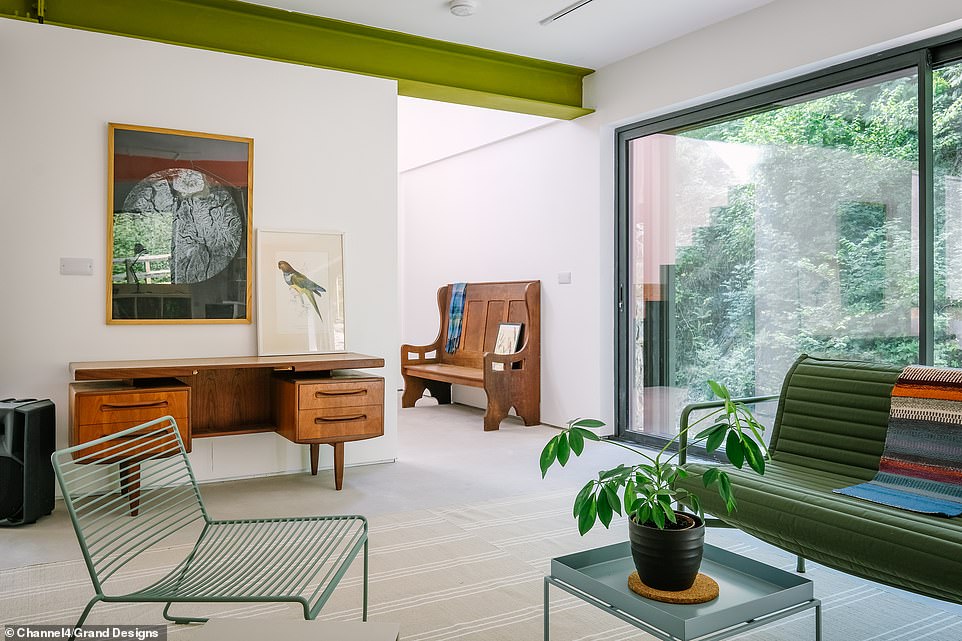 The couple hoped to complete the epic, complicated restoration and new build hybrid in 18 months, with just £250,000. Pictured, the living area after the transformation 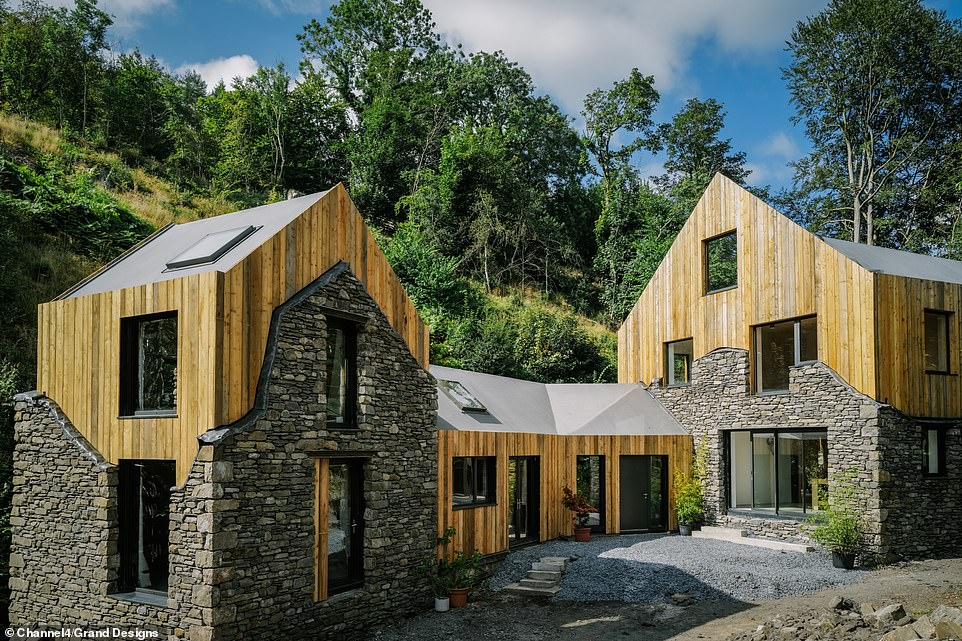 Over 200 years, the building (pictured, after the transformation) had a variety of uses – as a water mill, a blacking mill producing charcoaled dust for iron forges and finally, a pig sty

The couple’s bold vision was to conserve as much of the original structure as possible and within the walls slot in an entirely new timber clad, sharp-edged modern building – giving the impression that it was peeping out from the original craggy mill ruins.

They hoped to complete the epic, complicated restoration and new build hybrid in 18 months, with just £250,000.

‘I found it and have been obsessed with it for the last seven years. It’s almost like a bit of a magical place,’ said Rob, to which Ruth added: ‘Rob took me here the first time I came to meet his parents. I fell in love with it. It’s the perfect location with a river running through it and a lot of green trees.’

Over the last 200 years, the building had a variety of uses – as a water mill, a blacking mill producing charcoaled dust for iron forges and finally, a pig sty.

Speaking to presenter Kevin McCloud about how they explain the project to people who have never been there, Rob said: ‘It’s a derelict wreck that we’re plonking a lovely new contemporary style building inside that’s going to be half house and then half a workshop and office.’ 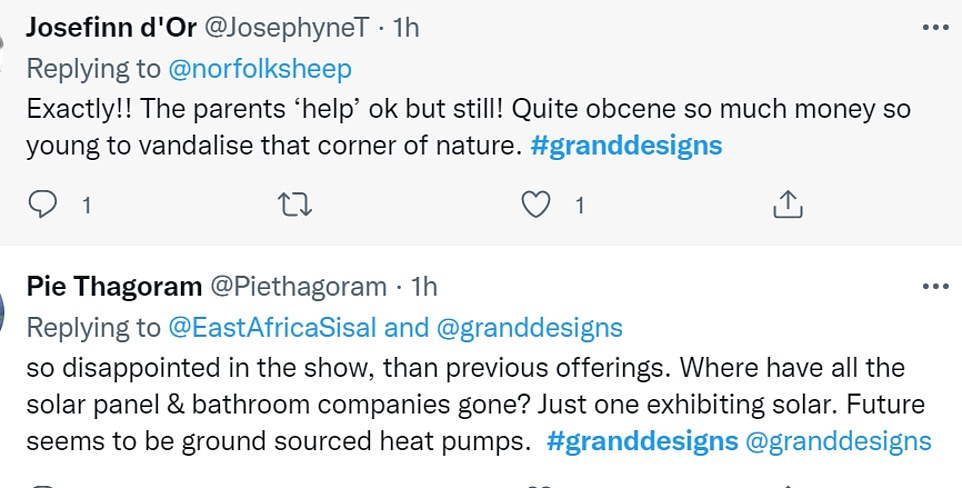 Those who tuned in were left raging, with one writing: ‘Ya we loved the ruin and the trees so we thought let’s demolish the lot. Sickening’ (pictured)

Within the existing walls, Rob and Ruth hoped to avoid trashing the place by conserving the dilapidated characterful mill buildings as they were – and hoped to slot in an entirely new timber frame structure – as though the new was growing out of the old.

‘First, because these are protected buildings at risk of imminent collapse, they need to be made structurally sound,’ explained Kevin. ‘A job fraught with difficulty and some danger.’

‘If this first conservation phase is a success, Rob and Ruth will lay new building foundations inside the old structures, and slot new insulated fiber frames within them – all capped off with a fibreglass roof.’

He continued: ‘The south building is to be a workshop and architecture studio. The larger north building will become the centrepiece of this project – a 250 square metre, two-storey home. 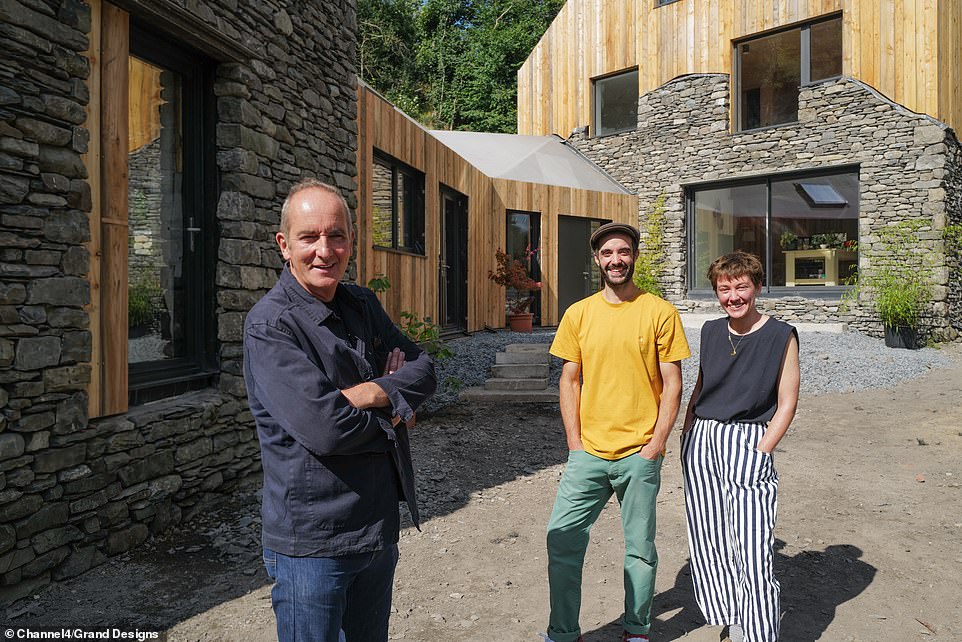 The couple (pictured, with Kevin McCloud) left viewers raging when they chose to bulldoze the building after it was deemed unsafe, while they paid a tree surgeon £20,000 to chop down trees up the hill from the building site 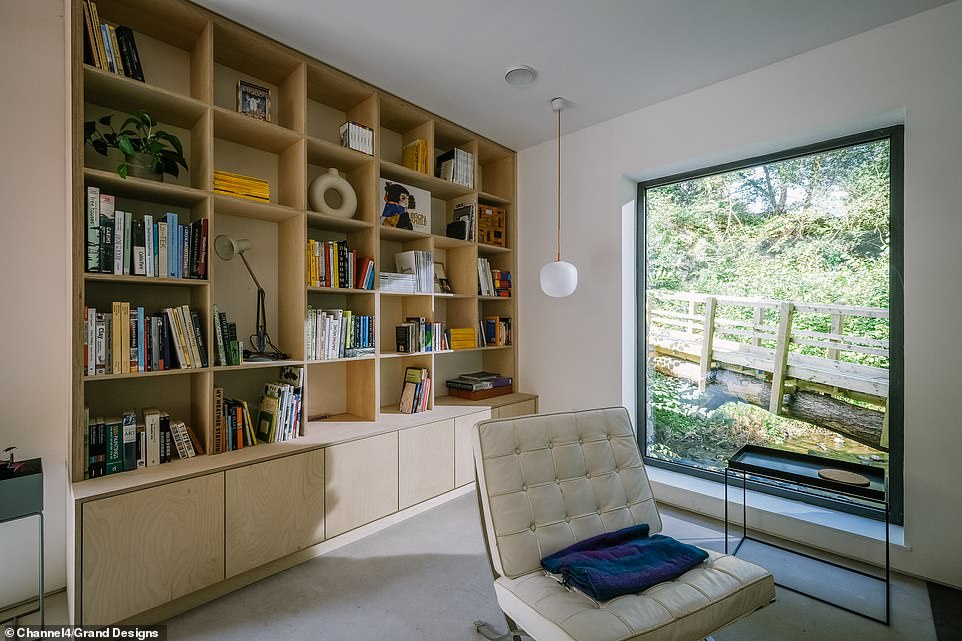 Rob described the project as a ‘derelict wreck that we’re plonking a lovely new contemporary style building inside that’s going to be half house and then half a workshop and office.’ Pictured, the study area 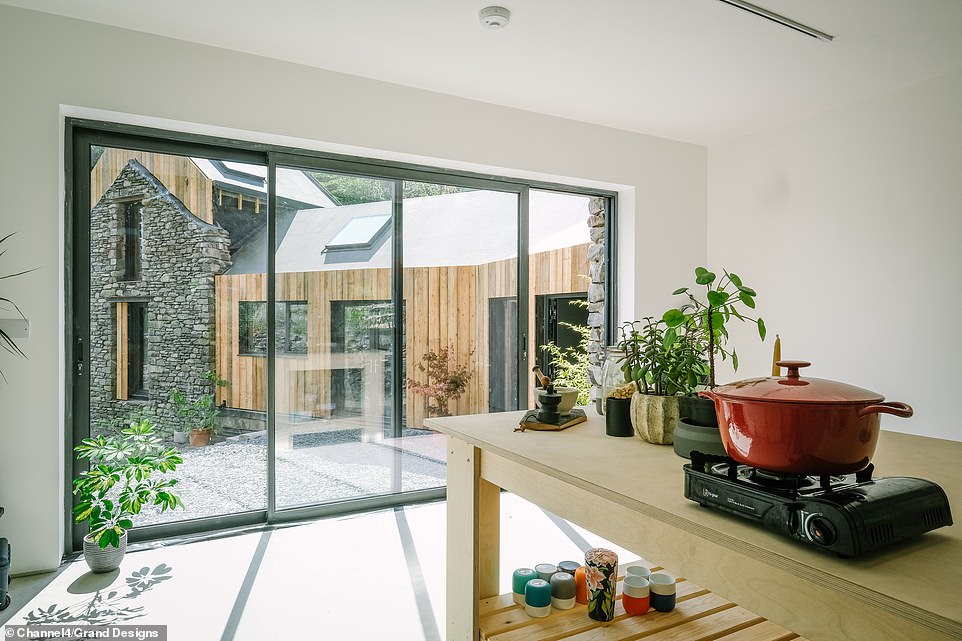 Kevin McCloud praised how nothing gets in the way of the spectacular views, adding it’s like ‘standing inside a gallery.’ Pictured, view from the kitchen

Kevin went on to describe how the ground floor will contain a large open-plan kitchen-dining room and living room, with a very large seven-metre wide window that’ll visually connect the building to the beautiful river valley that is just outside.

‘There will also be a more private snug with a woodburner,’ he added.

Meanwhile, upstairs, he noted there will be a bedroom for Ruth and Rob, along with three further rooms.

‘Above that will sit a roof terrace with food growing, a dining table, plenty of seating and a pizza oven,’ he continued.

But the couple’s optimism was tested to the limit straight away when Historic England tell them the Blacking Mill was too dangerous to repair.

Suddenly pitched into Plan B, Rob and Ruth were required to painstakingly re-build the ancient mill-buildings around their new timber-frame structure – and opted to cut down the surrounding trees to do so.

‘The tree surgery was unsuccessful. None of the trees survived,’ raged one, while a second commented: ‘Ya we loved the ruin and the trees so we thought let’s demolish the lot. Sickening #granddesigns,’ blasted a second fan of the show.’ 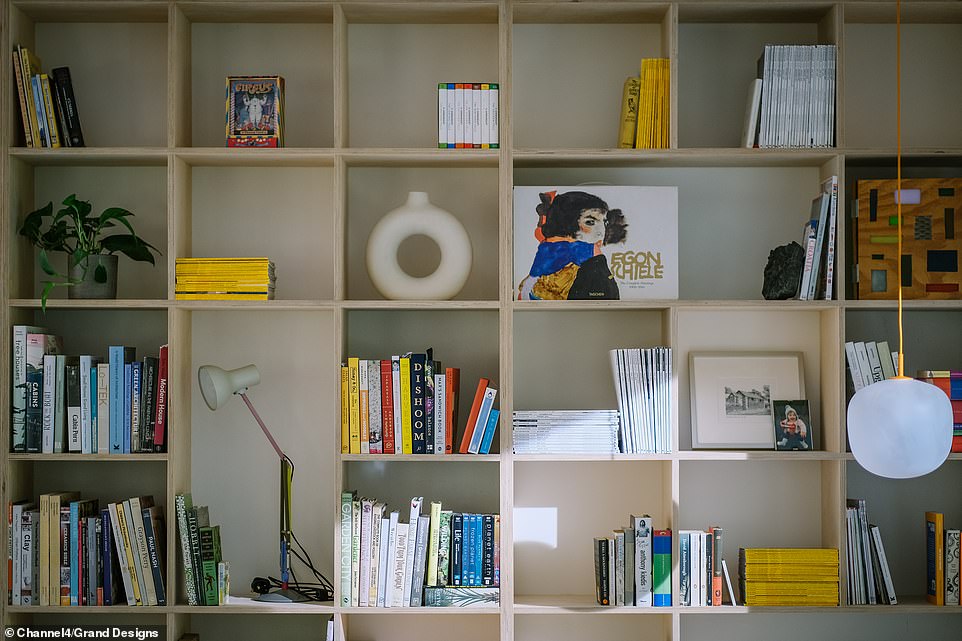 The couple set about keeping the ruin’s original atmospheric magic while giving the building a modern update. Pictured, the study 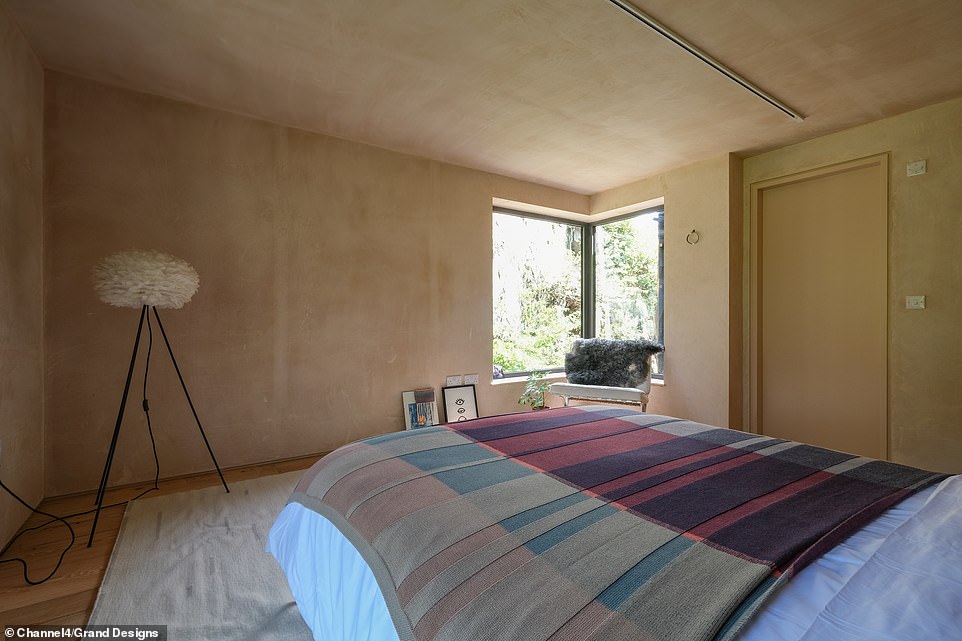 Upstairs includes a bedroom for Ruth and Rob (pictured, after the transformation) along with three further rooms 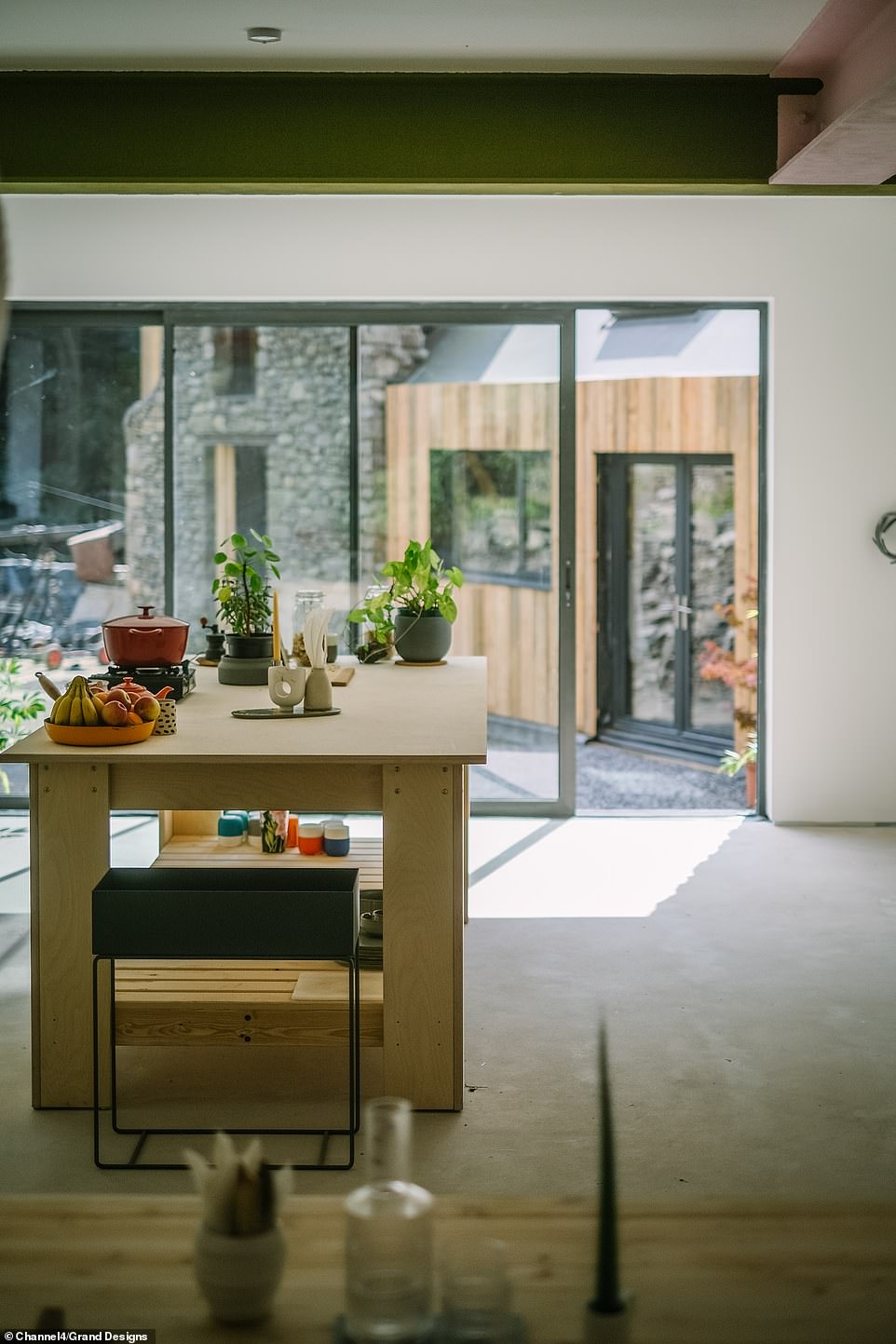 During the show, the couple’s optimism was tested to the limit straight away when Historic England told them the blacking mill was too dangerous to repair. Pictured, the kitchen

A third added: ”This is going to be a disaster. ‘Half an hour in and they haven’t even started building anything. Never a good sign….’

Elsewhere, a fourth commented: ‘The parents “help” ok but still! Quite obscene so much money so young to vandalise that corner of nature.

Short of money, trying to do as much as they could themselves and faced by a series of setbacks, the project dragged inexorably on.

And by the time Kevin McCloud checked on the couple’s progress, it was almost three years on from when they started the bonkers scheme – with the entire project taking a whopping three and a half years in total.

‘Wow, that is the set for the Game of Thrones,’ he said. ‘I mean that in a really, really complementary way – it’s brilliant.’

Speaking to the couple, he joked: ‘Look at you both – you’re like building goblins. You’ve really grown to be a part of this place. Look at the pair of you – you’re slowly turning the same colour as the entire valley.’

Commenting on the finished project, he added: ‘There are some moments of delight – like the returns on the cladding on those timber windows up there and the sharpness of the profile of the gable. And actually, the stonework itself, exquisitely done and expertly crafted.’

Delighted with how the project turned out, Ruth gushed: ‘It’s so good, we’re very proud of it.’

Rob added: ‘I think it’s a new interpretation of what was here. If you rebuild a wall even using the existing stone it’s always going to look new, but then we’ve kind of copied the shape of what it was and tried to show what was here.’

Taking a look inside, Kevin McCloud seemed impressed and enthused: ‘I love what you’ve with the beams… isn’t it exciting this building?’