A grandfather has died saving the life of his 13-year-old grandson by cocooning him in his arms inside their jeep as it rolled 150ft down a New Mexico mountain.

Gerard Greenough, 63, and his grandson Austyn Kerley were driving on a mountain in Red River when their vehicle got stuck earlier this month.

They were in one car while Austyin’s twin brother was in another with their father Tony.  The group had spent the night camping and were on their way back down the mountain when Gerard got stuck.

Greenough tried to free the car but flooring the gas but the rocks beneath its wheels came loose and sent them over the edge.

As they fell, he wrapped his arms around Austyn and cocooned him to soften the blows as their car crashed down and down. 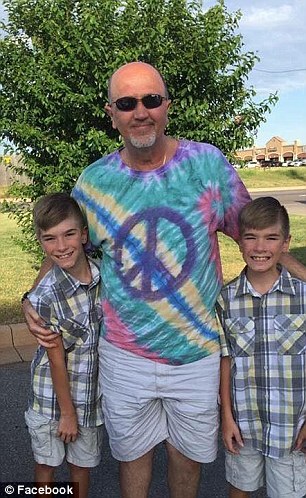 Austyn Kerley (left in hospital after the accident) lived because his grandfather Gerard Greenough, 63, (right with Austyn and his brother) cocooned him when their keep fell 150 ft. It cushioned Austyin’s fall but Gerard died

Eventually, they came to a stop 150ft from where they had been.

The boy’s father and brother watched the horror unfold and were able to reach him and pull him back up the mountain but Gerard was lifeless.

Tony, his father, repelled down the mountain and hoisted the boy back up while his other 13-year-old son assisted him at the top.

An off-duty paramedic was nearby at the time and slid down the mountain to get to Gerard.

He performed CPR for 20 minutes the grandfather never regained consciousness.

Austyn spent weeks in the hospital in a neck brace.

He suffered major blood loss, a lacerated pancreas and liver, broken clavicles and spinal fractures in his neck and back.

The 13-year-old was released from hospital recently and is now recovering at home in Oklahoma.

His mother Amanda has been sharing his progress on Facebook. 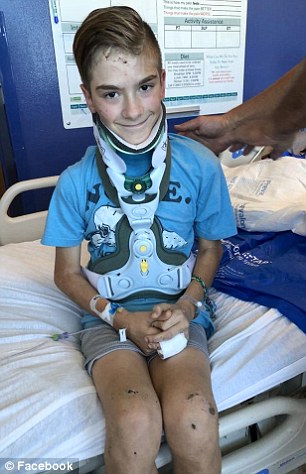 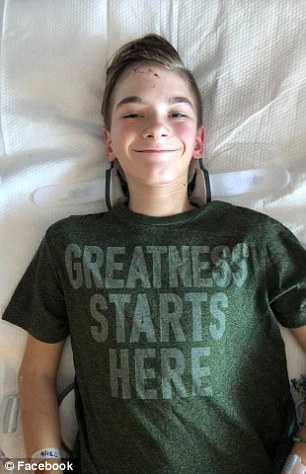 Austyn suffered fractures to his spine and skull and he experienced severe blood loss. He has been recovering for the last several weeks in hospital and is now back at home

She thanked her ‘sweet daddy’ for saving her son’s life and said he was ‘proud’ to be his daughter.

Her happiness at watching her son recover is pierced by the grief of her loss of her father, she said. 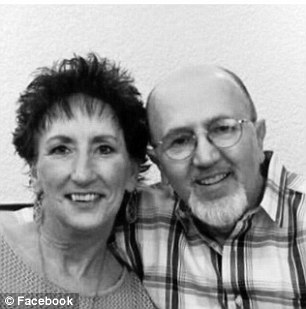 Greenough, pictured with his wife, was unconscious when EMTs arrived. They performed CPR for 20 minutes but he did not regain consciousness

When Austyn was finally able to walk again with help, Amanda wanted to text her father to show him. She said the painful reality of his death sank in in that moment.

‘The moment Austyn stood up and took a few assisted steps today.

‘I immediately thought “oh I got to text daddy and show him, he is gonna be so excited!”

Amanda said her father ‘loved’ the mountains and was thrilled his grandsons were with him for the trip.

‘There’s no words. He loved the mountains and he loved doing that with Tony. It was their thing.

‘This year he was beside himself with joy that his two grandsons were coming with him.

‘He loved them deeply! He loved us all deeply and with great passion. His family was his happiness. And it hurts to know he’s gone,’ she said.

She also told ABC it was a ‘miracle’ he recovered after going into respiratory failure in the back of the ambulance. 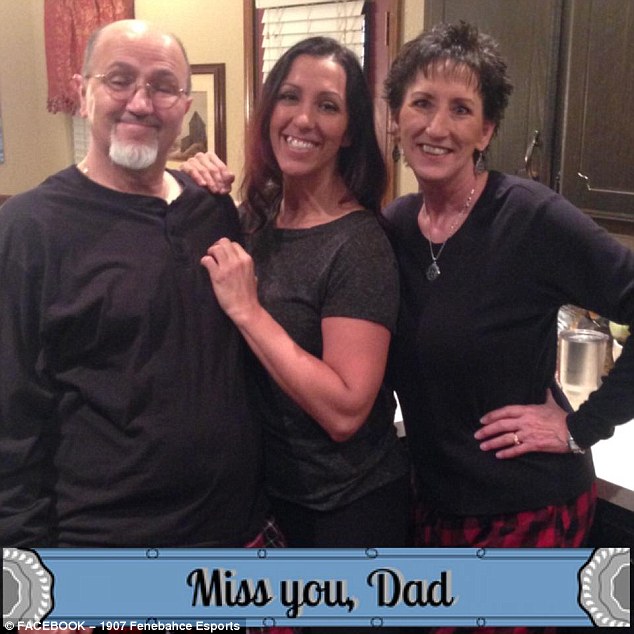 Amanda Kerley, Austyn’s mother, is pictured with her father and mother. She said her ‘sweet daddy’ was thrilled to be in the mountains with his grandsons when he died