Grandfather, 68, died three weeks after hospital medics flushed his lungs out with DETERGENT

A grandfather’s lungs were accidentally washed out with diluted cleaning detergent, used to sterilise equipment, instead of saline, a shocking report has revealed.

William Hannah died several days later, but it is not yet known if the botched procedure played a part in his death.

The 68-year-old, from Bolton, was admitted to Salford Royal Hospital after being hit by a car in September last year. He had suffered serious injuries, including a traumatic brain injury, as well as multiple fractures.

Despite treatment, his condition continued to deteriorate and he was moved to the hospital’s Critical Care Unit and placed on a ventilator.

Doctors decided to carryout an emergency procedure to try and clear his lungs and improve his breathing.

But the trolley containing the bronchoscopy equipment had not been stocked up ahead of the procedure, a hospital investigation found.

William Hannah, 68, had his lungs accidentally washed out with cleaning detergent at Salford Royal Hospital

A member of nursing staff was asked by the consultant to get some saline so the bronchial lavage – which sees a small amount of fluid put into the lungs before being removed – could go ahead.

However, due to an error in communication and mislabeling of bottles, the doctor was handed a detergent mixture – used for cleaning equipment – instead, which was then used to wash out Mr Hannah’s lungs.

According to an internal investigation report by Salford Royal Hospital, carried out in the weeks after the grandad-of-three’s death, when the mistake was discovered, a second, ‘thorough washout of the right lung’ was carried out.

Over the next 33 hours, Mr Hannah’s condition continued to worsen and he began to show symptoms of sepsis and cardiovascular collapse.

Further testing is currently underway to find out whether the error contributed to Mr Hannah’s death.

An investigation is also being carried out by a coroner, with an inquest due to take place in February.

It read: ‘Following investigation it was determined that the inadvertent instillation of the incorrect fluid into the patient’s lungs was caused by a number of human factors. 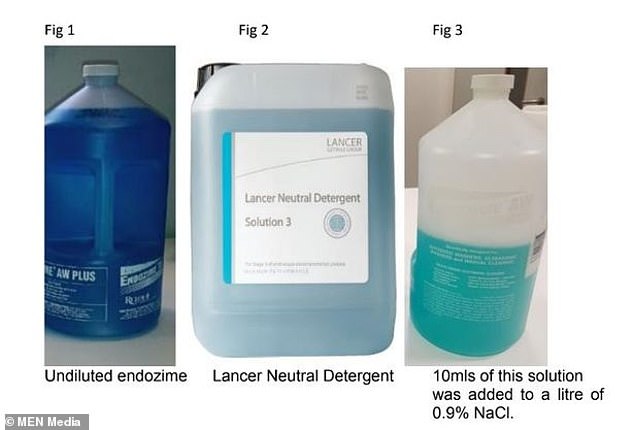 ‘These factors include – un-stocked trolley; distraction by other life critical tasks; lack of clear two-way communication; no labelling of bottle; inadequate staff training; and lack of COSHH risk assessment.

‘The clinical impact of the errors on the patient is unknown at this point therefore we have requested an independent toxicology report to support the pathology results and coronial inquest.’

Mr Hannah’s loved ones said they were ‘shocked and angry’ and felt as though he had been let down.

They have instructed law firm JMW to investigate further.

Mr Hannah’s daughter Lisa, 44, from Whitefield, said: ‘This was an appalling and unbelievable mistake.’

Eddie Jones, head of clinical negligence at law firm JMW, added: ‘This incident has been very traumatic for William’s family who have not only had to deal with his death but also these appalling circumstances.

‘Their grief has been compounded by this terrible error and they understandably would like to know how something so shocking and avoidable could occur.’ 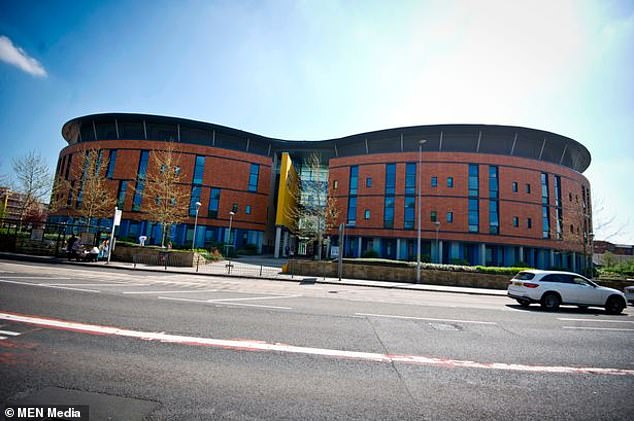 He added: ‘We once again offer our deepest sympathies to William Hannah’s family for the loss of their much-loved family member.

‘We have carried out a comprehensive investigation examining thoroughly the care Mr Hannah received. We have since shared this information with his family.

‘The review of Mr Hannah’s care at Salford Royal highlighted that he did not receive the high standard of care we always pride ourselves on delivering and we apologise unreservedly to his family for this.

‘We have since introduced new measures to ensure something like this will not happen again.

‘We continue to work with the coroner to determine whether any failings by the trust caused or contributed to Mr Hannah’s death. The coroner will hear the inquest into his death next year.’