Grandfather, 80 vows he will go to jail rather than pay £160 fine after parking his Land Rover Defender ‘just over the line’ in a multi-storey car park

A grandfather facing a £158 fine for parking ‘slightly over the line’ at a shopping centre has said he’d rather go to prison than pay the fine.

Roger Murray, 89, says he was given the fine at the Grosvenor multi-storey in Macclesfield, Cheshire after parking his Land Rover Defender in a bay that was ‘too small’.

He was initially charged £50 for the alleged offence in May, but he refused to pay the fine – saying it was for a ‘trivial offence’ so now the amount owed has increased to £158.

Mr Murray could now face bailiffs’ at his home, after East Cheshire Council refused to waive the fine saying his vehicle had ‘prevented other drivers using the neighbouring parking space’.

Roger Murray (pictured), 89, says he was given the fine at the Grosvenor multi-storey in Macclesfield, Cheshire after parking his Land Rover Defender in a bay that was ‘too small’

The grandfather, from Adlington – who has two daughters and two grandchildren – said: ‘I dare not leave home now as they could turn up at any time. It’s frightening.

‘I probably should have paid the fine but for a trivial offence of untidy parking this is over the top.

‘The council is partly at fault as their allocated spaces are to much too small.

‘The old Defender is not a big vehicle in this day and age, tall maybe, but not as wide as today’s SUVs.

‘I am so incensed, the council should show more compassion. I’ll get the barricades up and wait for them, I’d rather go to prison than pay the fine, it’s totally wrong.’

Mr Murray, who received his ticket in May, even returned to the parking space and took a picture of his Land Rover in it to prove the bay was too small.

He has shared his story on Facebook, where it has attracted hundreds of supportive comments.

Upon refusing Mr Murray’s appeal and the fine not being paid, Cheshire East Council passed the matter on to bailiffs. 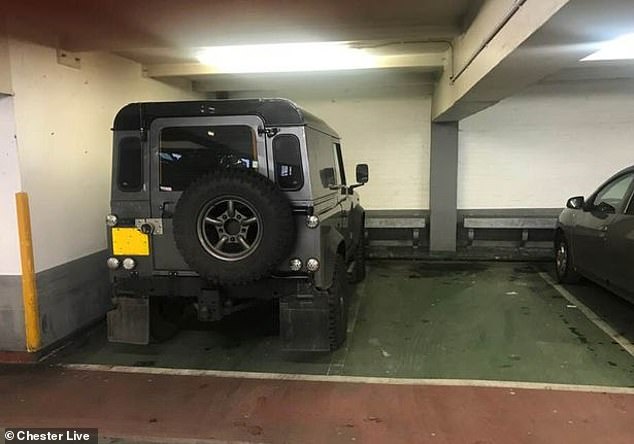 Roger, who received his ticket in May, even returned to the parking space and took a picture of his Land Rover in it to prove the bay was too small (pictured, the image Mr Roger took after returning to the car park)

A spokesman for the council said: ‘Every penalty charge notice (PCN) issued is supported by a range of evidence, including a photographic record.

‘In this case, the PCN was issued correctly.

‘Regulations state that a vehicle must be parked within the marked bays.

‘In this case, the vehicle was positioned in a way that prevented other drivers from using the neighbouring parking space.

‘The car park in question has some bays that are noticeably smaller and are marked up to warn drivers of this fact. It also has areas on certain floors that can accommodate the wider vehicle.

‘When any PCN is issued we offer a number of opportunities for the driver to pay and the driver is given very clear notice of the consequences and timeline of what happens if they do not pay.

‘We only engage debt recovery enforcement agents following continued requests for payments being refused or ignored. We pursue PCNs to protect the public purse. We do not seek to intimidate residents or service users.

‘The debt recovery enforcement agents wear body cameras when carrying out their duties and are governed by a very strict code of conduct when working on our behalf.’