Men’s prostate glands tend to enlarge with age, making urination problematic. A new treatment that uses steam to reduce the size of the gland is set to become available across the NHS. Here, retired senior manager and grandfather-of-seven, Simon Dutton, 60, who lives with his partner Jane in Gloucester, tells ADRIAN MONTI how it helped him.

Staying fit and healthy has always been important to me. I go to the gym, ride my mountain bike and run; I eat sensibly, don’t smoke, and drink in moderation.

Yet in my early 50s, I needed to urinate more frequently, especially during the night, but often felt I couldn’t empty my bladder completely.

About seven years ago, my GP referred me to my local hospital. Luckily, after an examination of my prostate [the walnut- sized gland that wraps around the urethra, which takes urine out of the body] and an MRI scan, cancer was ruled out. Benign prostatic hyperplasia (BPH), or an enlarged prostate, was diagnosed.

I was told that as the gland enlarges, it presses against the bladder making you need the loo frequently and, as the urethra is squashed, urinating is more difficult.

I was prescribed tablets to relax my bladder muscles to make urination easier. These helped for a few months, but over the next year, I needed to urinate more often — usually every two hours. I would go four times at night, which would disturb my partner, Jane.

I began to feel that my bladder controlled my life. After online research, I stopped taking coffee (which can make you need the loo) and wouldn’t drink anything after 6pm. But this didn’t help.

I regularly saw a urologist and had tests to monitor the growth of my prostate and we discussed treatment options. 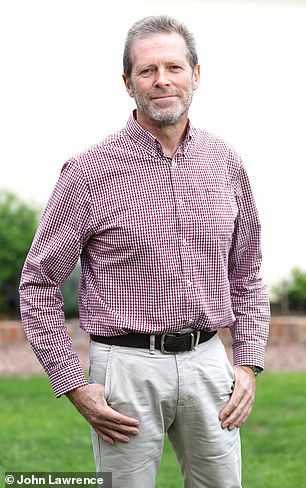 Retired senior manager and grandfather-of-seven, Simon Dutton, 60, who lives with his partner Jane in Gloucester, told how a new treatment that uses steam to reduce the size of the prostate gland helped him

I didn’t want the most common surgery — transurethral resection of the prostate (TURP) — where part of the prostate is removed. I was worried about side-effects including incontinence and erectile dysfunction. So we discussed less invasive procedures, including clinical trials.

In September 2018 I was put forward for a new treatment, Rezum. I was referred to surgeon Wasim Mahmalji, who explained how blasts of steam from a device inserted into my urethra would destroy enlarged tissue, so removing the blockage which was narrowing the urethra.

The treatment took only ten minutes and you could go home that day.

It seemed less invasive than other surgery and the recovery took only a fortnight. There were also fewer side-effects, so I jumped at the chance.

A month later I had the procedure at Hereford County Hospital. I had a general anaesthetic, so only remember waking up with a tube in my bladder. I didn’t feel any pain, only slight discomfort from the catheter. 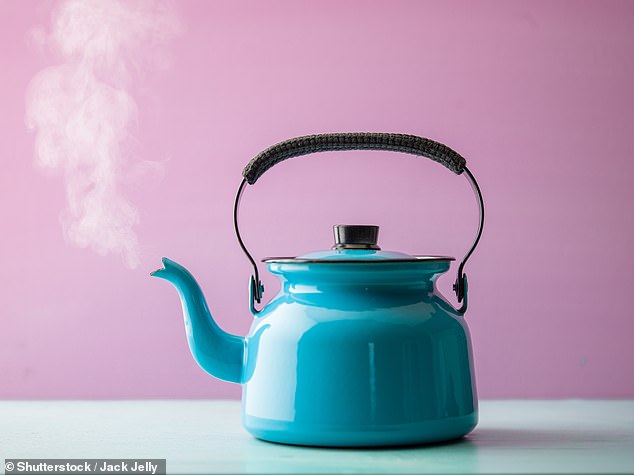 Unlike transurethral resection of the prostate (TURP) which can damage surrounding tissue and nerves, the steam destroys only the enlarged prostate tissue at which it is targeted (file image)

About four hours after going in, Jane drove me home. I took things gently for a few days. After a week, the catheter was removed at the hospital. I drank a glass of water to check I could urinate normally.

Straight away I noticed an improvement in my urine flow. Within two weeks everything was working perfectly again. I didn’t ever need painkillers.

At a follow-up appointment in May 2019, my urine flow was so strong Mr Mahmalji said my bladder was like a 25-year-old’s.

The treatment has given me my life back. I can go for hours without needing the loo — even at night. It hasn’t affected my sexual function either. I hope other men will benefit from it, too.

Benign prostatic hyperplasia affects roughly 50 per cent of men over 50. The prostate, which secretes the fluid in semen and has a role in continence, gets bigger in some men due to hormones such as testosterone.

As the gland enlarges, it narrows the urethra. This can lead to symptoms related to urinating, including wanting to go more, struggling to start, and feeling the bladder has not fully emptied.

Tablets can be used to relax the bladder muscles and shrink the prostate. If these aren’t effective (some patients cannot tolerate side-effects, which include dizziness and libido problems), surgery is an option.

In the UK more than 12,000 TURP operations are performed annually — using a resectoscope (a thin tube containing a heated wire and camera) when a section of the prostate is removed. This surgery takes 60 to 90 minutes. The patient spends a night or two in hospital, before several weeks recovering at home. It has a success rate of 90 to 95 per cent for the following five to ten years.

‘In a post-Covid-19 era, a big advantage of Rezum technology is patients will be in and out of theatre quickly with no need for an overnight stay,’ says Feras Al Jaafari, a consultant urologist at NHS Fife and the Spire Edinburgh Hospitals Murrayfield. ‘Data suggests there are fewer complications than with [traditional operation] TURP, such as incontinence and bleeding after surgery. This technology can also get men off pills which can abolish sexual function. It’s a game-changer for enlarged prostate treatment.’

However, it can often cause side- effects, such as retrograde ejaculation, which occurs when nerves are damaged. Semen goes into the bladder, which does not close properly, rather than the urethra. Nerve damage also means 10 per cent of men cannot achieve an erection.

In recent years, less invasive treatments have become available with fewer side-effects, including Rezum. I first heard about it at a conference in 2018 when speaking to the U.S. manufacturer of the equipment.

I was later taught the procedure by the company and Professor Richard Hindley, a consultant urologist at Hampshire Hospitals NHS Foundation Trust, who introduced Rezum to the UK in 2017.

Under a light general or local anaesthetic, a telescopic device is guided into the urethra, with a small camera attached. This device houses a retractable needle which, once activated, attaches to the prostate. Then jets of steam are passed through the needle into the enlarged gland.

These are activated using a hand-held device after sterile water is heated to 103c. I direct the steam to the target area on either side of the prostate.

Each blast lasts nine seconds and the heat kills tissue cells. The treated tissue shrinks, instantly, reducing the size of the prostate.

Unlike TURP which can damage surrounding tissue and nerves, the steam destroys only the enlarged prostate tissue at which it is targeted. There are no reported instances of incontinence, compared with up to 3 per cent of men who have TURP.

Once the ten-minute procedure is completed, we attach a catheter. Pink coloured urine and dead tissue may be seen usually up to a week or two afterwards.

Some patients notice an improvement in symptoms as soon as the catheter is removed and most recover fully in two weeks. We suggest a further two weeks before having intercourse. 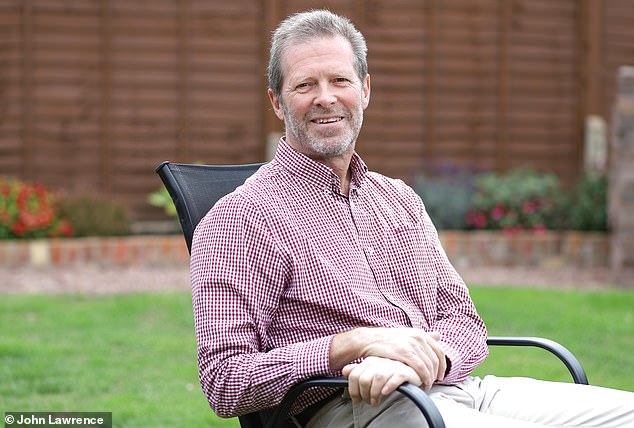 Simon (pictured) said: ‘The treatment has given me my life back. I can go for hours without needing the loo — even at night’

Ten patients — including Simon — were part of an initial study. The satisfaction rate was 95 per cent and there has been no need to re-operate, but this is an option if the prostate tissue grows back.

Although TURP can also be repeated, it has higher risk of lasting side-effects.

Data from the U.S. shows that only 4.4 per cent of patients needed repeated treatment after five years.

Last month, the National Institute for Health and Care Excellence (NICE) recommended Rezum be rolled out to more NHS hospitals after successful studies in the U.S. and results from 210 patients treated by Professor Hindley. NICE agreed that Rezum improved quality of life with only a low risk of sexual dysfunction. It’s currently available at 18 UK hospitals.

This technology is suitable for most men with enlarged prostates, but those with very large ones may do better with another surgical procedure. The key is selecting the right patient for the treatment. 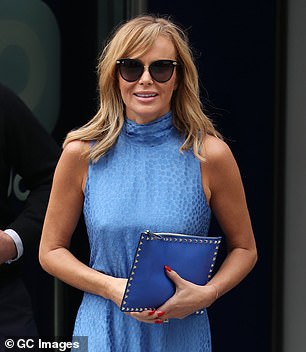 Secrets of an A-list body: How to get the enviable physiques of the stars

The 49-year-old presenter and mother of two is keeping in shape with daily workouts.

‘As a family, we’ve not let lockdown stop us from exercising, it’s actually become an essential hour of our daily lives, whether it’s a home workout, a bike ride, a run or even a walk around the park,’ she has said.

WHAT TO TRY: The dumbbell parallel push works the muscles in the shoulders and upper back and can be done sitting or standing.

Hold a weight in one hand at shoulder height in front of you. Draw the weight back by bending at the elbow and pulling the weight towards your collarbone. Ensure the weight stays parallel to the floor. Repeat for 30 seconds then change arms. Do five sets.