John Roby, 66, was riding his motorcycle on a highway in June 2020 when a pickup truck slammed into him.

Roby was immediately airlifted to the Mayo Clinic, where doctors soon discovered that he had devastating injuries to his upper, middle and lower face.

To ensure the best outcome, two physicians came up with a novel idea: to use 3-D models to figure out how to put their patient’s face back together.

It worked and when the surgeons walked into the operating room, they had a roadmap of how to reconstruct Roby’s visage.

Roby says he is now on the road to recovery from his ‘broken mess of bones’ and that his face has healed enough from the procedure for his grandchildren to recognize him again. 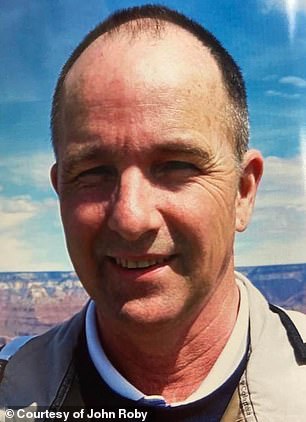 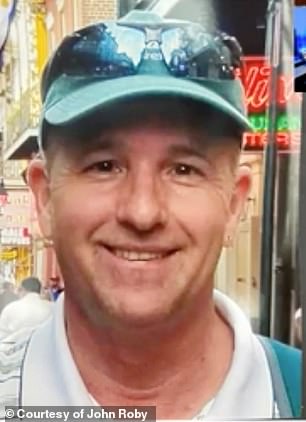 Roby was driving on a highway in June 2020 when his motorcycle crashed into a pickup truck that entered his lane. He doesn’t have much memory of the accident, but said he was thrown from his motorcycle. Pictured, left and right: Roby before the accident, dates unknown

‘I can’t tell you all the details of how I ended up [at the Mayo Clinic] because I was unconscious when I was brought here,’ Roby said.

‘If it wasn’t for helicopters and doctors, I would not be here talking to you today.’

He was driving his motorcycle along Route 169 near Mankato – 80 miles south of Minneapolis – when he crashed into a pickup truck that turned into his lane.

Roby doesn’t have much memory of the accident – with details mostly built from the accident report and medical records – but says he was thrown from his motorcycle.

Even with a helmet, he suffered disastrous injuries including to his aorta, neck, legs, arms and face.

In fact, every bone in his face was broken.

He transported from the scene of the accident to the Mayo Clinic, in Rochester, via Mayo One, a helicopter air ambulance.

After he arrived, several physicians were alerted about the extent of his injuries including Dr Basel Sharaf, a plastic and reconstructive surgeon.

After the aorta and neck injuries – which were the most severe – were addressed, Roby underwent imaging and CT scans of his face.

From the scans, Sharaf determined that Roby had extensive facial trauma and said that moving Roby’s bones back to where they were supposed to be while in the operating room – the traditional method – would result in more time wasted.

Instead, he thought, why not use 3-D models to figure out how to fix the bones and in what order?

To do this, Sharaf would need the help of the Mayo Clinic’s 3-D Anatomic Modeling Laboratory to put Roby’s face back together. 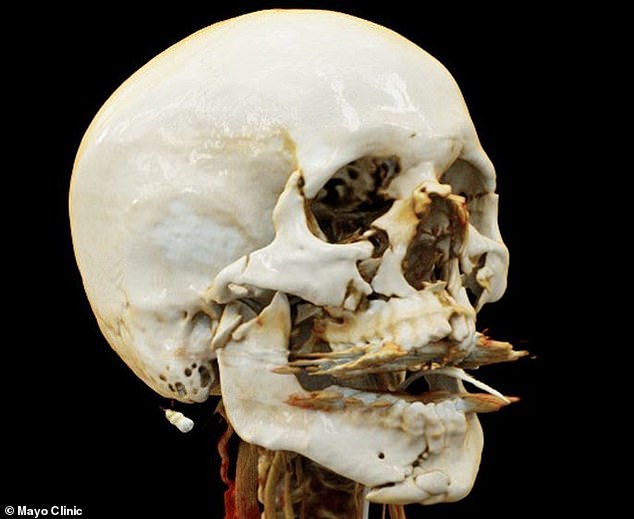 In addition to injuries to Roby’s aorta, neck and limbs, nearly every bone in his face was broken. Pictured: A 3-D printed model shows the different broken bones in Roby’s face 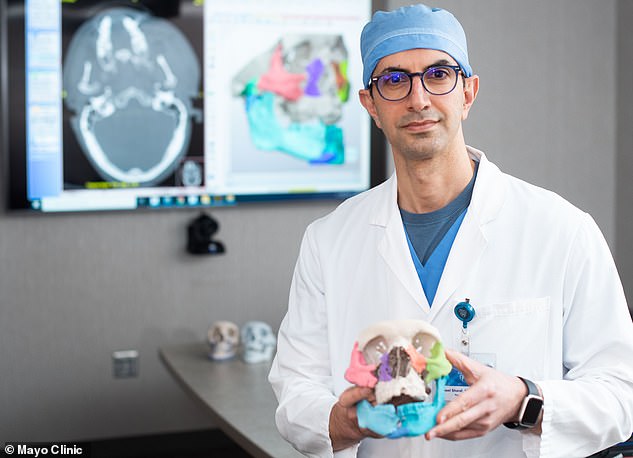 Roby was airlifted to the Mayo Clinic, where two doctors used a unique approach to perform his facial reconstruction. Pictured: Dr Sharaf holds one of the 3-D models used to help put Roby’s face back together.

‘But this person essentially had all the bones of his face broken. So, when you’re talking about facial trauma, that’s about as many bones as you can break.’

First, the Mayo Clinic’s engineering team created real-life models of Roby’s facial bones as they were in their broken state.

Then, Morris used the CT scans to recreate Roby’s face as it should look with each fracture fragment assigned a different color.

From there, Morris and Sharaf could figure how to move the fragments back to where they belong using mirror imaging as well as using recent photographs of Roby.

Next, Sharaf and his team used the models to bend plates that he would need to use to attach the bones back together in the exact way they needed to be bent rather than doing it during surgery.

‘You can imagine being in the operative room, finding this piece of bone after you’ve removed the skin and trying to bend this plate in the exact way that it fits on this bone,’ Morris said.

Sharaf added: ‘Instead of the traditional approach of basically moving the bone to where you think it should be and then you bend the plane to put it together, we use a plate we already pre-bent and then we try to bring the bone to fit that plate.’ 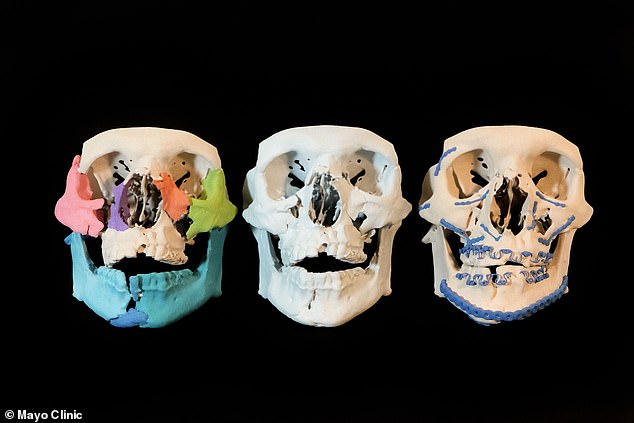 A 3-D model was printed of Roby’s skull with all the broken fragments colored differently, which surgeons used to figure how to put his face back together (left). Plates to screw the fragments back together were pre-bent rather than during the operation (right)

Lastly, a final 3-D-printed skull was created to show the reconstruction would look, including all the bones and plates in their proper place.

‘It’s kind of a reverse engineering approach, which I find is very helpful when you have so many different pieces you’re trying to put together,’ Sharaf told DailyMail.com.

‘Definitely having part of the work that you do during the procedure already done ahead of time and knowing where the parts are going to be…you kind of walk in and you already have a plan or a map of the reconstruction .’

Overall, the operation took 11 hours. However, without all the pre-planning, the doctors said it would have likely taken an extra three to four hours.

This also means less time that a patient is under anesthesia, less blood loss during surgery and overall better outcomes.

Roby’s road to recovery has been a long one, especially because he has had to undergo multiple surgeries to treat several injuries he sustained. The operation took 11 hours but, without the pre-planning, it could have taken at least three to four hours longer. Pictured: Drs Morris (left) and Sharaf (right) examine the 3-D models of Roby’s skull 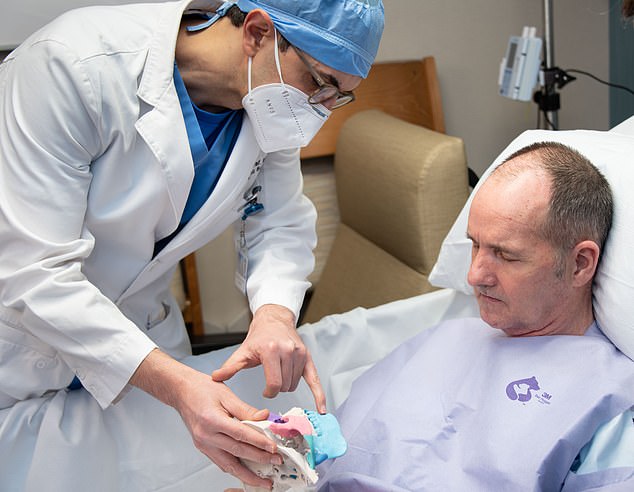 Roby said he gets better with every follow-up visit and that he has healed enough that his grandchildren now recognize him. Pictured: Roby is shown a 3-D model used to help reconstruct his face by Dr Sharaf at the Mayo Clinic

However, he said he feels he is getting better and that he has a part of his life back.

‘And the most important thing is my girlfriend does and my grandkids recognize me. They know who I am – I’m grandpa.’

Both Sharaf and Morris say that Roby has greatly improved and that they hope his story gives hope to other victims of similar incidents.

‘I think he’s made a full recovery from most of his injuries…His face looks amazingly well due to the work of Dr Sharaf,’ Morris said.

‘Every time he comes, he kind of leaves a little better. I think if you saw him when he came in and all the things he was facing from a critical high level trauma, he’s doing fantastic and living his life normally.

‘I think the story just provides a general sense of hope that you could be in a pretty bad spot coming into a hospital…and there’s hope and people who could help you recover from your injuries.’