A pensioner has accused Bet365 of ‘burying its head in the sand’ over child gambling after it refused to accept that his autistic grandson used his account to place thousands of pounds of bets.

Richard Powell said Owen, 11, went on to his computer while he was out and played what he called ‘granddad’s horse racing game’, unknowingly losing £3,300 in the process.

The 72-year-old approached the company with evidence that he was out, as well as school and medical records showing his grandson’s condition, but Bet365 said it did not prove that he did not make the bets. 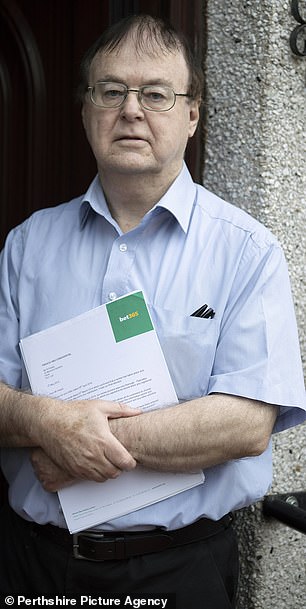 Richard Powell, right, approached Bet365 which is headed by Denise Coates, left, to seek a refund after his 11-year-old grandson had placed bets on horse races worth £3,000

He has fought the firm for four years but says it has now told him it will only talk to him through lawyers, which he cannot afford.

Mr Powell, a retired insurance underwriter, said it was an example of using ‘corporate muscle’ against a poor pensioner.

The company may also be in breach of its licence conditions, as laid down in the Gambling Act 2005, which say money staked by minors must be refunded. Mr Powell said: ‘It horrifies me. I’m telling them about a child betting and they are just putting their head in the sand about it.

‘Bet365 are encouraging children to bet and they are lying about not doing it.’

On Thursday it was revealed that the firm’s billionaire boss Denise Coates had awarded herself a £265million pay packet this year. Gambling campaigners described the figure as ‘obscene’. It is 150 times what the company has pledged to gambling addiction charities, under what is known as the ‘voluntary levy’, and made Mrs Coates the country’s best-paid boss.

Mr Powell has sent more than a dozen letters directly to Mrs Coates and enlisted his local MP to speak to her, all to no avail. The pensioner, who lives with his disabled wife Eileen in Perth, Scotland, said: ‘Bet365 have been totally unsympathetic. They told me to take the case to court in the knowledge that… we have no funds to do this.

‘They quoted “terms and conditions” to justify their stance.

‘The fact is that the bets were placed by a legal minor so Bet365 are obliged to refund the stake money. This is the heart of the Gambling Act 2005.’ According to section 83 of the Act, all stakes bet by a legal minor have to be refunded to the account holder ‘as soon as is reasonably practicable’.

On Wednesday a major report said 450,000 children gamble regularly through fruit machines, bingo, betting shops or online. Around 30,000 had played on gambling websites or smartphone apps, with many using a parent or guardian’s account, the Gambling Commission report said. Mr Powell said his grandson, now 15, has a ‘track record’ of misusing his mother’s computer, once spending more £1,000 with Amazon, which the firm refunded.

He added Owen was a ‘computer whizz’ but does not understand the value of money.

His wife was in the house but was not concerned when Owen went on the computer, because he was allowed to play games on it.

Brian Chappell, of Justice for Punters, which has been helping Mr Powell, said: ‘Gambling companies like Bet365 just do what they want, so unless you have the money to take them to court they can fob you off with anything.’

Bet365 said last night: ‘This case has been thoroughly and respectfully reviewed on a number of occasions. Based on all the facts before us, we’ve been unable to find that the bets in question were placed by anyone other than Mr Powell or someone acting under his instruction.

‘We are comfortable that we have complied in full with all of our legal and regulatory obligations.’