A grandmother has been killed along with her toddler grandson in a shooting in Georgia.

The pair were found in front of their mobile home in the town of Byromville, a small town around 120 miles south of Atlanta, at 4.30am on Thursday morning.

Someone else living inside the home called 911 to report that they had been shot along with a teenage girl.

By the time authorities arrived ten minutes later, the grandmother and toddler had died. The 17-year-old girl had been shot twice and she was taken to hospital.

Four hours after the initial call was placed, they found one of the victims’ neighbors, a 60-year-old man, lying dead behind his home. He had also been shot.

A grandmother and her toddler grandson, who is around two, were shot dead in a front yard in Byromville, Georgia, on Thursday morning. Picture: WGXA

No description of a suspect has been given and police will not say whether they believe there is an outstanding risk to the community.

J.T. Ricketson of the Georgia Bureau of Investigation told DailyMail.com on Thursday that the grandmother, teenage girl and toddler were all getting ready to leave for the day when they were gunned down.

The grandmother starts work early and had gotten up to start the car.

She was due to take the teenager to a bus stop nearby and the toddler to daycare before going to her own job, he said.

At least six or seven people live in the mobile home with them, he said.

By the time police arrived, some of those residents had fled the scene and police are trying to track them down.

They refused to say whether any of them was the suspect, or if there is more than one suspect.

‘All I can say is that three are deceased and one is in hospital,’ he said.

Police hope to interview the 17-year-old shortly. She underwent surgery as soon as she arrived at the hospital in Macon, which is around an hour away from where she was shot.

She is still believed to be in a critical condition.

Ricketson said that the four others who were living inside the mobile home were all adults. 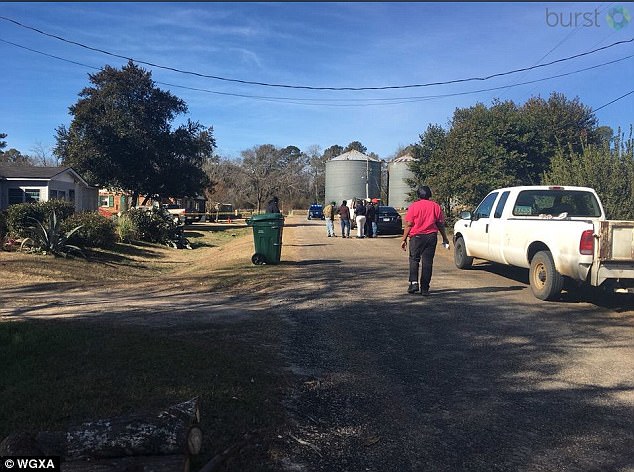