Grandmother, 55, died in house fire when she refused to leave her ‘soulmate’ husband

A grandmother died in a house fire because she refused to leave her ‘soulmate’ husband who she believed was trapped inside- but he had escaped through the back of the house.

Melissa Shaw, the daughter of Gail Lamb who died in the fire, described the awful incident on Friday as a ‘tragic love story’.

Mrs Lamb, 55, stayed in her burning house in Saline, Fife, on Friday night, because she thought husband Derek was still inside.

Gail and Derek Lamb together. Neighbours tried to save Mrs Lamb but she refused to leave, asking where her husband was 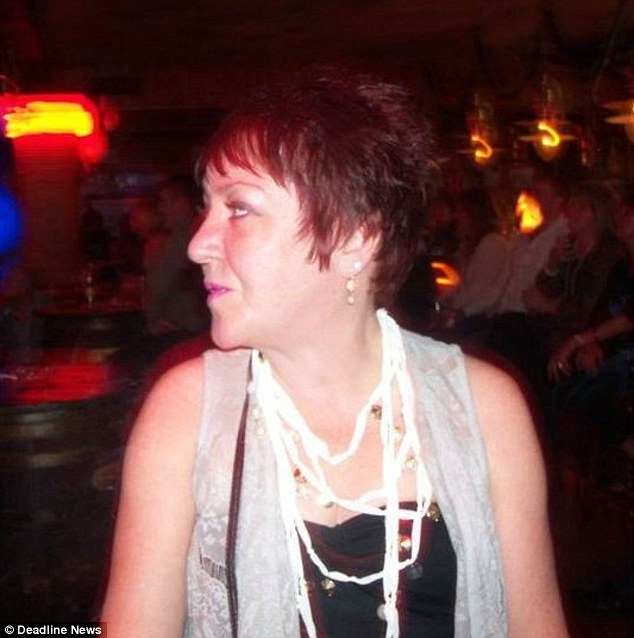 Gail Lamb, 62, had been with her husband for nearly 30 years when the horrific fire broke out in their home. It was believed to have started from an electrical appliance

But Mr Lamb, 62, had already escaped the inferno through the back of the house – unbeknownst to his devoted wife.

Neighbours tried to save Mrs Lamb by climbing up a ladder to the top floor of their two-story house but she refused to leave, saying: ‘Where is Derek?’

Speaking today, Melissa, 35, said: ‘It’s like a tragic love story. ‘My mum and Derek were just made for each other and idolised each other.’

Neighbour Shelley White said: ‘I saw the fire and ran outside but by this time my neighbours had already rung the emergency services.

‘You could feel the heat from the house and the smoke was immense.’

‘Our neighbour, Sid, grabbed Gail’s hand from the top of the ladders and told her to get out but all she said was: ‘Where is Derek?’

‘She went back into the house looking for him but Sid managed to grab her hand for a second time and he was just screaming at her to get out but she wouldn’t leave Derek.

‘There was nothing we could do, the fire was too bad.’

Derek and Gail had been together for nearly 30 years before a horrific fire broke out at their home on Friday night.

The blaze is believed to have started from an electrical appliance in the kitchen downstairs. 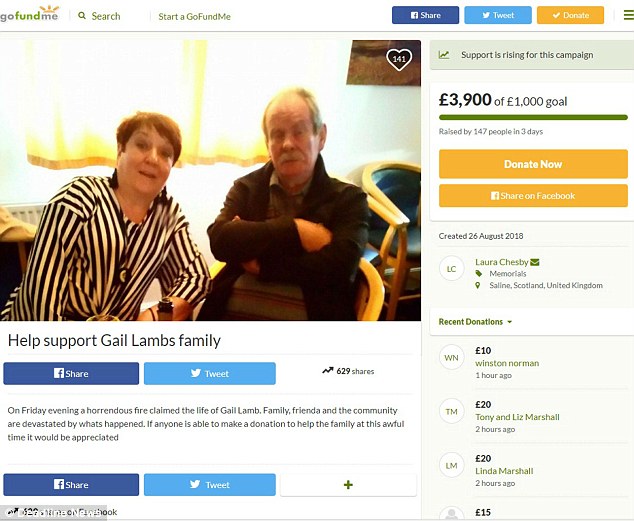 A GoFundMe page has also been set up for the family by Laura Chesby, where £3900 has already been raised

The couple were both in bed asleep at the time of the fire, when Gail woke up first.

Both exits of the house were completely blocked by fire so Gail screamed for help at the front of the building while Derek shouted at the back.

Mr Lamb then managed to escape through the back of the the property but had said that he couldn’t see a thing and he had ‘no idea’ where Gail was.

Mrs Lamb was later pronounced dead at the scene.

Since the incident, Mr Lamb has told family members that he has lost his ‘soulmate’.

Tributes of flowers have been left outside the couple’s home in Saline since the fire.

A GoFundMe page has also been set up for the family by Laura Chesby, where £3900 has currently been raised.

‘Family, friends and the community are devastated by what’s happened. ‘If anyone is able to make a donation to help the family at this awful time it would be appreciated.’

The Go Fund Me page can be accessed here