Grandmother, 59, is bitten by 8ft grey seal while she swam off Devon coast

Grandmother, 59, is left with gash in her leg after she is ‘bitten’ by 8ft grey seal ‘stronger than a Rottweiler’ while she swam off Devon coast

A grandmother’s leg was cut by an 8ft grey seal after she was approached while swimming off the Devon coast.

Angela Neil, 59, was with her swimming partner near coastal rocks in Brixham, Devon, when a Bull Grey seal swam over to her.

The seals have been known to approach people around the area. The creatures, like dogs, are known to explore things with their mouths.

The seal mouthed around the bottom of Ms Neil’s right-leg, leaving her with bruises on her foot and calf. The seal then ‘mouthed’ her left leg, which cut her. A stock image is pictured above [File photo]

The seal mouthed around the bottom of Ms Neil’s right-leg, leaving her with bruises on her foot and calf. The seal then ‘mouthed’ her left leg, which cut her.

She was not hospitalised but spoke to a doctor who advised her to take specific antibiotics after the incident.

Environmental organisation The Seal Project said: ‘Angela states that at no point was the seal showing aggressive behaviour or making any audible noises or snorting which can be an indicator of warning.

‘This bull seal was not protecting any pups as this is not grey seal pupping/breeding season. All the indications suggest the seal was alone and simply curious.

‘Angela is very clear that this wild encounter ‘was not an attack and is really quite inconsequential’.

Torbay’s RNLI volunteers posted on social media: ‘Warning to anyone thinking of swimming off the rocks outside the Shoalstone Pool or in that general area of coastline today.

‘A person has been attacked by a seal there this morning and has been taken to hospital for treatment.

‘So don’t swim in that area and stick to the sea pool itself which is safe and supervised by a lifeguard.

‘Please share with anyone who you think may be likely to swim in the area.’ 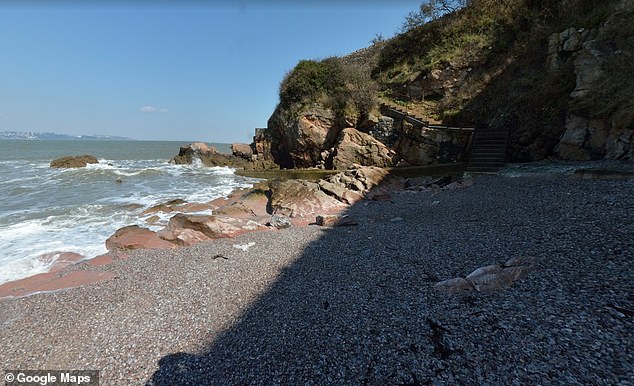 The grandmother’s leg was cut by an 8ft grey seal after she was approached while swimming off the Devon coast. The coastal rocks near Brixham, Devon, are pictured above in a stock image [File photo]

Helen Gowans, public and community engagement manager at the Ocean Conservation Trust, said it is ‘not something that tends to happen very often’.

‘Seals are amazing animals and generally speaking, there is little to fear if you do happen to bump into one when swimming in the ocean,’ she said.

‘Although they are large creatures, which can seem a little intimidating at first, they are gentle, have a similar level of intelligence to a dog and tend to be quite playful.

‘If you did spot one, then you’d be very lucky to have the chance to encounter it in its natural habitat and see it up close.

‘Even so, we would advise people not to approach seals themselves, whether they are in the sea or on the beach, as disturbing them can cause them to panic and use up valuable energy stores, which can then have a negative impact on their breeding success.’