A grandmother-of-two almost committed suicide after being left in agonising pain throughout her body from a controversial mesh implant.

Sylvia Litchfield, 61, from Birmingham, claims the only reason she is still alive today is because of her three cats and grandchildren, who gave her a purpose to live.

Her problems stem from a rectopexy mesh, similar to that of the vaginal procedure which has left thousands of other British women in agony.

The scandal came to light earlier this year, but its true extent is yet to be uncovered – though mounting pressure is being placed on health officials to address concerns.

Senior doctors now calling for a public inquiry into its usage say it could be akin to thalidomide, as the NHS has been accused of sweeping the matter under the carpet.

Within days of undergoing the scandal-hit procedure, an ‘incredible’ discomfort started in Ms Litchfield’s body – before it spread and left her disabled.

The mesh, made of the same material as that used in the more common surgery, even triggered a stroke and heart attack, she claims.

Sylvia Litchfield, 61, claims the only reason she is still alive today is because her three cats and grandchildren gave her a purpose to live for (pictured before the surgery in 2014)

Not only was the pain so bad it forced the former charity worker to retire, but she is now completely dependent on crutches to move.

Speaking for the first time since having the mesh fitted, Ms Litchfield has revealed the devastating impact it has had on her life.

She told MailOnline: ‘If it wasn’t for the fact I have three cats, a granddaughter and grandson, I would have done it [committed suicide] a long time ago.

‘The pain just drains you.’ Ms Litchfield described her discomfort as being like ‘having your skin scrubbed with a wire brush all the time’.

She added: ‘All I can think of in the morning is getting through the day, not going anywhere has taken everything away from me except my existence.

‘I was fine until the mesh. I’m still in incredible pain from my waist down to nearly my knees. I can’t stand or walk properly, I can only do that with crutches.’

Ms Litchfield, who now lives in a warden-controlled flat, was originally fitted with the mesh at Walsgrave Hospital, Coventry in January 2014.

It was meant to only take 20 minutes, but the procedure to treat her collapsed rectum went wrong and instead lasted for nearly seven hours. 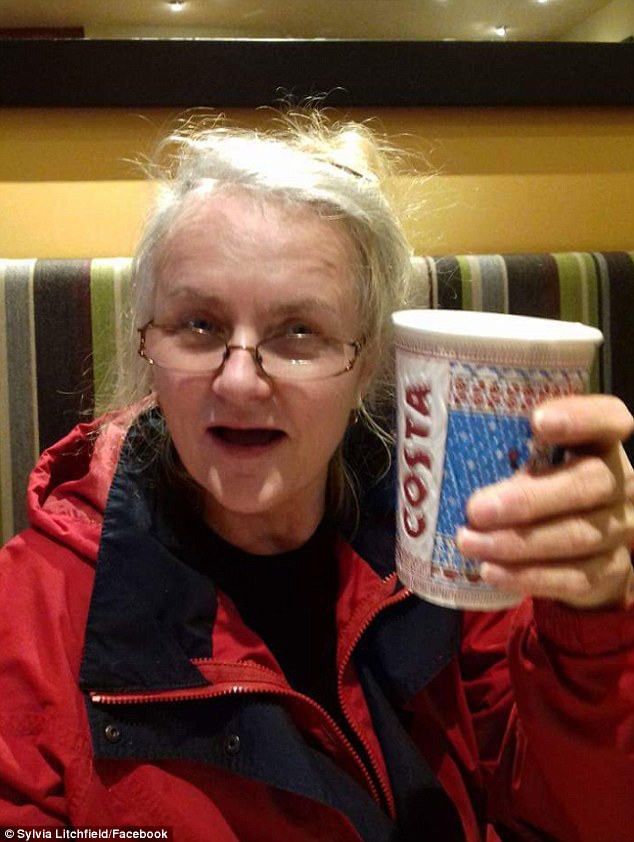 Within days of undergoing the scandal-hit procedure, an ‘incredible’ discomfort started – before it spread to the rest of her body and left her disabled (pictured now)

She only found out something happened while under the knife when a concerned passerby asked why she was gone for so long.

After challenging nurses for more information, Ms Litchfield found out her blood pressure plummeted during the operation, before shooting back up.

But no more details were given to her, despite her relentless pursuits to discover the complete truth about the surgery.

Problems started just 10 days later, sparking her first visit to the doctor. But they said she was just recovering from her operation.

When Ms Litchfield returned again two weeks later, she was told that it was just an infection, she claims, despite evidence linking such pain to the mesh.

But her attempts to have the mesh removed have been unsuccessful, as she is adamant the NHS is trying to cover-up the scandal.

No consultant will admit the mesh is causing her pain, meaning she is unable to claim the correct the right benefits. As a result, she said she is ‘living on a pittance’.

She said: ‘Getting a doctor to say that [the mesh is causing pain] is so difficult, I’ve got the same symptoms as hundreds, if not thousands, of other women.

‘They wouldn’t look, they wouldn’t accept it could be the mesh, they just dismiss it every time you ask. It’s a huge problem.

‘Unless you can get doctors to acknowledge the damage it is doing, we will continue to be left in excruciating pain that keeps up all day, you can’t escape it.’

Ms Litchfield has since put her details forward to the MHRA for investigation and is in the process of getting records from the hospital to seek legal action.

She has researched and found the damage that toxins in mesh can do, causing high blood pressure – partly responsible for her near-death cardiac events.

As a result of her heart attack and stroke, she is unable to take most painkillers – leaving her reliant on widely-ineffective paracetamol and aspirin.

Alarming studies show that mesh implants can trigger pain, erosion and perforation in up to 40 per cent of women. Others suggest it could be as high as 75 per cent.

But English health officials have yet to acknowledge the risks of the brittle implants which can break into tiny fragments and cause nerve damage.

Currently, the NHS and MHRA state that as little as 1 per cent of women will go on to experience the life-changing complications such as pain.

Vaginal mesh has been considered a high-risk device for nearly a decade in the US, with officials accepting that up to 40 per cent of women may experience injury.