Grandmother, 63, gets ‘shades’ that act as sunglasses tattooed onto her EYEBALLS

Grandmother, 63, gets ‘shades’ that act as sunglasses tattooed onto her EYEBALLS to protect her sensitive vision

A grandmother has had ink tattooed onto her eyeballs to act as sunglasses to protect her sensitive vision.

Mandy Liscombe, 63, is believed to be the first person to have had the pioneering treatment on the NHS in Wales.

Mrs Liscombe had laser surgery in the past to treat glaucoma but an unusual side effect meant it hurt her eyes to look at the light.

Doctors tried various solutions including coloured contact lenses, but nothing was successful.

Mrs Liscombe, from Swansea, met ophthalmology consultant Mario Saldanha after five years of agony, and he offered to inject tattoo ink onto the corneas of her eyes.

After the procedure at Singleton Hospital in Swansea, Mrs Liscombe said the effects have been ‘life-changing’.

Mandy Liscombe, 63, was the first to have tattoo ink injected into her eyes by ophthalmology consultant Mario Saldanha to act as sunglasses and protect her sensitive vision 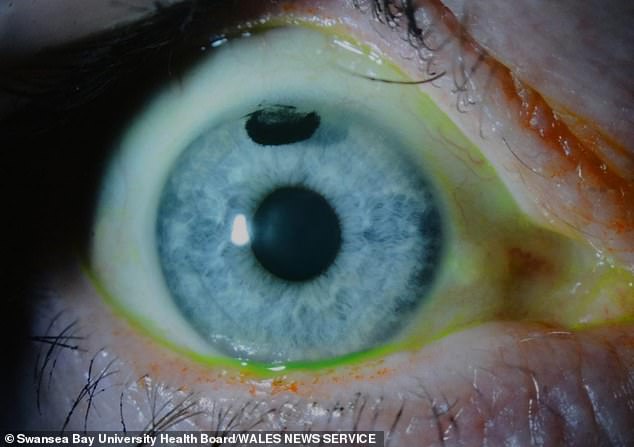 Mr Saldanha created a pocket in the centre of the cornea over where Mrs Liscombe had laser surgery. Then a layer of tattoo ink was injected and the pocket was closed, acting like a filter

Mrs Liscombe said: ‘I became extremely light-sensitive. It affected me when I was watching TV or when I was in the theatre or cinema.

‘Sometimes I felt it wasn’t safe to drive in the dark. I drive early in the morning to go to work and I drive the grandchildren.

‘But once headlights hit me, I really couldn’t see.’

Mrs Liscombe had previously had laser eye surgery to treat glaucoma – a build-up of pressure in the eye that needs early treatment to avoid damage or blindness.

WHAT IS CORNEAL TATTOOING?

Corneal tattooing is usually offered when the surface of the eye is uneven due to scarring, thinning, disease or birth defects, which affects sight.

Like Many Liscombe, it may be offered to reduce the symptoms associated with laser peripheral iridotomies (LPIs) – laser surgery for glaucoma.

Contact lenses are a better option, but some people can’t tolerate them.

Sometimes corneal tattooing is for cosmetic reasons, such as to treat discoloration.

Several different methods exist today and it is a challenging procedure.

Generally in most procedures, the ink is applied directly to the cornea.

But consultant Mario Saldanha, Spire Cardiff Hospital, said this method has temporary effects as the cornea doesn’t have pigments to soak up the ink like skin does.

Therefore, he created a pocket in the cornea where the ink is injected.

She then experienced unusual side effects from the surgery which resulted in her eyes becoming highly sensitive to light.

It started to impact her daily life as she felt unsafe to drive.

Other consultants suggested she wore coloured glasses, which made no difference, and then coloured contact lenses which she couldn’t tolerate.

Then after five years of problems she was referred to consultant Mario Saldanha, who is currently a consultant at Spire Cardiff Hospital.

He explained the problem was caused by light entering Mrs Liscombe’s eyes twice – through the pupils and through artificial openings the laser procedure created.

Mr Saldanha said surgeons traditionally used tattoo ink to try to block off certain abnormalities on the cornea, the clear front part of the eye.

But, unlike skin, the cornea has no pigment to take up the ink so it was always a temporary procedure that faded and had to be repeated.

Mr Saldanha said: ‘For Mrs Liscombe, we used a tiny, precise scalpel to create a pocket in the centre of the cornea over where she had the laser.

‘We then put in a layer of tattoo ink and closed the pocket.

‘It’s like having a filter in the clear window of her eye but without affecting the coloured part, and retaining the artificial opening. It worked instantly.’

Mrs Liscombe’s first had the procedure in her right eye, the worst affected, two years ago.

She said: ‘Once the dressing came off and my pupil dilated again, it was instant. It was gone straight away.

‘Mr Saldanha thought that perhaps it would compensate for the other eye but it accentuated the problem because I was left with one squinty eye.

‘Now I’ve had that done too and it’s fantastic.’

As it was the first procedure of its kind in Wales, Mr Saldanha has since published an article on it so other surgeons can adopt it.

This surgical procedure is not to be confused with the cosmetic tattooing of the conjunctiva – the white of the eyes.

This can be dangerous and can cause vision complications or even blindness, experts say.

The eyeball contains a fluid called aqueous humour which is constantly produced by the eye, with any excess drained though tubes.

In England and Wales, it’s estimated more than 500,000 people have glaucoma but many more people may not know they have the condition. There are 60 million sufferers across the world.

Glaucoma can be treated with eye drops, laser treatment or surgery. But early diagnosis is important because any damage to the eyes cannot be reversed. Treatment aims to control the condition and minimise future damage.

If left untreated, glaucoma can cause visual impairment. But if it’s diagnosed and treated early enough, further damage to vision can be prevented.