A grandmother had a lucky escape when her car flipped on its side in a crash on a road riddled with potholes.

Maggie Turner, 64, was driving home in Eltham, South East London, when her car veered into a parked vehicle and flipped on its side before also striking a parked van.

She clambered out of the passenger window – scratching her hands on shattered glass – and was helped out of the car with stepladders as neighbours ran to her aid.

Crash scene: Maggie Turner, 64, was driving home in Eltham, South East London, when her car veered into a parked vehicle and flipped on its side before also striking a parked van 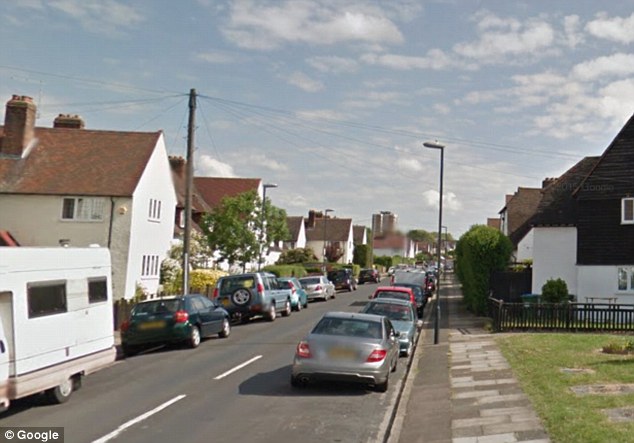 The grandmother-of-two said she is very lucky not to have been seriously hurt in the crash on the pretty Grade II-listed Progress Estate in Eltham in her Skoda Yeti.

She said: ‘I turned into the road. I wasn’t going fast – as I don’t drive fast. But the car suddenly veered and hit a red parked car and it flipped on its side.

Fascinating history of the Progress Estate

The Progress Estate was built following an Act of Parliament in 1915.

Munitions workers from across the country made their way to work at the Woolwich Arsenal in South East London during the First World War.

Many had to live in wooden hutments hastily put between Woolwich and Eltham. But fearing an outbreak of Spanish Influenza, permanent homes were needed for the workers.

The Progress Estate was agreed by an Act of Parliament and built in Eltham within six months.

Ironically the estate is modelled on a German village – even though Britain was at war with Germany. Each house is designed slightly differently with no two houses exactly the same.

It is the only listed housing estate in the country and there are strict rules relating to doors, windows and fencing put up on the facades.

‘I then hit a van which stopped me from flipping over any more thankfully. I can’t honestly say I hit a pothole but there are a lot on the road.

‘The passenger side tyre has blown. I’m fairly convinced it was involved in some way though. I can’t see how the car would veer like that otherwise.’

Ms Turner, who has lived on the estate for nearly 40 years said: ‘I’m extremely lucky. I’ve got a few scratches where I caught my hand on the broken glass as I got out but that’s about it.

‘I’m just glad I didn’t have anyone else in the car like my grandchildren. My family are furious about it and believe the pothole was responsible. There are quite a few in the road. I have contacted the council about it.’

One resident in the street said: ‘We heard the accident and looked out and saw a car on its side. There are a lot of potholes in the road – especially in the area where the accident happened.’

A London Fire Brigade spokesman said: ‘We were called at 3.38pm yesterday to reports of a road traffic collision in Eltham. Three vehicles were involved and no people were trapped. The incident was over for firefighters at 3.50pm.’

The Royal Borough of Greenwich has not yet returned a request for comment.