A 78-year-old woman has been forced from her home of almost 60 years after her eldest son contested his father’s will and was awarded the family’s $3million farm.

Beverley Priestley must leave ‘Salt Glen’ in Carinda, 650 kilometres north-west of Sydney, by tomorrow – or pay her estranged eldest son Duncan $1,000 for every extra day she is there, a court ruled last week.

Mrs Priestley, who first moved to the farm when she was just 21 to start a family, came up with $52,000 to appeal that decision in the High Court – but lost.

Beverley Priestley, pictured with her eldest son Duncan, who is now 55 and has given his elderly mother until just after Christmas to leave the family property

Mrs Priestley was left the Salt Glen property when her ex-husband died, but she has now been left homeless after the property was awarded to her son in an appeal 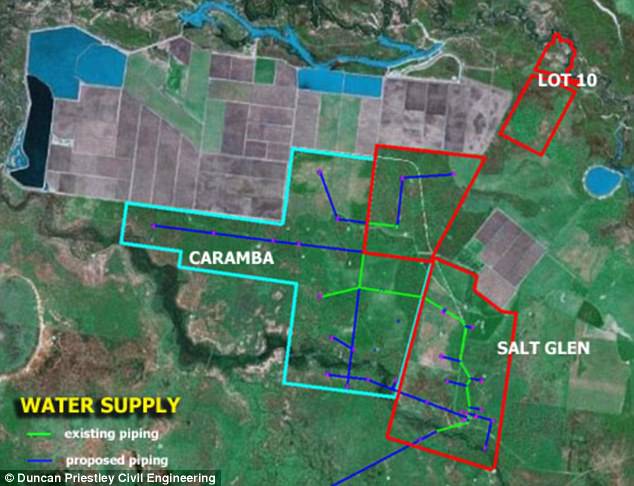 The 8,500 acre property,  highlighted on this map with previous family titles, has been the woman’s home for over 55 years

Her two younger children Claire and Chris sold what machinery they could to come up with the money for the appeal – with Chris even parting with his Toyota LandCruiser.

Mrs Priestley was with her daughter Claire when the appeal was thrown out earlier this month – and she was told she had just two weeks to leave the property forever.

‘We went outside and just burst into tears,’ Claire Priestley said.

Mrs Priestley is so heartbroken by the final decision she has decided not to go back to the property where she raised her three children – instead getting her two youngest children to pack up her belongings.

The elderly grandmother briefly left the home when she divorced her husband in 2004 – moving to a house on the greater family property. She went back to the family home after her ex-husband’s death – and their reconciliation.

‘We have been left with the clothes on our back and some furniture,’ Claire Priestley said.

Mrs Priestley ‘can barely walk’ because of the shock and continues to cry over the lost farm.

‘I just feel so terrible, I am in shock, I can’t bear to see the place again there are just too many memories there,’ she said.

Mrs Priestley’s friends have offered to put her possessions in their shearing shed – she will stay with her daughter for a few weeks until she can find a home which will accommodate her beloved pet kangaroo.

‘I just want a place that will have Billy – he won’t survive without me and we can’t go home,’ she said. 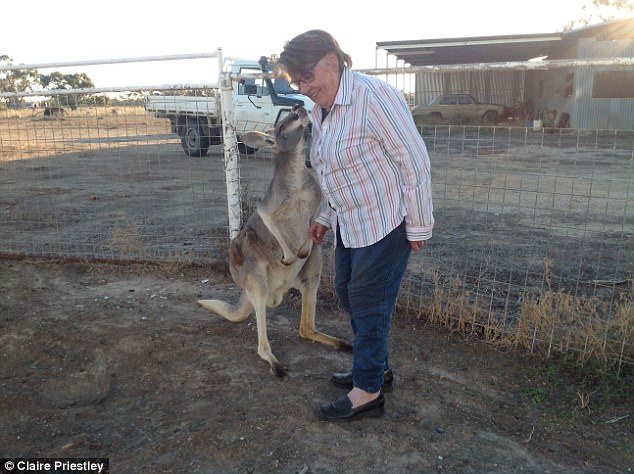 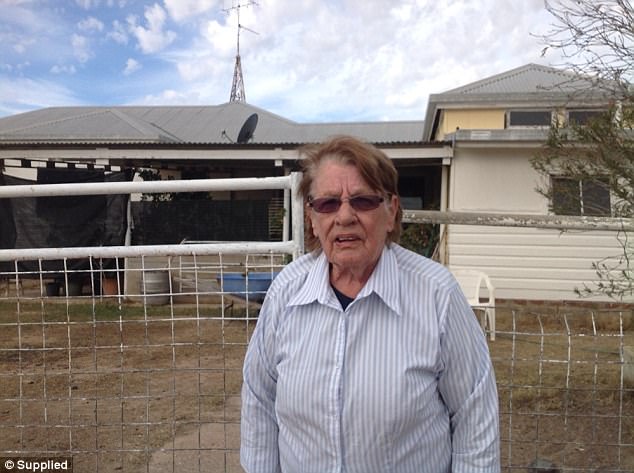 Mrs Priestley, pictured outside Salt Glen, ‘burst into tears’ after the High Court threw out her appeal in favour of the previous decision 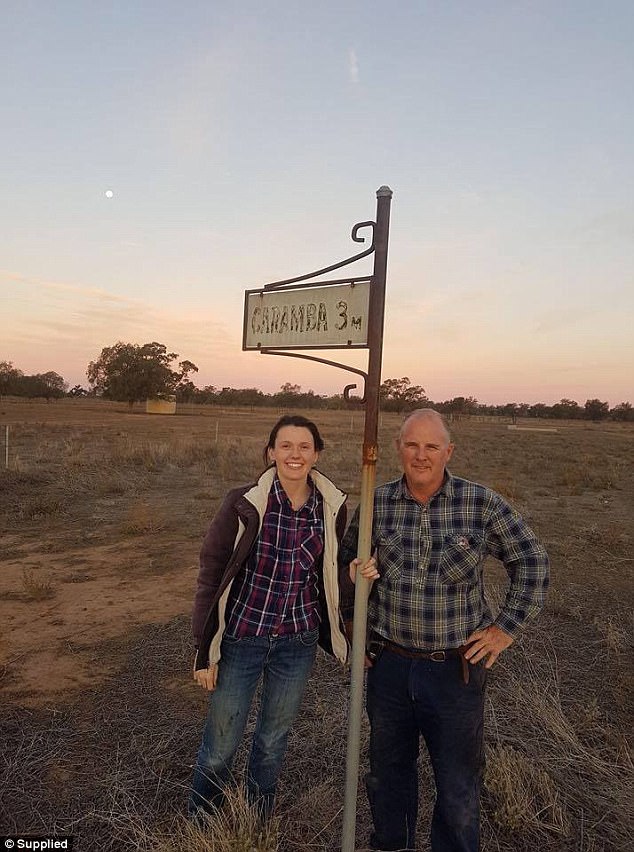 Duncan, pictured with his daughter Catherine, has given his mother until December 29 to vacate the property – every day after that will cost the elderly pensioner $1000

Timeline of the Priestley family feud

2007 – Mr Priestley reconciles with ex-wife and children, changes will to four equal parts

‘I don’t think our family will ever recover from this – I just don’t know how I could ever speak to Duncan again.’

Mrs Priestley was just 21 when she married the only man she would ever love and moved to his farm in the tough, drought-prone county of NSW’s far north to start a family and build a life.

The Priestley family’s tale reads like a Shakespearean tragedy of love lost and regained and family loyalties tested and – ultimately – tragedy.

The NSW Court of Appeal on June 27 reached its verdict in the long-running battle over Salt Glen, the 8,500-hectare cattle and crops property that has been in the Priestley family since 1908.

Duncan, was made the sole owner despite evidence it was against the dying wishes of the family’s pastoralist patriarch and her ex-husband, Gordon.

Mrs Priestley is upset the most recent appeal never made it to hearing as a decision was made on the previous hearin’s papers – as the judges decided the Court of Appeal’s verdict was correct.

Duncan Priestley, who claims he is the only family member to have worked the farm as his father would have wanted, once vowed to kick his mother and siblings off the property because of the acrimonious family quarrel. 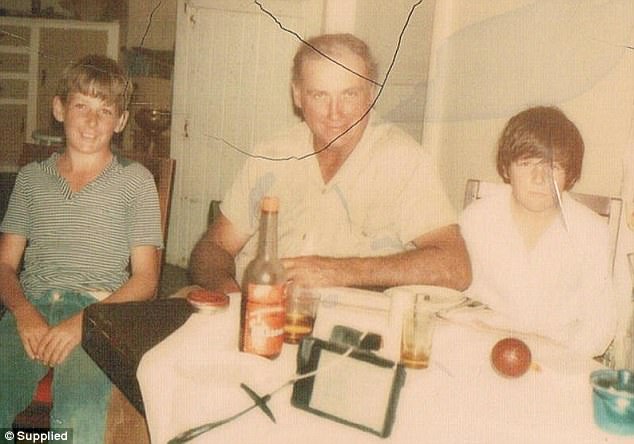 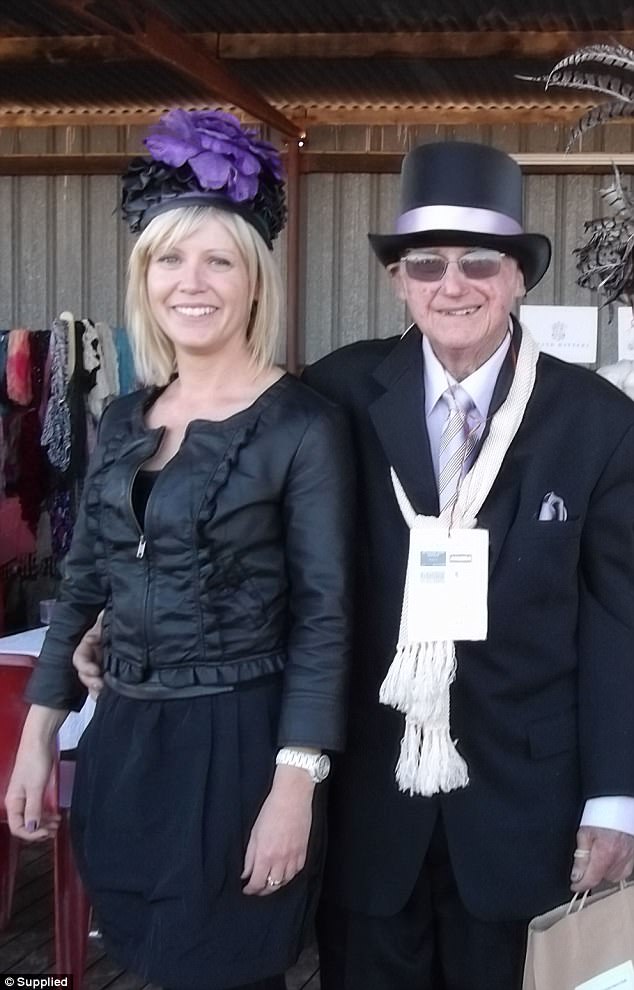 Mrs Priestley’s daughter Claire, pictured here with Gordon Priestley, said she has been left devastated after the court ruled against her father’s final will

Duncan Priestley did not respond to Daily Mail Australia’s request to tell his side of the Salt Glen property dispute.

The dispute has been raging for years in the NSW Supreme Court and Family Court of Australia.

The family troubles peaked in 2004 and ended in the couple splitting and the family lands being split between their children. In 2012 Gordon died and the dispute flared up again.

Duncan Priestley, 55, took his mother, as executor of his father’s estate, to court for unpaid costs for years he spent working on Salt Glen, and a share in the property’s water licence after the property was left solely to Mrs Priestley.

Duncan claims his father told him in 1986: ‘One day all of this will all be yours’ – meaning he would pass ownership of the property to him exclusively, according to court documents. 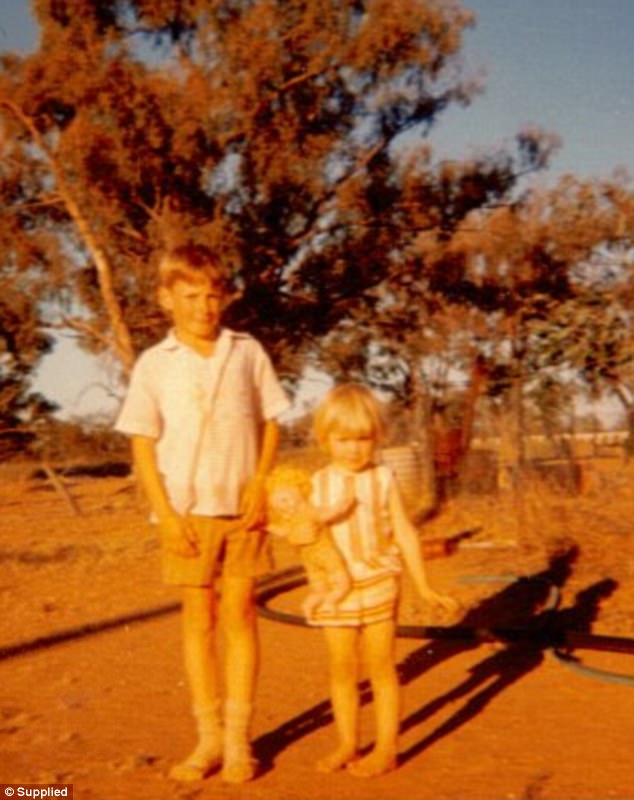 Claire believes she and her brothers, Chris pictured, were given a great childhood

Duncan says he quit his well-paid job as a surveyor and helped his father with jobs on the farm because he believed it would be given to him when his father died, and he would not have to share it with his mother, his brother Christopher, 53, or his sister Claire, 48.

So when his father Gordon called him to his death bed in February 2012 and told him the farm was to be shared and he was to ‘look after’ his family, he was furious.

In an affidavit tendered to the court, Duncan Priestley reveals a heated argument he had with his father after finding out the property would be shared.

‘We have already paid them out once,’ Duncan said to his dying father.

‘I’ve kicked them off (the land) once and I’ll kick them off again,’ he said.

‘No you wouldn’t,’ Gordon said.

But his son was adamant: ‘Bloody oath I will.’

‘You look after them,’ the dying father said. 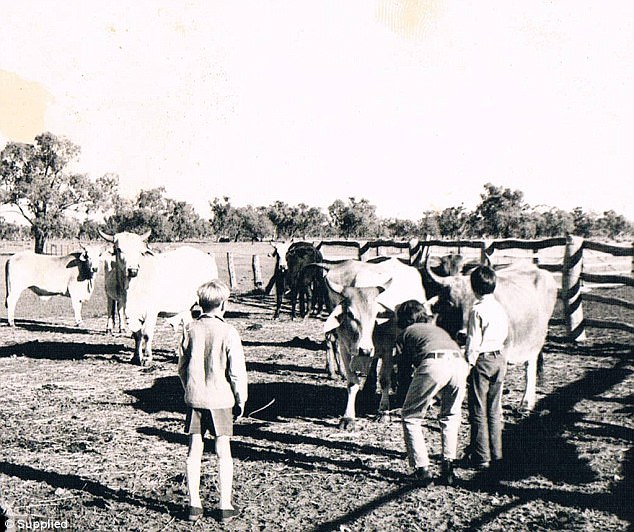 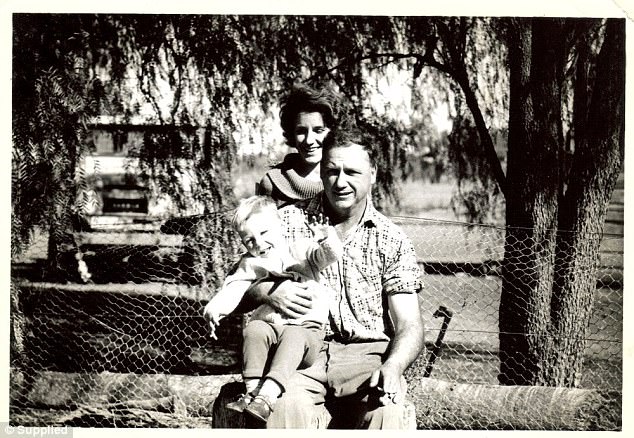 Gordon and Beverley Priestley divorced in 2004 after the heat of the family feud became too much. Mrs Priestley had sided against her husband and son Duncan and with her two younger children which ultimately ended her marriage.

As part of the settlement, the greater Salt Glen lands were split into three.

Duncan supported his father throughout the proceedings, paying his legal fees and other expenses.

Claire, Christopher and their mother took on the family irrigation lands (which have since been lost to the bank) while Duncan and his father ran Salt Glen and the adjoining property, Caramba.

‘The farm was divided. Chris and I got the good irrigation country but had to take on the family debt, which was $2.3million, and Duncan and dad ran the rest,’ Claire said.

‘That’s when dad changed his will and told Duncan he would get Salt Glen.’

‘He was in dad’s ear all the time telling him how we were doing everything wrong,’ Claire said. 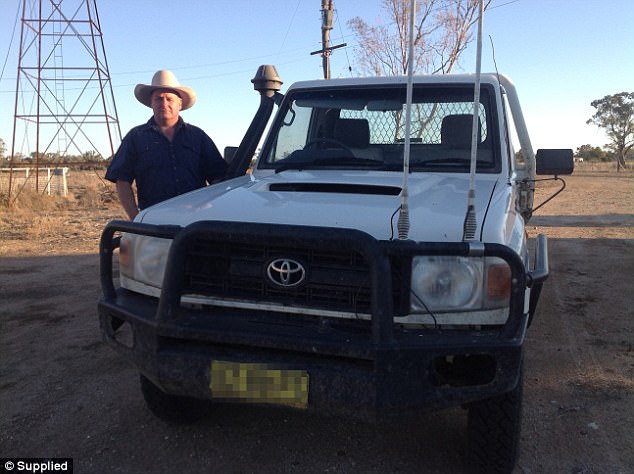 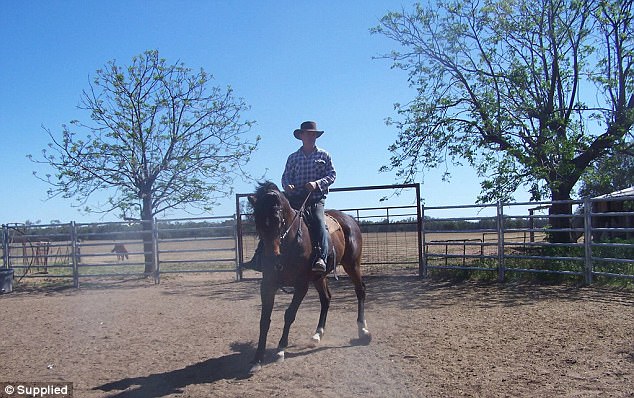 Mrs Priestley doesn’t think she will be able to mend her relationship with her eldest son Duncan, pictured 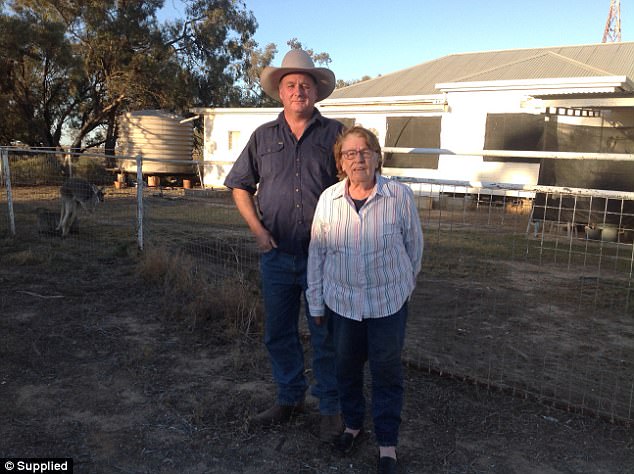 Gordon went to his lawyer’s office to have the irrigation lands signed over to Christopher and to give Duncan full control of Caramba, according to court papers.

The lawyer, Roger Butler, phoned Duncan to let him know the changes had been made, the conversation was tendered in an affidavit to the court.

‘Duncan, it’s Roger Butler here. Your father and I have just settled all the land transactions and transferred the rest of Caramba to you. He has also changed his will so that everything goes to you. Apart from the land swap with Christopher, everything is wrapped up.’

Gordon and Beverly Priestley remained friendly after their divorce, and by 2007 he had reconciled with Claire, Chris and his ex-wife. He then changed his will into four even parts.

But he didn’t tell Duncan. 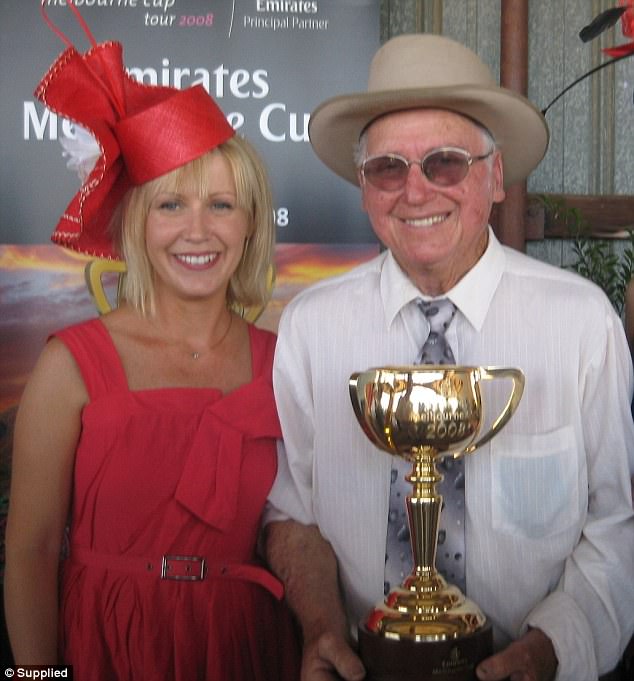 Claire and her father, pictured here long after the family feud of 2004 was forgotten by most members of the family 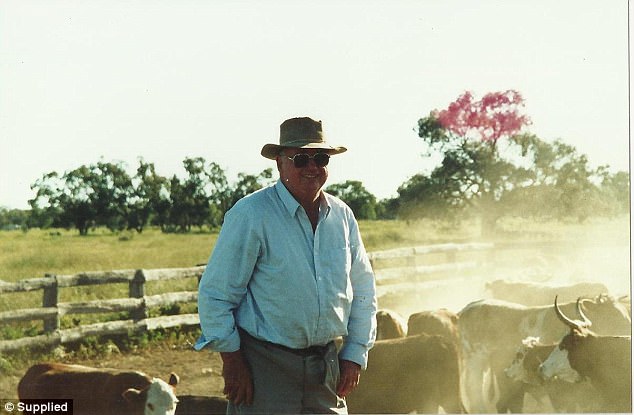 Gordon Priestley in the cattle yards before his death 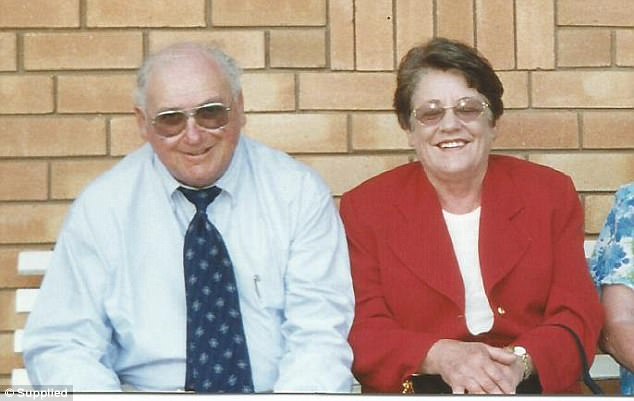 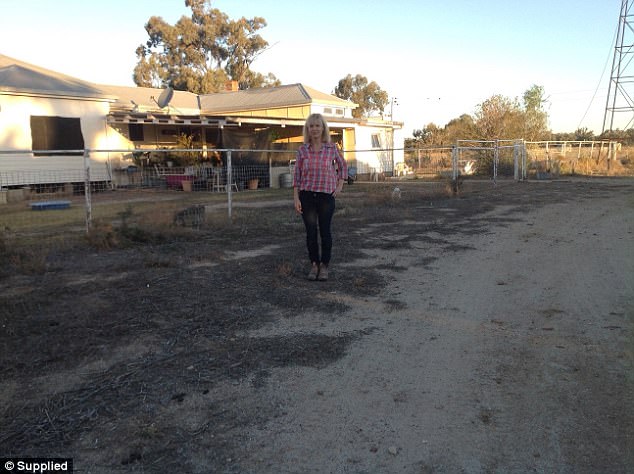 Mrs Priestley says that before her ex-husband died he asked her if she would be buried with him as husband and wife.

‘He is the only man I ever loved,’ Mrs Priestley said.

‘When he asked me if I would be with him I said yes, so they dug his hole deep enough for me to go in there too.

She doesn’t think she will ever be able to ‘fix things’ with her eldest son.

‘After all this it is too late to reconcile with Duncan. For years I have tried. I have called him on his birthday and other things but he doesn’t pick up the phone. 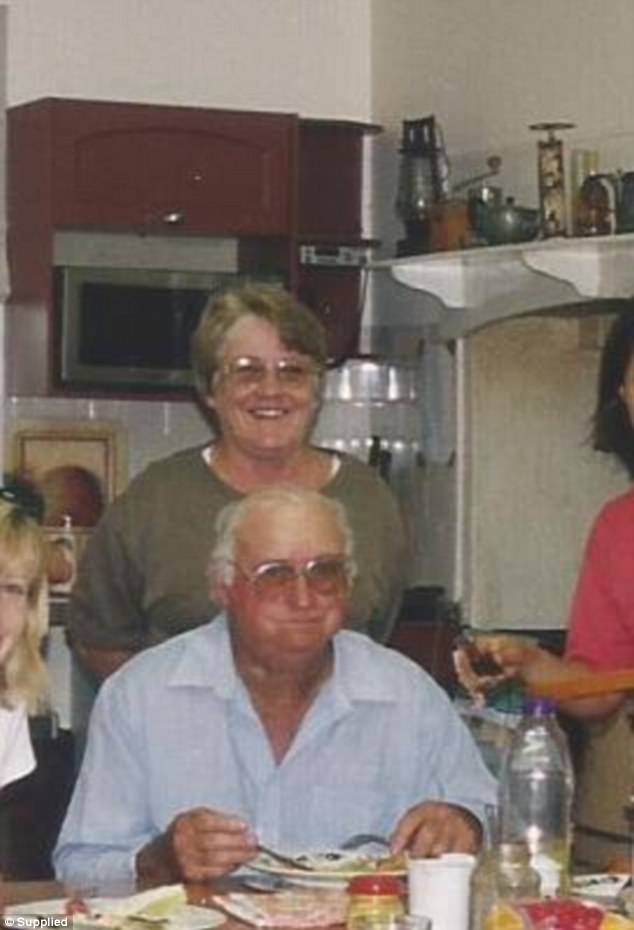 Mr Priestley, pictured, wanted to leave a will with four equal shares, but after his youngest two children ran into problems with the bank it was decided it should go to Beverley 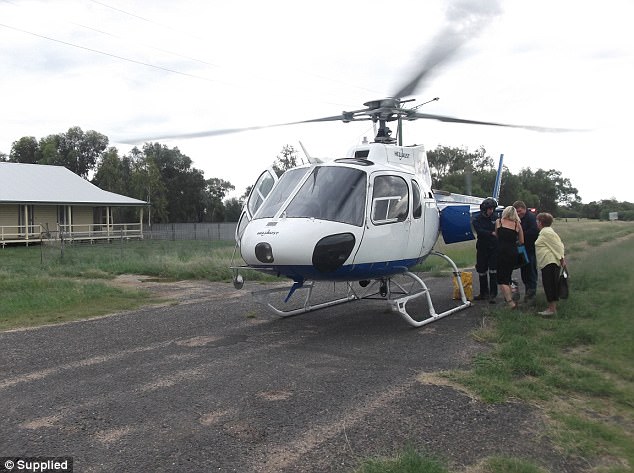 The grandmother, pictured here in yellow, had to fly in to her ex-husband’s funeral when the lands around Salt Glen flooded in 2012 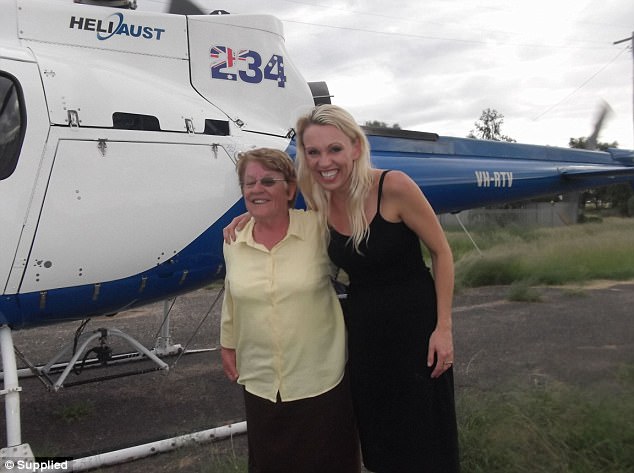 Mrs Priestley pictured with a family friend at Gordon’s funeral 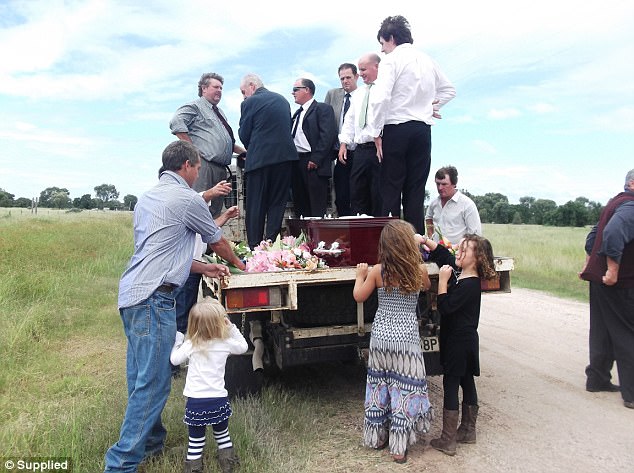 The ruling that has landed Duncan Priestley with the $3million property came after he appealed an earlier court ruling that Beverley should pay him $293,071.98, plus interest, for back pay and a share in the family water licence.

‘I just don’t understand how one judge can find he is owed $300,000 and then in an appeal he is given the farm which is worth millions,’ Claire said.

‘Or how the judges can overlook mum who has lived here for most of her life and will have nowhere to go.’ 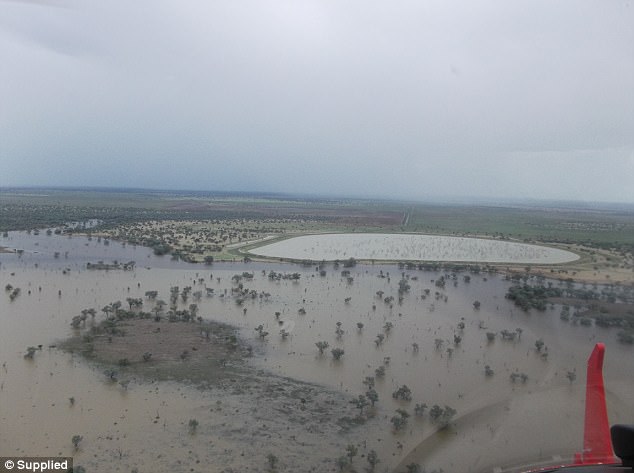 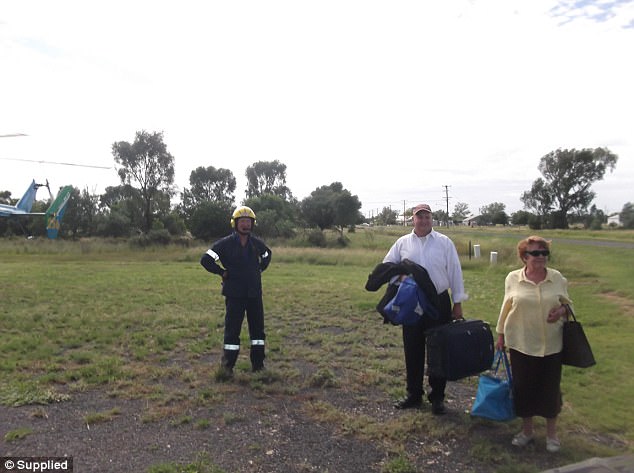