Granit Xhaka is not letting news of his long-term knee injury dampen his spirit as the Arsenal star was pictured in the gym sporting a leg brace amid his three-month lay off.

Swiss midfielder Xhaka is facing a long spell on the sidelines after a collision with Spurs winger Lucas Moura during Sunday’s North London Derby which has left him with ‘significant’ damage to the medial ligament in his right knee.

Xhaka, 29, saw a specialist on Tuesday where he learnt that he does not need surgery for the injury, and the midfielder has been pictured wearing a leg brace as he got back to work in the gym. 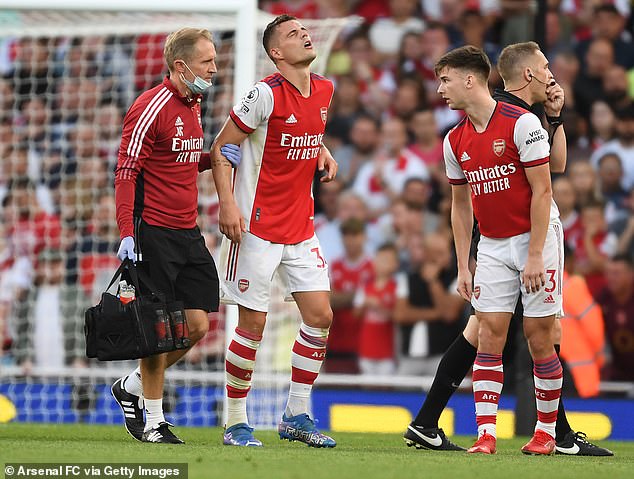 The Arsenal star, 29, will be out for three months after injuring his knee against Tottenham

Posting to his Instagram account, Xhaka uploaded an image of himself on an elliptical with the caption: ‘The recovery starts now’.

The 29-year-old was seen being put through his paces alongside Gunners team-mate Sead Kolasinac, who was not named in Mikel Arteta’s squad for the 3-1 victory over Tottenham at the Emirates.

Arteta praised Xhaka’s ‘top mentality’ and believes his ‘strong mind’ will allow the Swiss to return in ‘the right place’.

‘First of all it is a significant injury but he probably escaped an even worse injury than he could have had because that action for the cruciate ligament is a tricky one. 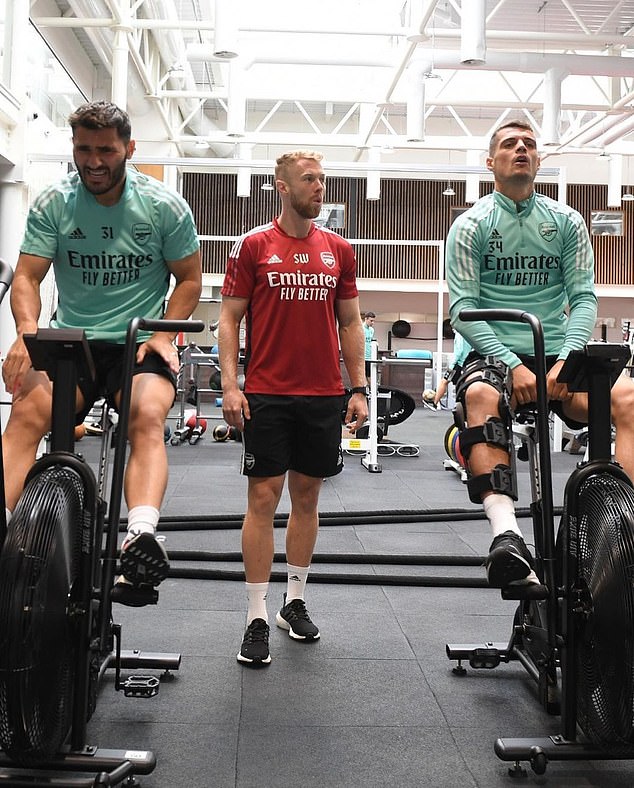 ‘His mentality is top. He knows what he needs to do. Hopefully he can escape surgery as well which is something really, really important and after that just start preparing himself in the best possible way because time flies.

‘Obviously it is really bad news personally for Granit because he has had a couple of incidents already this season with Covid, the suspension and now with the long-term injury.

‘But he has a strong mind and will use this time to focus on other things and I’m sure that he will be back in the right place when he is back but he is a big player for us, someone really important and he will be missed but other players have to step in.’

The Gunners have several options to replace Xhaka as they prepare for a trip to Brighton on Saturday, including Ainsley Maitland-Niles, Albert Sambi Lokonga and Mohamed Elneny.